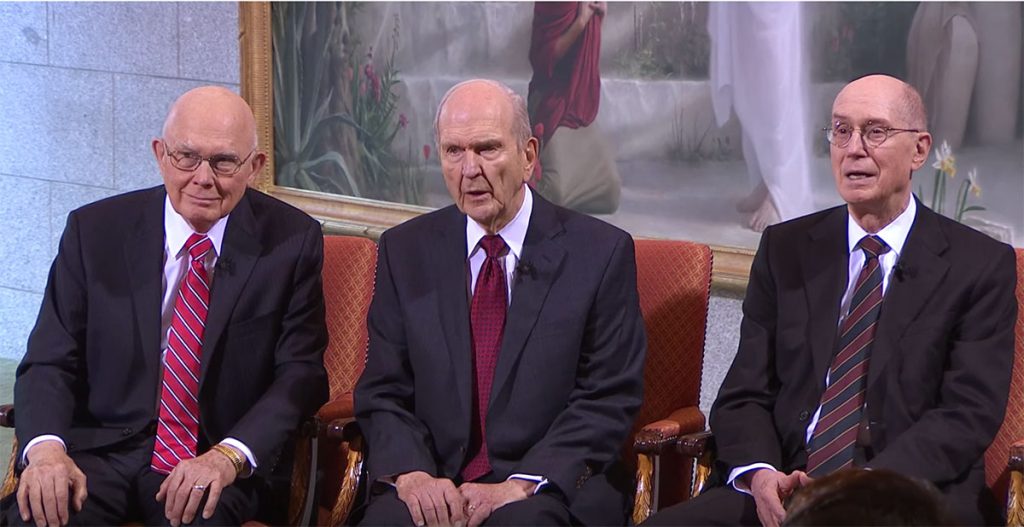 President Russell M. Nelson was officially named the next prophet of The Church of Jesus Christ of Latter-day Saints on Tuesday morning. He called President Dallin H. Oaks and President Henry B. Eyring as his first and second counselors in the First Presidency, respectively.

“As a participant, I must say it was a sweet, sacred experience in which the Lord’s will was clearly manifest and all were in full accord,” Elder Christofferson said. “This experience, once again, affirmed that Jesus Christ directs His church.”

Following the meeting, the Quorum of the Twelve Apostles set apart President Nelson as the prophet.

[pullquote]”We are His servants. I declare my devotion to God, our Eternal Father, and to His son, Jesus Christ. I love them and pledge to serve Them and you with every remaining breathe of my life.” — President Russell M. Nelson, LDS Church prophet[/pullquote]

During his 34 years of service as an apostle, President Nelson has served under five previous Church presidents.

“I have watched each president receive revelation and respond to that revelation,” President Nelson said. “The Lord always has and always will respect and inspire his prophets. The Lord is at the helm.”

President Nelson addressed the process of choosing a prophet, a role that lands on the most-senior apostle.

“As we go forward together, I invite you to think about the majestic manner in which the Lord governs His church,” President Nelson said. “When a president of the Church passes away, there is no mystery about who is next called to serve in that capacity. There’s no electioneering, no campaigning, but only the quiet workings of a divine plan of succession put in place by the Lord himself. Each day of an apostle’s service is a day of learning and preparing for more responsibility in the future.”

The 93-year-old prophet proclaimed his commitment to serving in the Church for the remainder of his life.

“We are His servants. I declare my devotion to God, our Eternal Father, and to His son, Jesus Christ,” President Nelson said. “I love them and pledge to serve Them and you with every remaining breathe of my life.”

President Oaks, 85, was called as the first counselor in the First Presidency. He has served as a member of the Quorum of the Twelve Apostles since May 1984. Prior to his service as an apostle, he was president of Brigham Young University from 1971 to 1980, and a justice of the Utah Supreme Court from 1980 until his resignation in 1984 to accept his calling as an apostle.

“I rejoice in the opportunity to give my full efforts to bear witness of Jesus Christ and to proclaim the truth of his restored gospel,” President Oaks said in his brief statement.

“The growth in the number of members that are spread across nations, kindreds, tongues and peoples are visible miracles, but the greater miracle — and the one we’ll accelerate — is the growth in faith in Jesus Christ,” President Eyring said. “The Lord has prepared and chosen President Nelson to lead in that growth. He knows and loves the Lord.”

“The First Presidency will work hand-in-hand with the Twelve to discern the will of the Lord and move His sacred work forward,” President Nelson said.