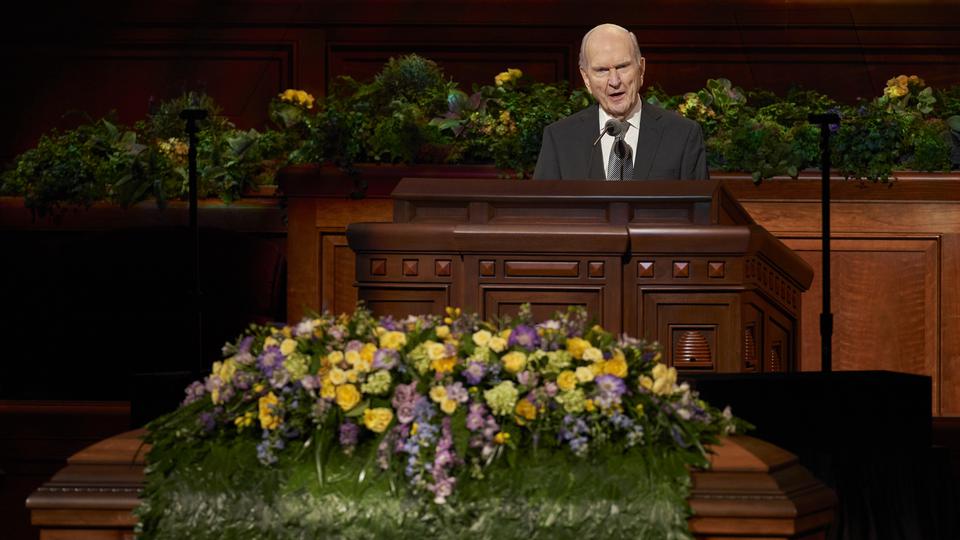 (Photo courtesy of Mormon Newsroom, because I had lunch with him way back before I had an iPhone and could take pictures easily.)

Of course, at the time he was Elder Russell M. Nelson. He came to BYU-Idaho to give a devotional address on education. And before he spoke, 14 of us students sat down to eat and ask him questions.

I thought of that day today as I watched President Nelson give his first address as president of the Church. My husband and I have changed a lot since then — we were newlyweds of six months at the time; now we’re anticipating the birth of our fourth — fourth! — child. But I could see and feel that what I learned about President Nelson that day is as true now as it ever was. Here’s what I learned:

President Nelson has been prepared.

Someone in the room asked President Nelson what it was like to serve with the other men in the First Presidency and Quorum of the Twelve Apostles. He said, “I still have to pinch myself.” And then he proceeded with the most fantastic display of name-dropping I’ve ever heard, talking about sitting in conversation with Elder Neal A. Maxwell and other great leaders of the Church.

When President Nelson was called to the Twelve, there was an entirely different group of men serving in the highest councils of the Church. Today, he leads 12 men who have been called since that day. And he’s learned something unique from each one of them that has prepared him for the calling he now holds.

President Nelson is a seer.

I don’t know how to say this without sounding dramatic, but I learned that President Nelson can literally see the future. Someone asked him what challenges the Church would face in coming years, and he said, “Growth.” Then he described a day in the future of full-time missionary service when tracting would be a thing of the past, and when missionaries would not have time to find investigators. He said the world is becoming darker, and as it does, people will seek more earnestly the light. He said the missionaries would spend all their time teaching people who came to them.

It was a crazy thought then, and it still seems a little crazy now. But he spoke with authority, and I knew that he had a source of understanding and power that I still don’t understand. What I’m trying to say here is that when we say he’s a prophet and seer, it’s completely true.

Being the budding journalist I was at the time, I came prepared with questions. I asked President Nelson, who I knew had a large family and demanding career in addition to his Church leadership callings, how he had managed to balance his time as a young father. I asked how we could balance these demands as parents ourselves.

His eyebrows knit together a little as I talked, which showed me how intently he was listening and thinking about his answer. Then he referred me to the scriptures. “There’s a scripture in the Doctrine and Covenants, where the Lord is speaking to Hyrum Smith. It’s in section 23, in the left-hand column, about halfway down the page.” His eyes were unfocused, as though he were imagining the page in his mind. “It says that Hyrum’s duty is unto the church because of his family.” He explained what this meant for him and for us. That scripture is still marked in my scriptures today.

When lunch was finished and it was time to walk to the devotional, Elder Nelson asked our host if we had time for him to shake each of our hands. He took the time. He expressed his love. And after accurately predicting the gender of our friend’s baby with a friendly, “Take care of our girl!”, we walked across campus. (Remember what I said about his ability to see the future? Our friends couldn’t have known the baby’s gender yet, but he did.)

He addressed the student body and talked about the importance of education. And even though I agreed with everything he said that day, the education I gained during that one-hour lunch with a future prophet taught me more than a whole semester of classes.

What to expect from BRT construction in 2018 Next post