Home Featured What to expect from BRT construction in 2018

What to expect from BRT construction in 2018 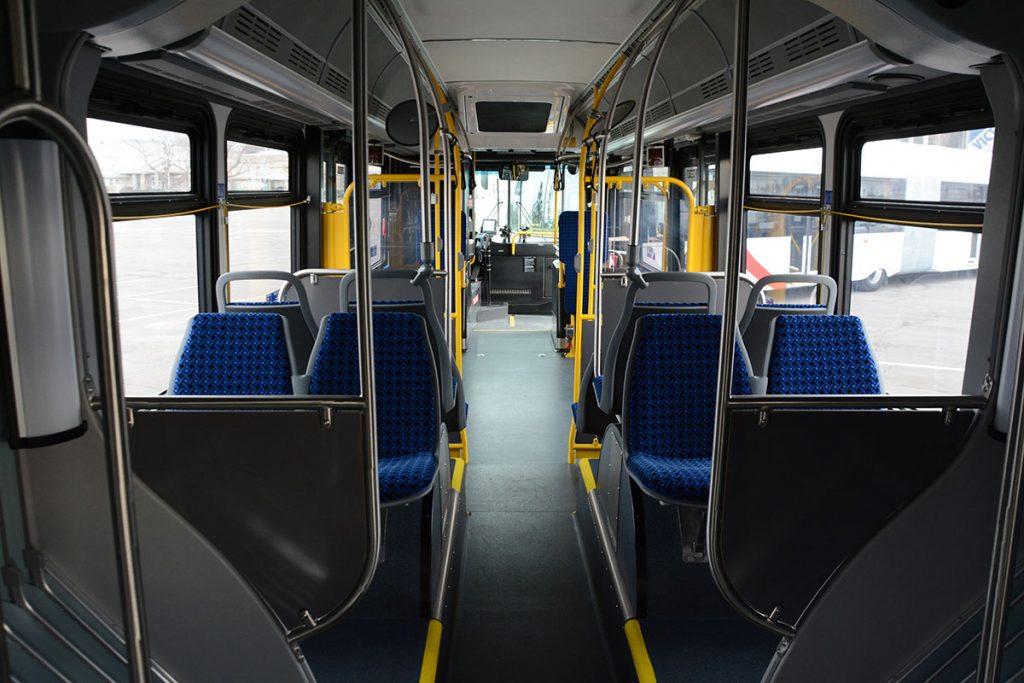 UTA showed off its new buses for the Bus Rapid Transit program in December 2018. (Photo by Rebecca Lane/UV360)

There is road construction everywhere, or at least that is how it has seemed while the Utah Transit Authority has worked to complete the Bus Rapid Transit system.

A project that will bring a quicker method of public transportation to Utah County, BRT construction has caused Provo and Orem’s busiest roads — University Parkway and University Avenue — to be ripped apart for expansion and improvements over the past few years. But now an end is in sight. UTA promises that BRT will be running by Monday, Aug. 13, 2018.

“We’re committed to that, so we have our construction crews really working hard,” said Marc Bowman, UTA public relations specialist.

The BRT project is UTA’s effort to plan for the future. Utah County is expect to double in size over the next 20 years, which will bring the population size to more than 1 million people.

Construction is just part of the growing pains that comes with planning for the future, according to Bowman.

But it has been a necessary challenge. In an effort to communicate with the community, UTA is sharing the message “shop on” on its social media platforms. The message in meant to encourage residents to continue to shop at local stores in construction areas, such as in downtown Provo.

[pullquote]“Even if you don’t ride the bus or use transit, it will benefit you because it will take cars off of University Parkway and reduce congestion.” — Marc Bowman, UTA public relations specialist[/pullquote]

“Our team is working really hard to make sure that everybody knows (local businesses) are still open during construction,” Bowman said.

In 2017, construction workers widened the road on University Parkway and worked on 700 North in Provo, which needed to be completely rebuilt for this project.

“The first 60 percent was a lot harder than the remaining 40 percent,” Bowman said.

With the hardest part behind them — including taking care of utilities — UTA will focus on organizing the bus lanes and building the BRT stations before the grand opening in August.

“More of what you are going to see now with the start of the new year,” Bowman said, “is along the parkway in Orem they will be shifting traffic to the outside where they’ve widened the road and start working on the bus lanes and the stations in the center of the road.”

There will be 18 stops throughout Provo and Orem on the BRT route. UTA is constructing ticket machines for the stations. Also, UTA is looking at options to redirect current bus routes to align better with the new BRT route.

UTA anticipates that there will be an average of 10,000 trips per day on the BRT line. As of now, the BRT line won’t run on Sundays since BRT is set up to run on the FrontRunner schedule, which does not run on Sundays. However, the bus’ daily schedule will have expanded hours outside of the other bus systems. Bowman says the exact hours aren’t set yet, but UTA is considering hours from 4 a.m. to 1 a.m. the next day.

Many of those riders will be university students and staff at Provo’s Brigham Young University and Orem’s Utah Valley University. In December, UTA announced a partnership with the two universities to provide free premium UTA passes for the next 10 years.

“It provides a lot of options for college students to get around,” Bowman said. “For people who are looking for another way to get around or don’t own two cars, maybe who can’t afford two cars, it gives them a better option because it comes every six minutes and connects to the rest of the UTA systems.”

“Even if you don’t ride the bus or use transit, it will benefit you because it will take cars off of University Parkway and reduce congestion,” Bowman said.

Utah-Tube: 'Studio C' gives dating tips from 'under the sea' Next post