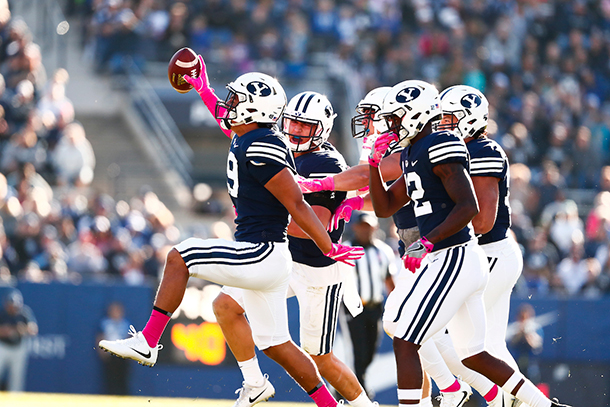 BYU football players celebrate during the game against San Jose State at LaVell Edwards Stadium on Saturday. In its second win of the season, BYU beat San Jose State 41–20. (Photo by BYU Photo)

BYU football released its 2018 schedule — which includes three matchups with top-25 teams and eight games against bowl teams from this past season — on Wednesday.

The independent football team’s schedule features games against schools from 11 different states and five conferences: Big Ten, Pac-12, Mountain West, Mid-American, Southland. Three teams were ranked in the top 25 during the 2017 season, including No. 6/7 Wisconsin, No. 15/16 Washington and No. 22 Boise State.

During the 2018 season, BYU will play two in-state rivals: University of Utah and Utah State. The Deseret Duel will take place during Thanksgiving weekend and will be the last game of the season on Nov. 24.

Notably, BYU will play almost all of its 2018 games on Saturdays with the only exception being the game against Utah State on Friday, Oct. 5. However, the exact dates of the games are subject to change to accommodate the broadcasting schedule which hasn’t yet been set.

BYU will spend the entirety of October in Provo with its three scheduled games. The team will have its bye week during the week of Oct. 20.