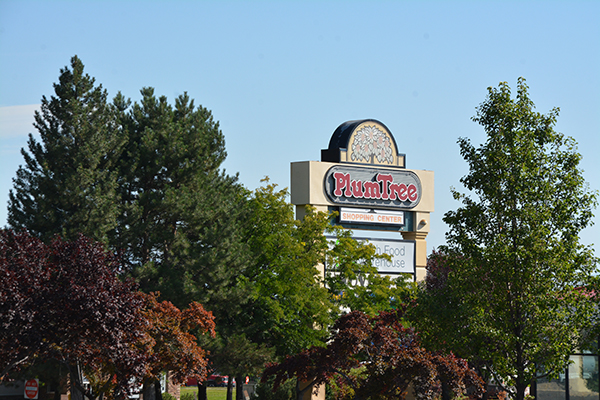 Plumtree Plaza will be demolished and reconstructed in 2017. (Photo by Rebecca Lane/UV360)

Provo has received multiple awards for being the best place to live, the best place for startups and so on, but Provo doesn’t plan to maintain that status through its growth.

“We’re not looking for growth just for growth sake. What we’re looking for is providing amenities, opportunities and experiences for our residents and visitors in our ever competitive world,” said Dixon Holmes, Provo deputy mayor over economic development. “Again, I hope we would never grow just for growth sake, but our population is growing — it’s not growing as fast as it used to, several communities probably grow faster than Provo now. There’s still a lot of momentum. … People want to be here and people are already here.”

The Mix, which is the new development going in at Plumtree Shopping Center, has hit some road blocks in its beginning stages, but Holmes says, “They will have commenced in earnest in 2018.”

Starting in the fall, Provo High School students will have a new home on the west side of the city. The new Provo High location, at 1300 N. Lakeshore Drive, is a 43-acre plot of land — an increase of 25 acres from the former campus.

In February, Intermountain Hospital will open its Sorenson Legacy Tower. The new building houses various clinics, which consolidates hospital services. There will be 28 different clinics available under one roof. Plus, the fourth floor will house the new LiVe Well Center, which is dedicated to helping people live healthier lifestyles.

“We are always looking at improving a patient’s experience,” says Janet Frank, spokesperson for the hospital, in a press release. “Having these services all in one spot will allow for a more convenient visit.”

In the past six months, the Shops at Riverwoods added six new businesses: Rodizio Brazilian Grill, TrueRest Float Spa, Moon’s Rare Books, Ike’s Creamery, Seven Brothers Burgers and The Crepery. The Riverwoods plans to continue to add businesses in 2018, including R&R Barbecue. More businesses will be announced later this year. Plus, AMC Theaters acquired the Wynnsong Riverwoods theater.  Across from The Shops at Riverwoods, on the south side of 4800 North, approximately 240 new apartments will be built with construction starting later this year.

East Bay has new owners and they will work to fill that shopping development in 2018. As of now, Provo has a tenant for the building between Staples and Sportsman’s Warehouse, but Provo isn’t announcing the business yet.

In 2018, Provo will see a variety of new hotels popping up around town. In downtown Provo, Hyatt Place is going in across the street from the Marriott and should be open towards the end of the summer. Then a Marriott Residence Inn — which will have more than 100 rooms — will also open by Provo Towne Center near the end of the summer.

Besides the hotel, Provo Towne Center doesn’t have any specific announcements for 2018, but Holmes says there will be announcements to begin work at the mall.