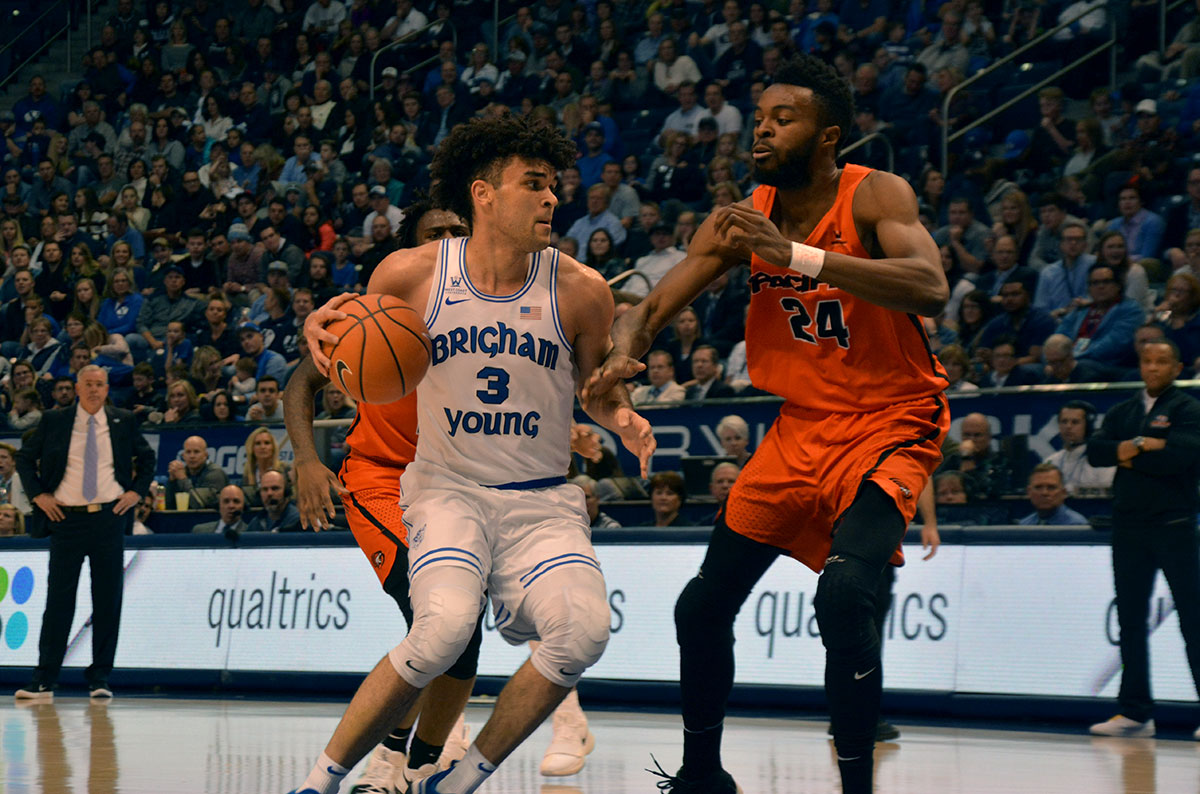 BYU junior Elijah Bryant drives to the basket against a Pacific defender. Bryant led the Cougars in scoring with 28 points. (Photo by Rebecca Lane/UV360)

BYU basketball stumbled through the first half then returned with an offensive vengeance in the second half to secure a 80–65 win over Pacific Saturday night in the Marriott Center.

“It was a battle all the way to the end,” said BYU coach Dave Rose. “It’s going to look like a 15-point game on the ticker, but that was a really competitive basketball game.”

The Cougars struggled in the beginning of the game to find a rhythm. One reason was BYU didn’t start BYU sophomore Yoeli Childs for the first time this season because of an illness that had kept Childs out of practice the past two days. Rose hoped to limit Childs’ minutes, but ended up still playing him for 33 minutes. In an uncharacteristic fashion, Childs only scored six points in the first half in 13 minutes of play.

However, the Cougars finally found a rhythm when BYU sophomore Payton Dastrup subbed into the game and hit a 3-pointer with 9:22 remaining in the first half. BYU battled back and forth with Pacific — a half that included six lead changes — until Pacific led 33–30 at the half.

“Our bench saved us tonight,” Childs said. … “It’s huge when guys can come off the bench and make the plays the way they do. I’m just proud of our guys. It’s a team win. It’s not about a single guy, even though (Elijah Bryant) played pretty good, it’s about the team. And every single guy came in and stepped up and played their role.”

Then the Cougars returned in the second half with a renewed energy. And, with 12:25 remaining, the Cougars finally took the lead at 46–44 and held the lead through the end of the game.

“I think I just try to focus on what I can control during a game,” Bryant said. “Whether I make it or miss it, I’m on to the next play as fast as possible even if it goes in.”

Things got messy in the second half. Pacific earned two flagrant fouls — one by Jack Williams and another by Roberto Gallinat in the last three minutes of the game. BYU sophomore TJ Haws hit all four free throws he shot because of those flagrant fouls.

“Both teams wanted to win, so I think you saw that emotion come out and the refs did a great job controlling it and they settled it down,” Bryant said.

Utah-Tube: Cosmo and Cougarettes recreate viral dance with Ayo and Teo Next post