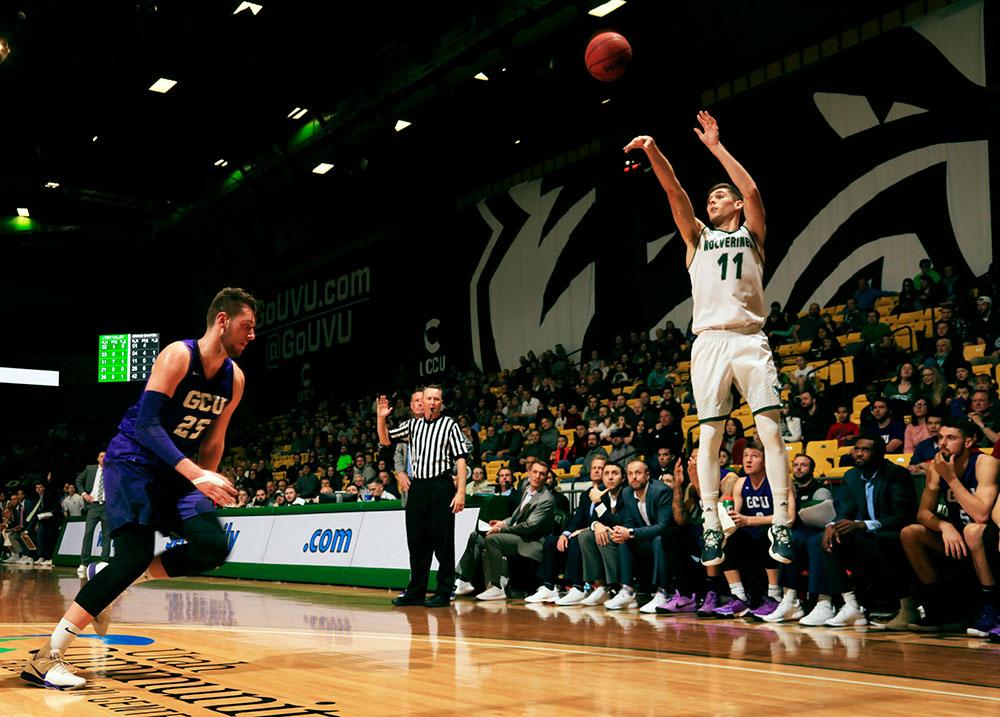 UVU men’s basketball clawed itself out of a 12-point deficit to beat Grand Canyon 68–56 Saturday afternoon.

“There’s no doubt that this was a whacked-out game, but we’ll take it every single day if we can have it,” said UVU head coach Mark Pope in a press release. “GCU is a really good team, they were picked to finish first in the league. This was a great win for us because we protected home and we’re 12-1 (at home) now. I’m proud of our guys because they won when nothing was going right and that’s the sign of a good team.”

UVU senior Akolda Manyang led the Wolverines with 14 points, which he scored only in the second half, and added six rebounds. Guards Conner Toolson contributed 12 points and Kenneth Ogbe added 10 points.

UVU now begins a three-game road trip. First, the Wolverines travel to Washington to take on Seattle U on Saturday, Feb. 3.

The Wolverines move to 16-6 on the season and 5-1 in the Western Athletic Conference.

And THAT is how you end a game🔥🙌🏽😉 #GoUVU pic.twitter.com/XrVDjPG1pR

UVU sophomore forward Jordan Holland recorded her first career double-double with 12 points and 12 rebounds, but her effort wasn’t enough to keep the Wolverines from losing 81-61 to Grand Canyon on Saturday.

GCU got an early lead and was up more than double UVU’s score in the second quarter. GCU started the second quarter on a 15-2 run that gave GCU a 31-13 lead. The Wolverines weren’t able to come back from that deficit.

Mariah Seals led the Wolverines in scoring with 21 points.

UVU returns home for three conference games. The first game is on Saturday, Feb. 3 at 3 p.m. against Seattle U.

After losing to Pacific earlier this season, BYU basketball stumbled through the first half then returned with an offensive vengeance in the second half to secure a 80-65 win over Pacific Saturday night in the Marriott Center.

“It was a battle all the way to the end,” said BYU coach Dave Rose. “It’s going to look like a 15-point game on the ticker, but that was a really competitive basketball game.”

“Today we lost because of mental mistakes,” said BYU head coach Jeff Judkins in a press release. “We turned the ball over and they scored baskets on the other end. We gave up layups and didn’t boxout at crucial times. We can’t win on the road when we make those kind of mistakes. We’ll learn from this game and get ready for two tough games at home next week.”

The Cougars fall to 12-9 on the season and 7-3 in the West Coast Conference.

No. 5 BYU men’s volleyball falls to No. 6 UC Irvine

“I thought we competed well for the most part tonight against a great opponent,” said BYU head coach Shawn Olmstead following Friday night’s game. “We have some things defensively that we’ll need to shore up tomorrow if we want to split the series.”

Then, after getting a slow start in the first set, the Cougars pushed the Anteaters to five sets on Saturday night. Three players finished the game with double-digit kills: Sander with 16 kills, Fernandez with 13 kills and Fa’agata-Tufuga with 10 kills.

“It took too long for us to get going tonight and UC Irvine capitalized,” Olmstead said in a press release. “I liked our fight in the fifth set, and I’m proud of the guys for that.”