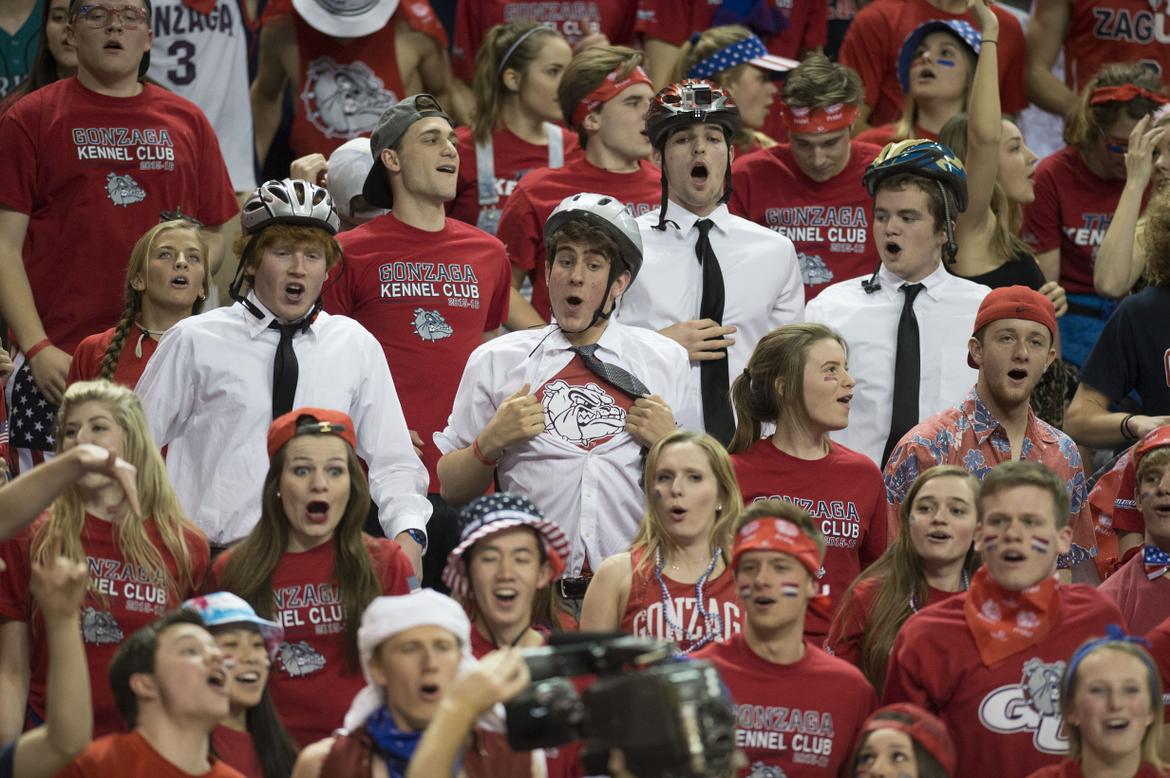 Gonzaga students dress as LDS missionaries during a basketball game against BYU in The Kennel. (Photo by The Spokesman-Review)

In the past, when BYU basketball has traveled to its West Coast Conference rival for its seasonal game, a handful of Gonzaga fans could be spotted donning a white shirt, tie and bike helmet, a costume representing Mormon missionaries. But the Gonzaga administration is encouraging students to forego the missionary attire in the BYU-Gonzaga basketball game Saturday.

On Friday, Jan. 26, the Gonzaga Athletic Department, University Ministry and Mission, Student Development, Advancement and Alumni, and the General Counselor’s Office met to discuss how they could eliminate mocking Mormons at its sporting events, according to The Gonzaga Bulletin. During the meeting, administrators devised a plan to talk to students entering the game dressed as missionaries. They won’t force them to change, but they do want the students to think about their actions.

While some members of The Church of Jesus Christ of Latter-day Saints are offended by the missionary costumes, BYU coach Dave Rose and BYU guard TJ Haws both chuckled when asked about Gonzaga’s administrative efforts.

“Students are great. It’s one of the funnest things about the game of college basketball is the students at the games,” Rose said. “The only thing I have to say about that is I served a mission years ago and I never wore a bike helmet. Maybe keep the bike helmets at home.”

Both Haws and Rose, as well as seven other players on the current BYU basketball roster, have serve LDS missions.

Haws added that the animosity in an arena is what contributes to a fun college basketball atmosphere.

“I think it’s a blast. The more fans you play in front of the better,” Haws said about playing in The Kennel. “It’s fun to have a lot of energy. It’s fun to go in a place like that where it’s hostile and there’s a lot of fans cheering against you. It really just makes it feel like college basketball. That’s the kind of stuff you watch on TV growing up. You see big arenas. You see lots of crazy fans, lots of crazy students — and that’s what you get up at Gonzaga. I’m looking forward to it. It’s going to be a good time.”

“Students are great. It’s one of the funnest things about the game of college basketball is the students at the games. The only thing I have to say about that is I served a mission years ago and I never wore a bike helmet. Maybe keep the bike helmets at home.” — Dave Rose, BYU coach

Gonzaga has been discussing the missionary mockery for years as well as possible ways to eliminate the behavior. Over the summer, the Kennel Club Board, discussed the ironic behavior from its Jesuit university. While members of the Kennel Club Board didn’t attend Friday’s meeting, club president Claire Murphy’s letter was read to attendees:

“The missionary costumes and posters that degrade the Mormon faith that show up in The Kennel every time we face the Cougars makes my stomach twist into knots,” Murphy said in her letter. “We are a Jesuit institution that stands to ‘foster a mature commitment to dignity of the human person, social justice, diversity’ and ‘cultivates in its students the capacities and dispositions for… ethical discernment, creativity, and innovation.’ How are we living up to this mission if we are tearing down the spiritual identity of others?”

The tipping point for Gonzaga’s administration was when they realized one of their own had served an LDS mission.

“When we learned that [Jesse Wade] had been recruited to come here, we had to be legit,” Colleen Vandenboom, assistant dean of Student Involvement and Leadership, told The Gonzaga Bulletin. “Like OK, we have been talking about it enough and now, not only is it embarrassing, but it’s like, really? He’s one of our community members.”

Gonzaga freshman Jesse Wade, a Utah native who graduated from Davis High School, served a mission in the France Lyon Mission — the same mission as Haws. Haws said he didn’t spend much time with “Elder Wade” — they were limited to a few exchanges and conversations — but called him a hard worker that had a knack for speaking French.

“He asked a lot about basketball, so we talked about how to really focus on what you’re doing and not worrying about ball, it will be there when you come back,” Haws said. “I was telling these guys earlier that he was a great missionary. He worked really hard. His French was great. I think he took what he learned before his mission with hard work and basketball and really took it into the mission field. He worked really hard and I heard great things after I left as well. He’s a great kid, great missionary and great basketball player as well.”

BYU coach Dave Rose said BYU recruited Wade during his high school career, but didn’t offer him a scholarship because of the number of guards BYU already had committed to the team.

BYU travels to The Kennel on Saturday, Feb. 3, to take on Gonzaga in an 8 p.m. MDT game. But first, the Cougars travel to California to take on Loyola Marymount on Thursday, Feb. 1 at 9 p.m. MDT.