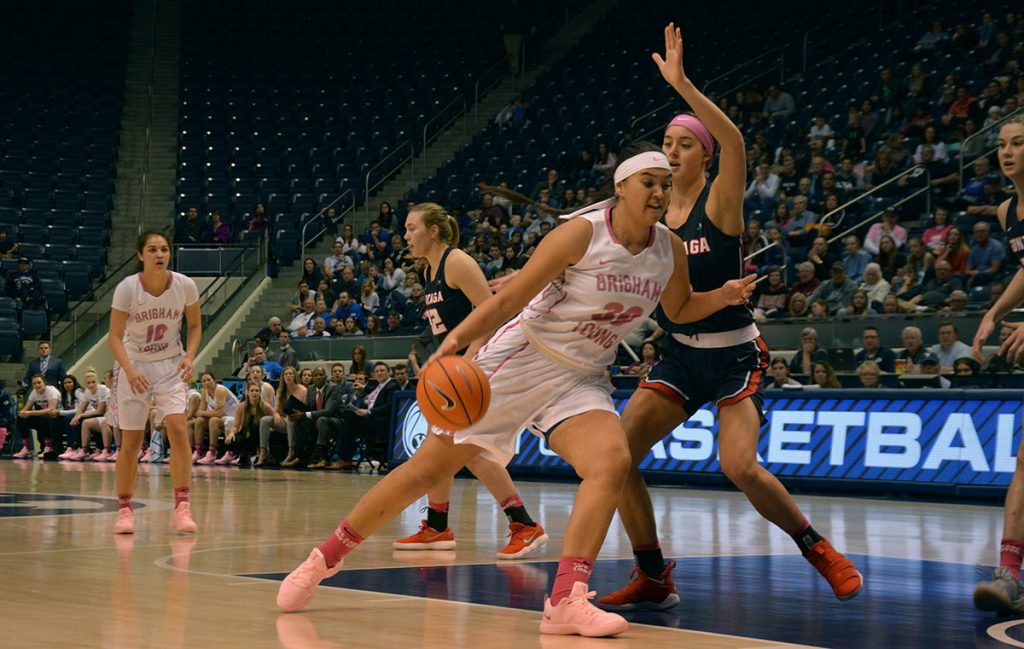 BYU sophomore Shalae Salmon drives to the basket during a game against Gonzaga. (Photo by Rebecca Lane/UV360)

After a disappointing sweep loss to No. 14 UC Santa Barbara Friday night, the BYU men’s volleyball team returned with a vengeance Saturday night in the Smith Fieldhouse.

“I just felt like we were more engaged from the start,” BYU head coach Shawn Olmstead said. “I was open last night in saying that I felt like we were waiting for things to happen, and tonight we went out and created things a little more – so I was happy with that. I thought we made better decisions overall.”

“I’m really proud of my team. We didn’t play well in the first half, but we played really gutsy in the second half,” said UVU head coach Mark Pope. “There are so many things that I was really proud of, but sometimes you just have to be one possession better and we weren’t tonight.”

In the first half, the Wolverines struggled to make shots. The Wolverines went into the locker room down 36–24. UVU outscored Seattle U 30–19 in the second half, but the offensive effort wasn’t enough to win the game.

The Wolverines continue playing on the road. Next UVU travels to Chicago Thursday night for a game against Chicago State.

UVU women’s basketball lost by a buzzer-beater to Seattle U on Saturday. Seattle U senior Alexis Montgomery hit a jumper with 1.6 seconds left to beat UVU 77–75.

“That was a heartbreaker,” said Utah Valley head coach Cathy Nixon. “You know they’re going to their best player and that’s what the best players do. We probably could’ve made an adjustment defensively, but you have to tip your cap to them for hitting that shot when they needed it. I was still really proud of the way we fought back today.”

UVU continues playing at home against Chicago State on Thursday.

BYU men’s basketball ended a three-game winning streak in Spokane, Washington against Gonzaga. The Cougars lost 68–60 to No. 14/12 Gonzaga.

“The last couple games we had lost our physical edge and I thought tonight it was a challenge for our guys to come out and show toughness,” said BYU head coach Dave Rose. “It’s difficult to lose that one but the guys played hard and played together.”

Prior to Saturday night, BYU was one of the few teams that had beat the Bulldogs in The Kennel, which included a win when Gonzaga was ranked No. 1 and remained undefeated at the end of season play.

With the two losses last week — BYU also lost to Loyola Marymount on Thursday night — the Cougars fall to 18–7 and 7–5 in the West Coast Conference.

“I knew we needed to to play one of our best games to beat them,” BYU coach Jeff Judkins said following the game.

“We weren’t capitalizing very well. We didn’t have a good flow. We weren’t able to get multiple stops in a row and we really rely on that,” said BYU senior Cassie Broadhead Devashrayee, who led the Cougars with 24 points. …“Coaches prepared us, we knew what we were doing, but we didn’t execute and that was our fault.”

BYU next travels to Santa Clara and San Francisco on Thursday and Saturday, respectively. Read a BYU-Gonzaga game recap here.

Forbes names Provo-Orem No. 2 best city to invest in housing Next post