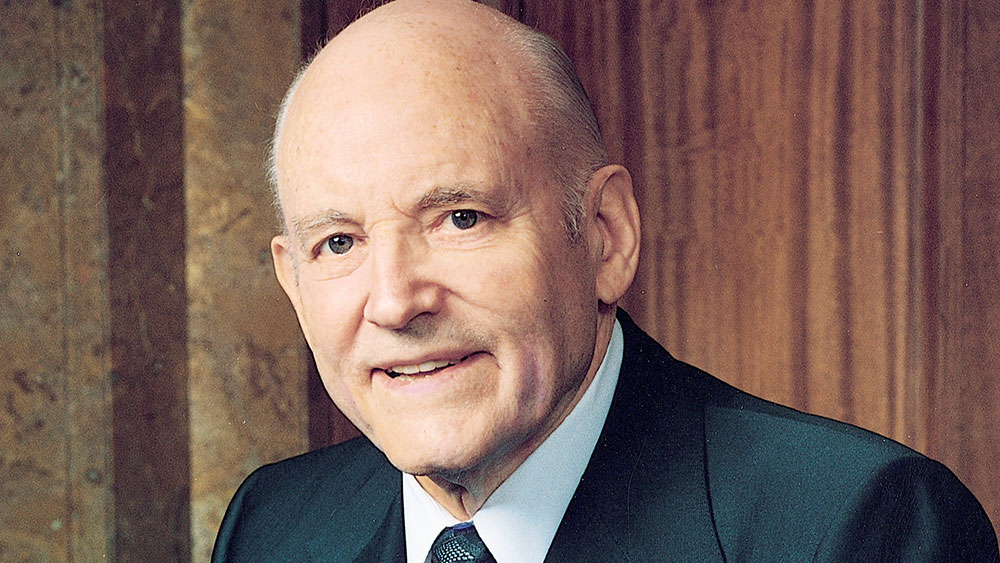 During a fireside with President Howard W. Hunter, President of the Quorum of the Twelve Apostles, a man entered the Marriott Center claiming to have a bomb. (Photo courtesy of history.lds.org)

It was a quiet Sunday evening in the newsroom of the Daily Universe on BYU’s campus.

As the assistant sports editor, I was putting together the sports pages for Monday’s paper while other fellow editors were working on their own pages on Feb. 7, 1993. On the television screens, the BYU devotional, featuring President Howard W. Hunter, President of the Quorum of the Twelve Apostles, was starting.

I remember feeling a little bit guilty for not being there. I usually attended the firesides, but on that night, I was required to work. But I figured that the next best thing would be watching the devotional on the television in the newsroom.

Just a few minutes into President Hunter’s address on adversity (the title was “An Anchor to the Souls of Men”), the live television feed dropped and the screen went black. We figured it was due to technical difficulties — until the police scanners started going crazy.

To our shock and horror, we learned from the scanners that President Hunter was being threatened by a man that had marched to the podium at the Marriott Center claiming to have a bomb.

The newsroom quickly transformed into a storm of activity as we tried to figure out what was going on and knowing that our paper would look much different than we had been planning because of this big, breaking news.

All of us that were in the newsroom, and even those who weren’t scheduled to work that night, gathered as much information as possible from the scanner.

In those days, of course, there was no social media, no camera phones, no texting, no Snapchat.

The incident lasted only about 10 minutes, though for those who attended and followed what was going on, it seemed much longer.

The 27-year-old man who was threatening to detonate a bomb was named Cody Judy and he carried a briefcase in one hand and he brandished a black device in the other. He told everyone on the stand to leave the area, except for two Church security officers.

Judy gave President Hunter a letter to read aloud, but he refused.

Judy’s letter called for the release of the First Presidency and Quorum of the Twelve Apostles with Judy replacing President Hunter as the Church’s new prophet.

Inside the Marriott Center, some cried as they watched it all unfold. Then the 17,000 in attendance spontaneously began singing “We Thank Thee, O God, for a Prophet.”

The students’ singing seemed to distract and confuse Judy.

At some point, a student sitting in the front row sprayed Judy with mace and the security officers apprehended Judy and yanked him off the stage. A group of students lunged toward Judy as well before he was handcuffed and arrested by BYU police officers.

After Judy was removed from the Marriott Center, President Hunter picked up his talk where he left off and seemed calm, unscathed and unruffled, as if nothing had happened.

Later we found out that books and a radio were found inside Judy’s briefcase. The bomb squad destroyed the briefcase as a precaution. The device he held in his hand turned out to be a cordless phone wrapped in black tape.

Meanwhile, back in the newsroom, we continue to work. We had a new reporter there to cover the devotional while other reporters not working that night were in attendance as well. When the devotional ended, Daily Universe employees convened in the news room to figure out how to present this news on a tight deadline. We talked to eyewitnesses to the incident and worked on the main story and a few sidebars. It was a truly collaborative effort.

A compromise was struck. The advertisers got to keep part of the front page and also agreed to add pages to allow us to provide expanded coverage of the ordeal.

“Terrorist interrupts fireside” was the headline emblazoned across the top of the front page. Below was a photo of Judy holding the “detonator” close to President Hunter’s head, sharing space for the “Sweetheart Edition.”

About that photo — only one photographer was there that night, a freshman named Nathan Sieter. Remember, people didn’t have camera phones back then. Sieter captured the only images of the incident and those photos were aired on television and published in newspapers around the country, such as USA Today. He had captured an exclusive and the Daily Universe received some national attention. I doubt that a BYU fireside had ever received national coverage before that night — or since.

Being the assistant sports editor, I tried to find a sports-related angle to the story. Having heard several BYU football players had been among the students to jump in and attack Judy, I made my way to the Richards Building a couple of days after the incident.

There had been some public criticism of those students and the players I talked to were reluctant to talk. They spoke to me only on the condition that I not print anything they said. One said they reacted that way only because they wanted to stand up for and protect the beloved man they considered a prophet. It was a gut reaction.

“Can you tell me anything on the record?” I asked.

“On the record? I don’t know anything about it,” one player said with a smile.

Judy was convicted of threatening President Hunter and was granted parole from the Utah State Prison in 1999. In 2002 Judy ran for the U.S. House of Representatives, but did not win the seat. In 2016, he ran for President of the United States.

A little more than one year after the incident, President Hunter became the president of LDS Church. He died in March 1995.

The events on the night of Feb. 7, 1993 at the Marriott Center made a lasting impression on the 17,000 students who attended that fireside, as well as a number of fledgling journalists at the Daily Universe.