Home Sports BYU What does BYU’s 2018 class reveal about the Cougars going forward?

What does BYU’s 2018 class reveal about the Cougars going forward? 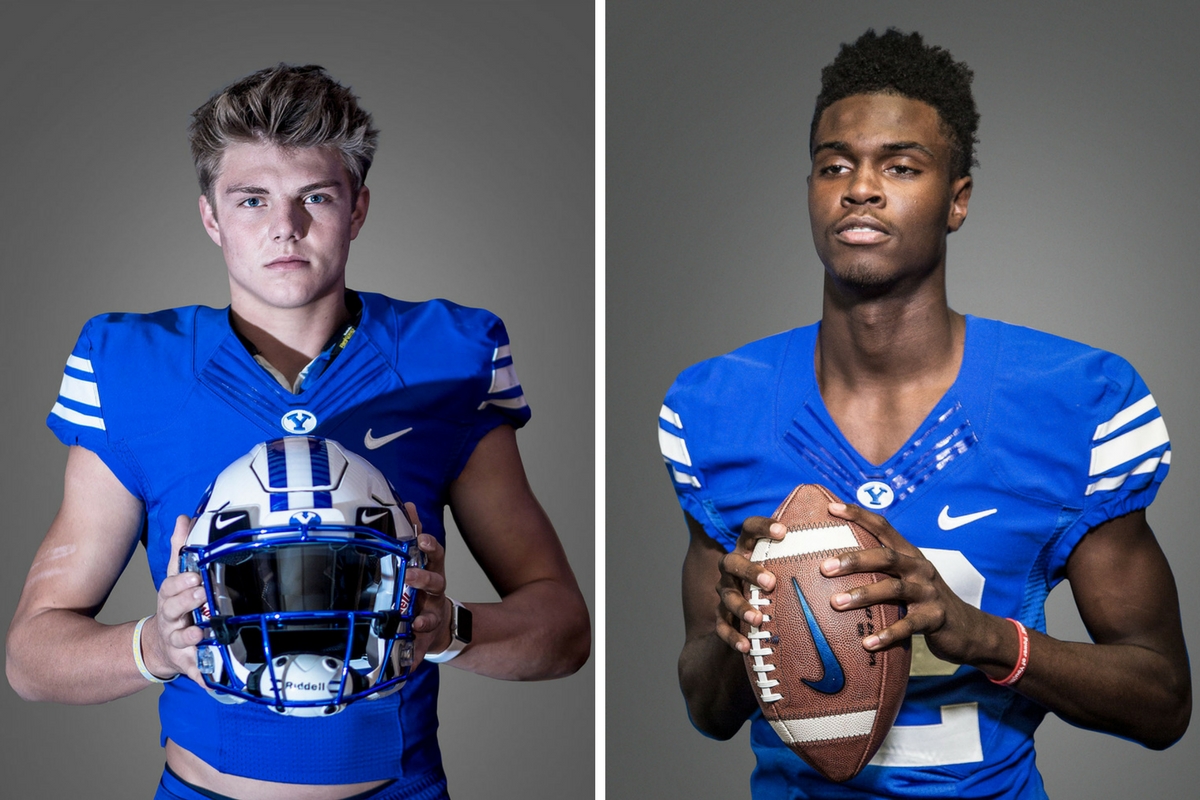 Zach Wilson and Stacy Conner are both 3-star recruits who will play quarterback position at BYU. (Photo by Brandon Despain/BYU Photo)

Few surprises emerged for BYU on National Signing Day. A large percentage of the team’s 2018 football signing class officially joined the Cougars in the early signing period in December.

This development ended up aiding head coach Kalani Sitake in a transition period. Coming off a 4–9 season, Sitake shook up his coaching staff during the late recruiting period. He brought in Jeff Grimes as a new offensive coordinator in December and then added five other assistants to round out the staff from December to February.

“They were already bought in from the beginning, so it was an easy transition for them just to sign,” Sitake said. “It was helpful for us. It took a little bit of the drama out of it, which is what I like.”

Collectively, BYU’s newest signees did not draw much attention nationally. 247Sports ranked the Cougars’ 2018 class 83rd among FBS teams while Rivals ranked it 90th overall. Player development will be a huge focus on this crop of mostly 2-star and 3-star recruits.

Here’s a closer look at what the future could hold for BYU going into this season and beyond:

The passing game has a chance to become more productive

A complete inability to move the ball caused Sitake to part ways with former offensive coordinator Ty Detmer after the 2017 season. Only one offensive assistant remains from last season after the Cougars finished 119th in total offense (325.2 yards per game) and 124th in scoring offense (17.1 points per game).

BYU brought in a pair of promising quarterbacks and both are talented enough to change that narrative in the near future, if either emerges as the starter during an expected quarterback battle in spring and fall camp.

Zach Wilson, a 3-star recruit out of Corner Canyon, racked up nearly 7,000 yards of total offense with the Chargers over his final two seasons. Stacy Conner, a 3-star recruit from Wylie High in Texas, has a strong arm and good pocket presence. Conner totaled 2,766 yards and 14 touchdowns over the last two years.

“Both of the quarterbacks we brought in are dual-threat guys that are athletic,” said Aaron Roderick, the new passing game coordinator and quarterbacks coach. “Guys who can run and throw. They’re both smart and great competitors.”

More big play receivers are on the roster

Whoever ends up being the BYU quarterback in 2018 will have a few more playmaking options to choose from in the receiving corps.

Four-star receiver Gunner Romney signed with the Cougars on Wednesday. Rivals ranked Romney as the no. 4 prospect in Arizona. Over three seasons at Chandler High in Arizona, he caught 198 passes for 3, 629 yards and 38 touchdowns.

“A big, strong receiver who I think is not only a talented player, but the right kind of kid,” Grimes said, describing Romney. “The guy is all business and is very serious about his training, has a plan to get here and compete right away. We are looking forward to seeing him do that.”

BYU is adding length, size and speed across the board

Size is the one thing that stands out immediately about the 2018 signing class for the Cougars. Not one player at any position is listed under 6 feet. BYU’s new offensive and defensive linemen range from 6-foot-5 to 6-foot-8. All five of these signees are at least 270 pounds. Similarly, all four new defensive backs are at least 6-foot-1.

Speed won’t be issue either for a healthy number of these newcomers. Brach Davis, a cornerback from Olympus, can run the 100 meter dash in 10.96 seconds. Malik Moore, a cornerback from Point Loma High in California, ran track as well. He also saw time as a punt and kick returner. Issac Matua, a linebacker from Kearns, also ran track.

“It all just goes down to the scheme you’re trying to play and what your identity is,” safeties coach Preston Hadley said. “For what we’re doing here, those bigger, longer, faster guys fit what we’re trying to accomplish. It goes back to the philosophy that you can’t coach or teach size and speed. There’s a reason they have weight classes in boxing. Those are things you can’t teach.”

The Cougars are casting a wider recruiting net

Star rankings dipped significantly from year one to year two under Sitake. One positive development, however, is the creation of more recruiting pipelines outside of Utah and even outside the United States.

BYU brought in 22 recruits from nine states and two from other nations. Eleven members of the 2018 class came from the Beehive State. Remaining signees hailed from Arkansas, Minnesota, South Carolina, Nevada, Arizona, Texas, Australia and Nigeria.

Chinonso Opara, a 6-foot-8 lineman from Nigeria who played at Juan Diego, is a raw prospect. He also has tons of athletic upside. Opara was a 3-star recruit who also ran track and played basketball, cricket and soccer before settling on football.

The Cougars are already excited thinking about what Jones could accomplish on special teams with the attributes he already possesses.

“He’ll be one of the better athletes on our team,” assistant head coach Ed Lamb said. “One of the biggest, fastest, strongest guys on our team.”