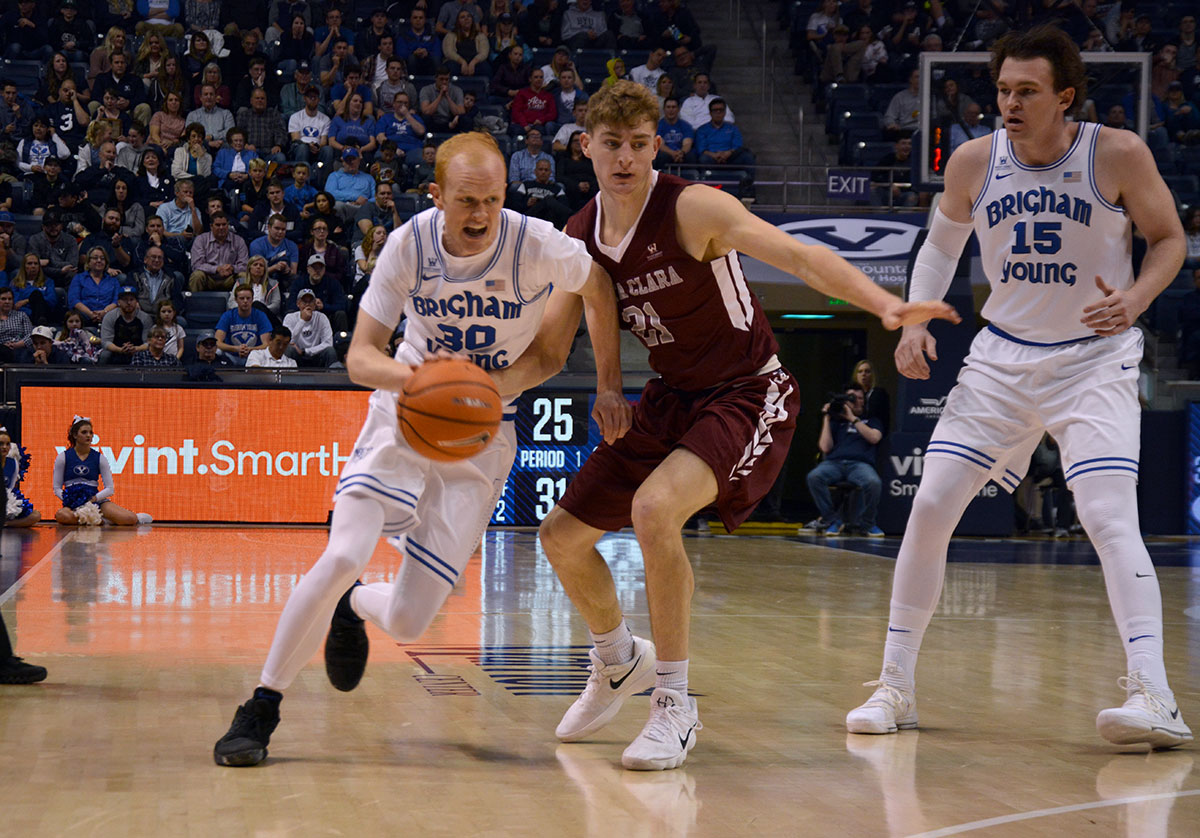 BYU basketball used every member of its team to beat Santa Clara 80–58 in the Marriott Center Thursday night.

After struggling to get points from the bench last week, nine of BYU’s players scored for the Cougars. Four Cougars scored in double digits: Yoeli Childs (20), TJ Haws (14), Elijah Bryant (14),  and Dalton Nixon (12).

“I thought there was a really good feel with our team tonight,” said BYU coach Dave Rose … “The guys shared the ball really well and connected well on defense.”

BYU (19–7, 8–5 WCC) came into the game hitting shots and finding each other on the court. Rose said the successful backdoor offense can be attributed to how Santa Clara defended BYU in its previous meeting by using two defenders on a player. In practice, the Cougars prepared to find the open player.

“It was that second and third ball tonight that was really impressive,” Rose said.

At first, BYU continued to struggle from behind the arc for the third game in a row, only 22.2 percent from the 3-point line in the first half. However, the Cougars broke the two game, 3-point curse in the second half. BYU went 4-for-6 from behind the arc in the second half, bringing the 3-point game percentage to 40 percent. And those made 3-pointers came from four different players. A welcome change after shooting just 15 percent from the 3-point line against Gonzaga on Saturday.

“For all of us, I think every guy was just so antsy to play a game, to get that bad taste out of our mouths after last week,” Nixon said. “That’s really what we focused on. Every player on the team has been itching to play again.”

BYU overcame another flaw in last week’s loss to Gonzaga — the bench contributed points. After going scoreless in the loss, four Cougars scored off of the bench in Thursday night’s game.

“All of the guys on the team, on the bench just gave it their all today,” Nixon said. “It’s just a really good feel overall tonight.”

Rose just hopes his team can find a way to get the bench contributing when the team leaves the Marriott Center.

“I think that’s expected from young guys at home,” Rose said. “What we need to do is be able to get that same help when we leave the Marriott Center.”

Overall, Thursday night’s game was a full team effort both offensively and defensively.

“We just really focused on being together on both sides of the ball,” Nixon said. “That came together for us on the offensive end. We were able to share the ball early on and make the extra pass and trust each other offensively.”

“I just take defense personal,” Hardnett said. “That’s something that I really lock into. I’ve got the mindset that I don’t want another player to outshine me.”

BYU next plays against San Francisco at home on Saturday, Feb. 10 at 2 p.m. MST.

Utah Fertility Center: Professionals caring for those struggling with infertility Next post