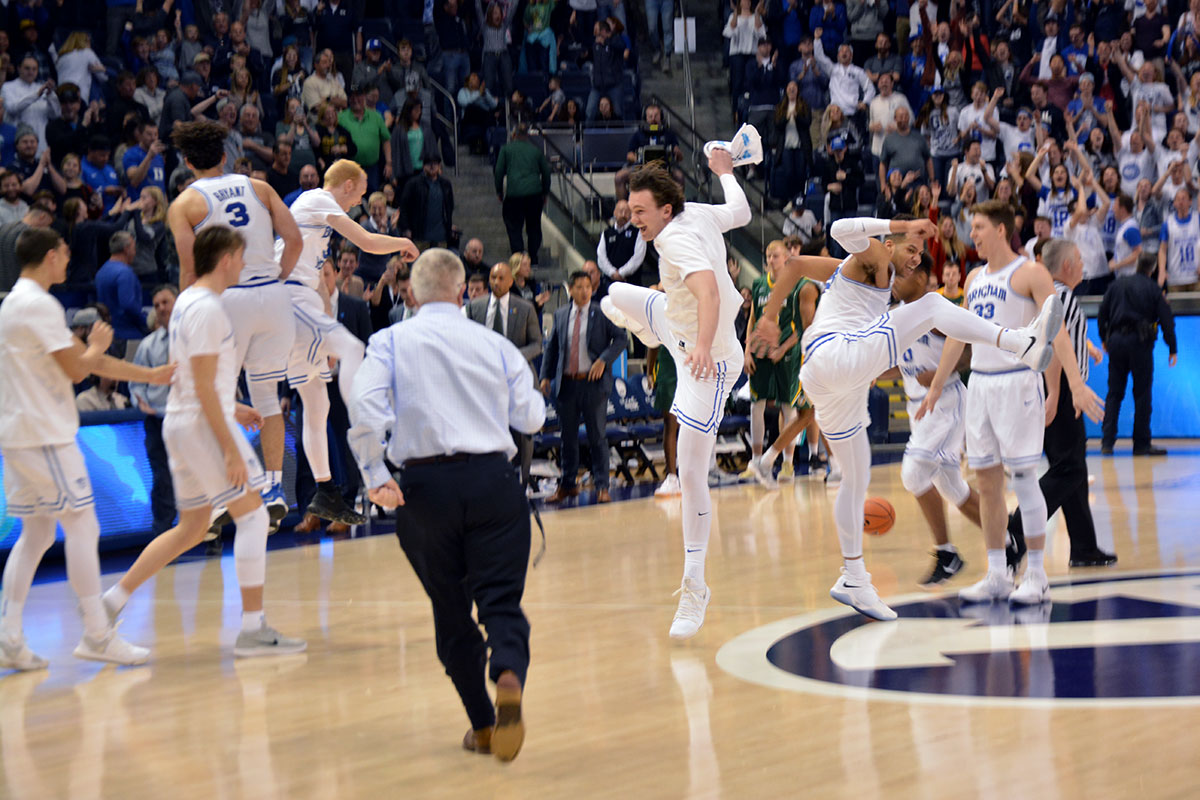 With only a few minutes left in the game, BYU fans started leaving the Marriott Center when it looked like the Cougars would lose to the San Francisco Dons. For those fans, BYU coach Dave Rose has little sympathy.

“Too bad for them. Maybe next time we’ll get the camera and make them wear a yellow hat,” Rose joked.

Those fans missed out on a 75–73 overtime BYU win against USF on Saturday afternoon.

“We caught a break at the end of regulation, so our mentality was, ‘we’re going to win this game in overtime,’ said BYU guard TJ Haws. “I thought we brought it. We got down a bit a little bit early, but our resilience is awesome and I thought we fought hard tonight. And it just showed a lot about what this team is.”

“We did a good job of coming back to send it to overtime, but we made too many mistakes and didn’t rebound when we needed to,” BYU head coach Jeff Judkins said. “You can’t give away opportunities to the home team.”

The back-and-forth game was tied 10 different times and remained tied for 7:37 minutes of play.

With the loss, the Cougars fall to 14–11 overall and 9–5 in the West Coast Conference.

The Cougars return home for a game against Pepperdine on Thursday, Feb. 15 at 6 p.m. MST.

UVU men’s basketball team couldn’t find a way to stop the hot-handed University of Missouri Kansas City in its 77–70 loss on Saturday night.

UVU ends its road trip run and returns home to take on Western Athletic Conference leader New Mexico State on Thursday, Feb. 15 at 7 p.m. The game will be broadcast on UVU TV and the WAC Digital Network.

Don’t leave the back door open🚪

UVU women’s basketball ended a four-game losing streak with a 68–65 win over University of Missouri Kansas City on Saturday.

“Those losses are now in the past,” said Utah Valley head coach Cathy Nixon. “I’m really proud of the way our team stepped up tonight. It could rattle you when you don’t feel like you played well and stepped up to the challenge, so I’m just really proud of how the girls came in and competed. UMKC’s not a bad team and they’ve won some big games, but I loved the balanced effort tonight.”

In the home win, UVU senior Taylor Christensen reached 1,000 career points. She tied to lead the Wolverines for the night with Mariah Seals, each scoring 14 points. A total of five Wolverines scored in double figures including Jordan Holland (13 points), Britta Spencer (12 points) and Gabrielle Leos (10 points).

“This was an important win for us as we start conference play,” BYU head coach Shawn Olmstead said. “We stayed composed when USC went on some runs, and we were able to close out some close sets. I liked the team effort we showed tonight.”

BYU senior Brenden Sander had a career night; he led the team with a career-high 23 kills on a .372 clip and added a career-high five service aces. Freshman opposite hitter Gabi Garcia Fernandez contributed 18 kills on a .441 clip and six digs. BYU setter Leo Durkin had a season-high 54 assists.

The Cougars continue playing on the road on Thursday, Feb. 15 against No. 10 Grand Canyon. This will be the first time in program history the Cougars have played the Antelopes.