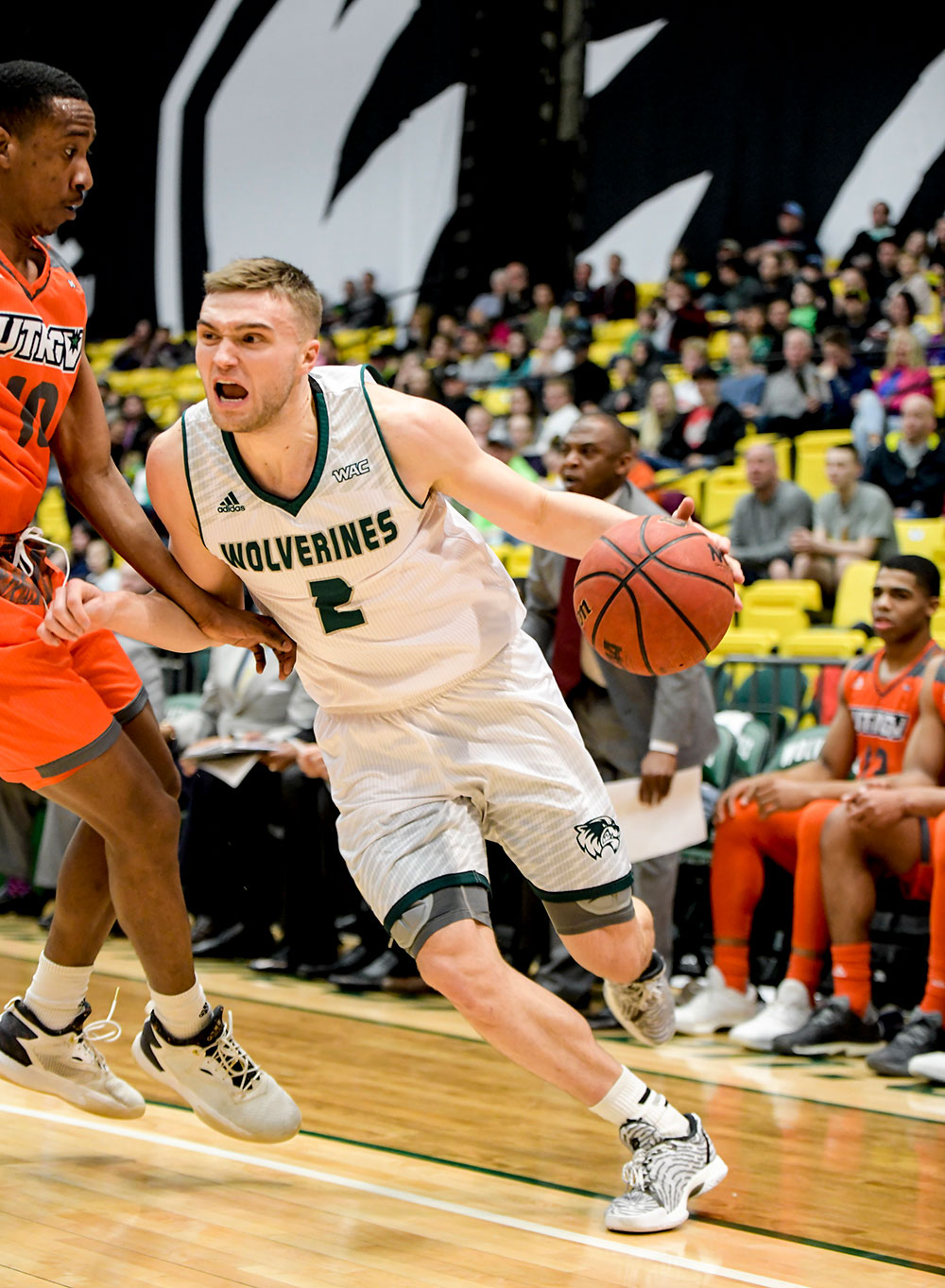 UVU sophomore Jake Toolson led the Wolverines in scoring with 16 points and eight rebounds against UTRGV. (Photo by UVU Photo)

“I’m really proud of my guys,” said UVU coach Mark Pope. “This UTRGV team is a really tough team. We knew they would come in here and battle. We were carrying over some fatigue from Thursday night’s big game. We came in and did what we had to do. Our guys were really sharing the ball. We had 22 assists on 28 made baskets. That’s really good.”

This season UVU has maintained a 14–1 home record while going 5–7 on the road.

With just two weeks remaining in conference play, UVU is tied for second play in the Western Athletic Conference with a 19–8 overall record and 8–3 WAC record.

UVU women’s basketball battled back from a nine-point second half deficit to send the game into overtime but eventually lost 71–64 to UTRGV.

“We had opportunities,” said Utah Valley coach Cathy Nixon. “That’s what you really hope for is to give yourself a chance, especially on the road against a team that has some momentum going for itself feeling confident off an overtime win against Seattle U. I think this came down to [UTRGV] grabbing 21 offensive rebounds and us missing 10 of our free throw attempts. If we cut both of those in half, I think the game would’ve swung the other way, but I’m proud of the way the girls fought tonight.”

The Wolverines (10–16, 4–7 WAC) return home for its final pair of home games of the regular season starting on Thursday versus WAC frontrunner CSU Bakersfield at 11 a.m. in Lockhart Arena.

After playing back-to-back overtime games and coming out with a win, BYU men’s basketball team couldn’t find a rhythm against San Diego. The Cougars lost 75–62 to the Toreros on Saturday afternoon.

“We got ourselves in foul trouble too early, which made it difficult to get any kind of rhythm,” BYU head coach Dave Rose said. “I thought there were some things that we can build on.”

Both BYU sophomores Yoeli Childs and Jahshire Hardnett fouled out of the game.

BYU has one last road game during conference play. On Thursday, the Cougars travel to Portland. The 9 p.m. MST game will be broadcast on ESPNU.

BYU women’s basketball team battled until the end, but was unable to complete a comeback in its 66–60 loss to San Diego in the Marriott Center on Saturday.

“Today we did not play like we were capable of playing,” said BYU coach Jeff Judkins. “It seemed like we were going uphill the whole game. We had some opportunities to win, but we didn’t make plays when we had to make them. Hopefully we’ll be able to bounce back Thursday and play well Saturday to go into the tournament with confidence.”

With just 1:03 minutes left in the game, BYU freshman Sara Hamson blocked a San Diego shot attempt and sophomore Brenna Chase scored a 3-point shot at the other end of the court to get the Cougars within one point of the Toreros. Then BYU had the chance to take the lead with only 30 seconds left in the game, but a missed Chase 3-pointer forced the Cougars to foul. San Diego made both of its free throws and BYU missed its remaining shot attempts.

For senior night, BYU will host Portland in the final home game of the season at 7 p.m. on Thursday, Feb. 22.

“I’m happy with how the guys played today,” said BYU head coach Shawn Olmstead. “Our block was particularly effective, and I thought we competed well as a team.”

The Cougars continue on the road for their next match against Stanford on Wednesday, Feb. 21, at 8 p.m. MST. A live stream and live stats for the match will be available on the BYU men’s volleyball schedule page.

What 5 U.S. presidents have said about the LDS Church Previous post

Utah-Tube: A few of the greatest 'Greatest Showman' covers by local artists Next post