BYU basketball is ‘due to have some big nights’ 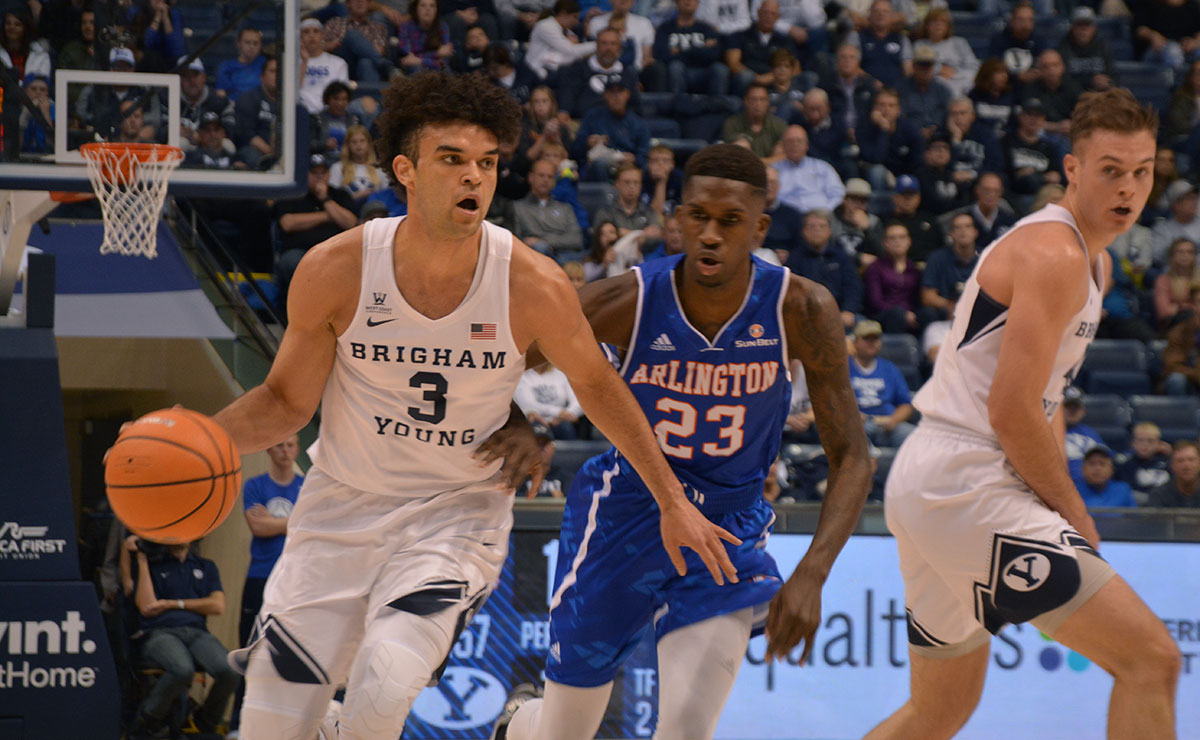 BYU junior Elijah Bryant drives to the basket in a game against UT Arlington. Bryant is the Cougars leading 3-point shooter. (Photo by Rebecca Lane)

BYU basketball is a good 3-point shooting team — at least that’s what the scouting report would have told teams at the beginning of the season. But currently the stats aren’t backing up that statement.

The 3-point shot, which has been BYU guards’ best friend throughout the Rose era, has sometimes proven to be more of a mortal enemy in February. BYU is plagued by poor 3-point shooting. Last week, BYU basketball hit a new low, shooting 13.6 percent of 3-point shots and making only three out of 22 3-point attempts.

“The majority of them are good shots,” said BYU coach Dave Rose. “Sometimes you have a really easy fix and that’s just getting them to take better shots. You watch film, you break it down and you show them opportunities. But I think we’re making the right plays most of the time. It will come. Every team experiences it. Sometimes it lasts longer than others. Hopefully we can break out of this thing and get rolling.”

Since the beginning of conference play, the Cougars have scored an average of 34.2 percent from 3-point line. And the Cougars are desperate to break this peculiar curse of hit-or-miss and return to that proficiency.

“Everyone on our team is a great shooter,” said BYU sophomore Yoeli Childs after practice on Tuesday. “The guys are out there working on their 3-point shooting after practice. I can’t pinpoint one thing in this little stretch where we’ve been struggling from the 3-point line, but just looking at it from my perspective, we’re due to have some big nights, and there is no better time than now to start shooting the ball really well.”

Childs — who says he feels better after twisting his knee in a game against Pepperdine last week — says the team continues to trust each other to get the job done, which means figuring out how to win games one game at a time.

“The key is staying together. The key is focusing on what we need to do as a team and not what you want to do individually,” Childs said. … “The most important thing is winning games. I think if we can just focus on getting a win no matter what, if we can just focus on playing defense together, passing the ball together on offense and doing everything together, we’ll be fine.”

And BYU (21-8, 10-6 WCC) will need to stay together as it finishes out the last two games of the conference play against Portland and No. 6 Gonzaga.

It has been nearly two months since BYU last faced Portland (10-19, 4-12 WCC). And this second time around Rose says it will feel like BYU is playing a different team.

When Portland played BYU on Dec. 28, 2017, the Cougars toppled the Pilots 69–45. That remains the Pilots lowest scoring game of the season. Rose says the team can’t expect that performance again because the Pilots always play well in their home gym.

“I think [the Pilots] are playing their very best right now,” Rose said. “Hopefully we can get back to playing our very best here pretty quick.”

BYU travels to Portland to take on the Pilots on Thursday, Feb. 22 at 9 p.m. MST. The game will be broadcast on ESPNU.