Gonzaga’s offensive prowess too much for BYU basketball 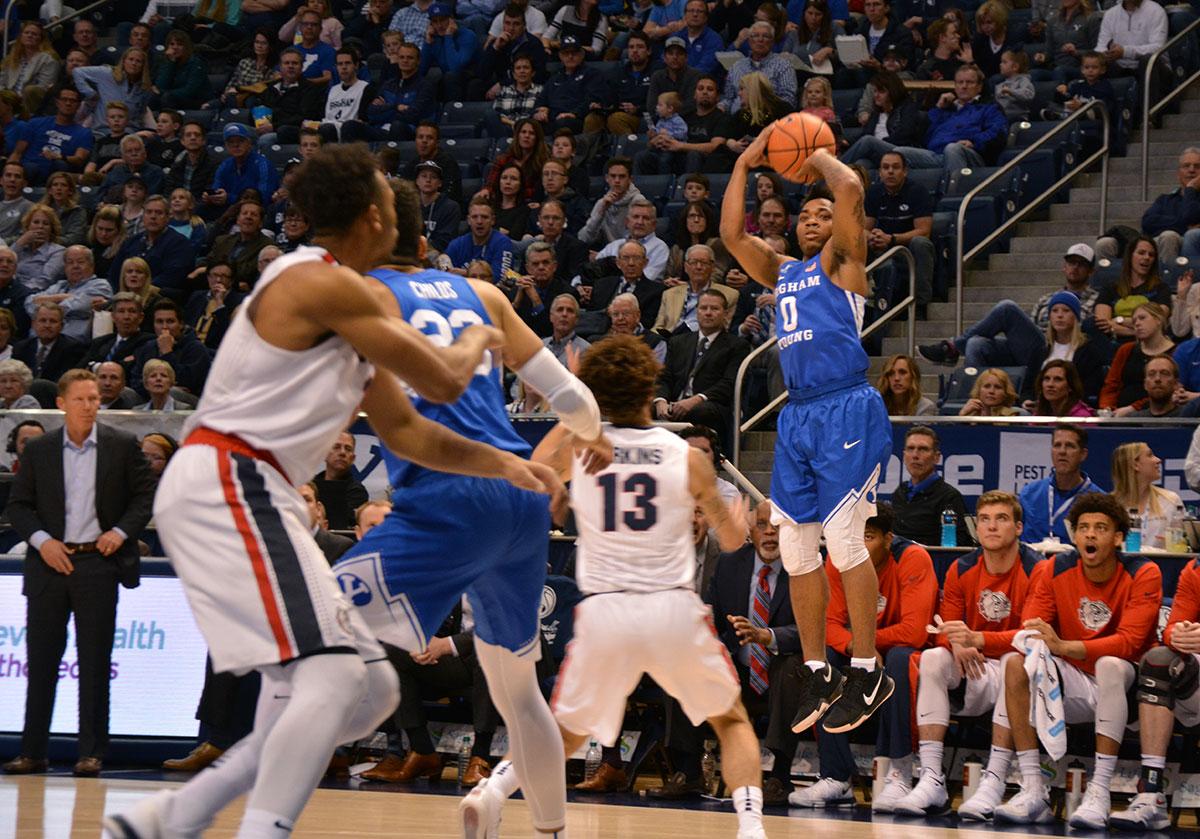 BYU sophomore Jahshire Hardnett scored 10 of his 11 points in the first half against Gonzaga. The Cougars lost 79–65 to the Bulldogs in the Marriott Center on Saturday night to close out the regular season. (Photo by Rebecca Lane/UV360)

“We competed with them in stretches, but they had several guys step up and make plays and that’s what championship teams do,” said BYU assistant head coach Tim LaComb, who stepped in for BYU head coach Dave Rose, who went home sick with the flu. “We were happy with some moments. In the first half it could’ve gotten away from us, but our guys really showed some character and got that thing back. We just have to move forward and get ready for next week and the tournament.”

On the offensive end, No. 6 Gonzaga was unstoppable.

“They hit shots and we couldn’t,” BYU junior guard Elijah Bryant said. “It’s pretty much plain and simple. We had open shots, they just weren’t going down.”

The trick — Gonzaga has an evenly spread offensive team. Led by forward Johnathon Williams, Gonzaga had six players score in double figures ranging from 10 to 16 points. And BYU didn’t know how to stop a team that had five offensive threats on the floor at once.

“[Gonzaga has] great players,” LaComb said. “To their credit, they all understand that you are going to get a turn this time. They just tend to make the right play. That’s really impressive. That many guys playing together — that’s what you hope for.”

As the Bulldogs sunk field goal after field goal at an efficient 55.4 percent, BYU watched the ball bounce around off the rim of its basket. The Cougars shot 38.6 percent from the field. But the whole game wasn’t that way.

“We talked about it, it was kind of crazy,” Lacomb said. “Sometimes you really look forward to the half, sometimes it’s tough and you really wish you could keep playing. We came out tentative (in the second half), they executed well and they made some tough plays.”

In the second half, Gonzaga pulled away leading by as much as  21 points. The closest BYU came to closing the gap was 14 points, which was at the conclusion of the game. With 2:26 left in the game, BYU subbed out its core players, which left players on the floor who, up to that point in the game, had only scored a combined total of three points. The group combined for six more points before the end of the game.

BYU was led in scoring by sophomore Yoeli Childs who had 19 points and eight rebounds. Bryant contributed 16 points and sophomore Jahshire Hardnette, who got the offense going in the first half, scored 11 points.

BYU (11–7, 22–9) heads to Las Vegas next weekend for the WCC Tournament. The quarterfinal round begins on Saturday, March 2.

“Ready or not, right? Here we go,” Lacomb said. “It’s fun time of year, for sure. You work all year long to put yourself in a position for this. We’ll see if we can make some noise. We’re looking forward to the postseason.”