‘The Greatest Showman’ songwriters feel like Justin Bieber in Utah 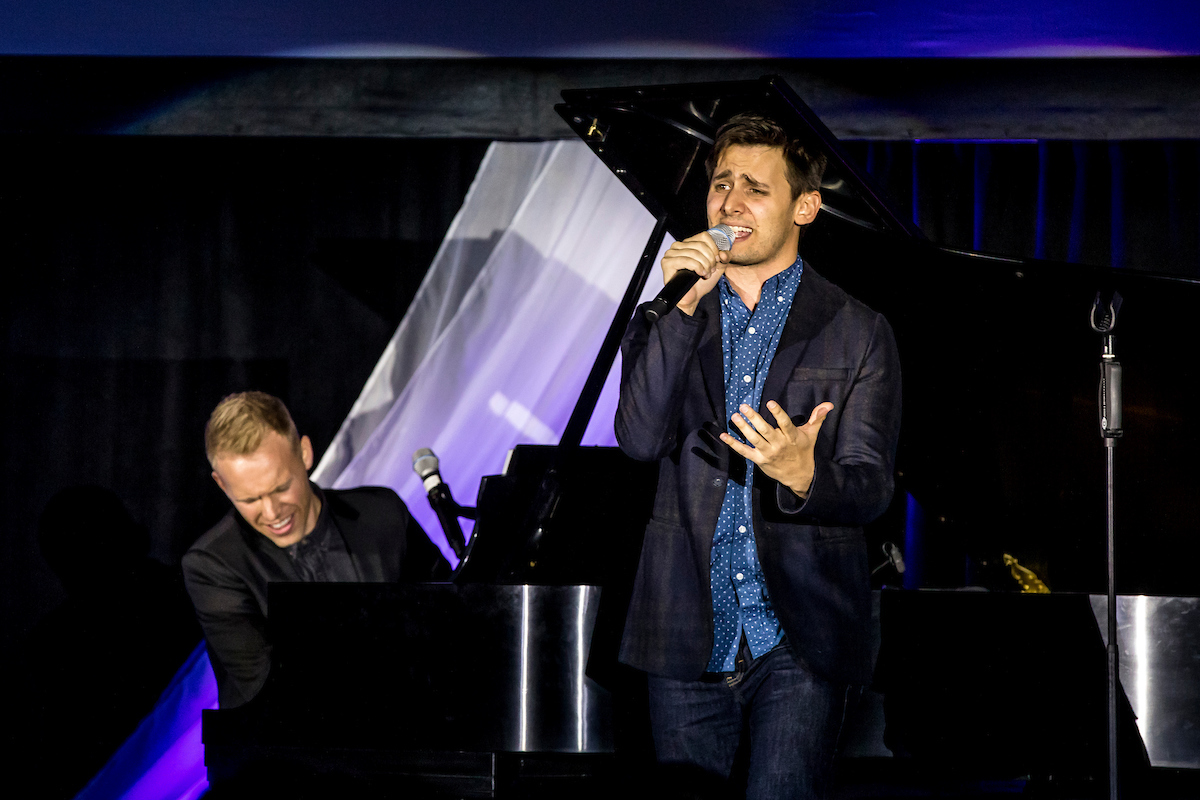 Benj Pasek and Justin Paul, known together as Pasek and Paul, are an American songwriting duo and composing team for musical theater, films, and television are photographed during the speaker series main event in the Rebecca D. Lockhart Arena on the Utah Valley University campus in Orem, Utah on Monday, Feb. 26, 2018. (Jay Drowns / UVU Marketing)

“A lot of people ask, ‘Is this your first time in Utah?’ And we’re like, ‘no, we’re obsessed with Utah. We’ve been here before,” Pasek told a filled Rebecca Lockhart Arena at UVU Monday night.

Before Pasek and Paul received awards for “La La Land,” “Dear Evan Hansen” and “The Greatest Showman,” the duo traveled to Orem, Utah in 2011 to participate in the Utah Theatre Association.

“We developed a real affinity for this place because there is so much enthusiasm for the kind of work that we do,” Pasek said in a press conference Monday morning. “I remember when we took the stage seven years ago we didn’t know what to expect and we felt like we were Justin Bieber with the type of energy we were getting back from folks here, so we were really excited to come back.”

So when the now well-known songwriters received an invitation to return to Utah Valley University as presenters at the university’s Roots of Knowledge speakers series, they decided to reclaim their Justin Bieber-esque status. Plus, the timing lined up perfectly because they were already scheduled to fly to Los Angeles for the Oscars.

“It’s going to be a really wonderfully launch for us this next week to feel the kind of energy and love from the people here,” Paul said

Pasek and Paul are nominated in the Oscar’s Best Original Song category for “This Is Me” from “The Greatest Showman.” The songwriting team already won one award for Best Original Song at the Golden Globes in January for the movie anthem. Now the two are on their way to the ‘”City of Stars” to (fingers crossed) pick up another award.

“If things don’t work out on Sunday, we’ll just hold onto the love that we feel tonight,” Paul joked.

After meeting with the press Monday morning, Pasek and Paul ventured onto UVU’s campus to host a two-hour workshop with UVU’s musical theater students. Then they continued sharing their experience at the Roots of Knowledge speaker series, which was moved from the Fulton Library to the Rebecca Lockhart Arena to accommodate the overwhelming request for tickets. Throughout the Monday night performance, Pasek and Paul interspersed performing songs, sharing stories and exchanging laughs with the audience.

“This is not your typical lecture or speaker series,” Paul said. “We requested a piano. And they told us there would be spotlights, which is cool. We’re excited to be here with you guys and tell some stories and sing some songs.”

During the show, the duo sang songs from their work including “Waving Through a Window” from the Tony Award-winning show, “Dear Evan Hansen;” “This Is Me” and “Rewrite The Stars” from “The Greatest Showman;” “Floatin’ Along” from “James and the Giant Peach Musical;” and  “Some Kinda Time” from “Dogfight.”

But Pasek and Paul weren’t just singing their award-winning songs — they were laughing and interacting with the audience. Referencing UVU President Matthew Holland’s introduction of the duo, Pasek and Paul told the audience to imagine them as the actors who have performed their music, namely Ryan Gosling and Hugh Jackman.

“Everybody close your eyes and imagine that we are incredibly masculine,” Pasek said, prior to singing the marine’s song, “Some Kinda Time,” from their musical “Dogfight.”

Attendees hung on every word and every note, clapping and stamping — and sometimes singing — along to the music. It’s that energy and enthusiasm that has given Utah a special place in Pasek and Paul’s hearts.

“We’re obsessed with the fact that you’re obsessed, and the obsession is just a circle around and around,” Pasek said.

From the performance to the press conference, here is more of Pasek and Paul’s story.

The making of Paul and Pasek

Pasek and Paul first met at the University of Michigan where they were both studying musical theater to become actors.

“A lot of what brought us together before we started writing was insecurity at not being great at things,” Paul said. “We were the worst dancers in our musical theater class, so there was some solace in the ‘misery loves company’ mentality.”

After being cast as the “man with camera” and “coroner/backup dancer” for the university’s production of “City of Angels,” the frustrated friends decided they were going to write their own show. They had other students from the university join them.

“I think being in that sort of petri dish of college is an amazing moment to keep trying things and to be inspired by your peers and your friends who are doing their own thing and you find your own thing,” Paul said.

Following college, the two moved to New York City to pursue a career in song writing.

“[We] said yes to a lot of things and pursued a lot of opportunities and kept working,” Paul said. “It’s been 14 years since that time. It was definitely not over night. In certain ways, things have happened faster than we thought they would, but it wasn’t like we got lucky one day. We have gotten very lucky over a series of a lot of projects and events, but it hasn’t been a couple of years since we began.”

During their performance, Pasek and Paul revealed that Salt Lake City was a test location for “The Greatest Showman” during the post-production of the film. Following the test showing, the producers called to tell the duo that the movie had “scored off the charts” with the audience in the testing. When Pasek and Paul inquired after where the producers had tested the movie, they weren’t shocked to hear it was in Utah.

“Here’s what you need to know about Salt Lake City,” Paul said. “They love musicals.”

When Pasek and Paul were brought in on the project four years ago, actor Hugh Jackman had already been working on “The Greatest Showman” with a team for three years. Pasek called it Jackman’s “passion project.” Knowing they were writing for a high-caliber actor like Jackman helped the songwriters in the process of creating songs for the musical. But they also sought inspiration for songs outside of the already cast roles in the movie.

One person who inspired them was Southern Utah University alumna Keala Settle, who was part of the oddity chorus leading up to the screening workshop.

“As we were writing this, we never imagined that we would get so lucky that we would be able to bring her along, that she’d get to be in the movie, because it was just our Broadway friend Keala,” Pasek said. “We didn’t even know if our songs would make it in the film; we certainly didn’t know if she’d get to be in the film as well. At the time Kaela was joining us, it was a job. She was singing the second alto line. She was one of 15 different people who were oddities. It wasn’t a big role by any means.”

Then Settle was asked to sing “This Is Me” at the workshop — a moment that Paul described as emotional. One of the last completed songs before the workshop, “This Is Me” was intended as the anthem for the movie. At the workshop, Settle was hesitant to step out from behind the music stand, but, like her character, she embraced her role as the song progressed in that session. Since the movie has hit theaters, that workshop moment has been published on YouTube.

“At the end of the workshop, the film studio came up to her and said, ‘You’re amazing. I have no idea who you are, but you’re going to be in this movie,'” Paul said. “‘It’s going to be your first major motion picture.’ It was an amazing journey to go from being in the chorus, us thinking of her when we wrote that song because she was that character, to her delivering the song to her performing that song next week on the Oscars.”

On Sunday, Settle, who plays the Bearded Lady in the movie, will perform “This Is Me” at the 90th Academy Awards at the Dolby Theatre in Hollywood, California.

Bill would ban abortions based on Down syndrome diagnosis Previous post