‘The Greatest Showman’ songwriters feel like Justin Bieber in Utah

For most of their projects, companies have either asked Pasek and Paul to write songs for their storylines or the two have pitched themselves to producers in hopes of having the opportunity to write for existing stories. But “Dear Evan Hansen” was the duo’s brain baby.

“It has been really rewarding to see, especially for young people, a show they can relate to and covers topics that are a little harder to deal with and cuts to the core of things they are going through,” Paul said. “For us, we wrote the show and put it out there.”

While many shows on Broadway don’t share everyday, relatable stories, Pasek and Paul set out to share a story the audience would recognize in their own lives.

“I think people have appreciated being able to watch what feels like their life on stage,” Paul said. “That was our goal. There are plenty of shows we write that aren’t anything to do with what people are going through right now. We wanted to write something that felt like people could come and say, ‘That’s sort of what my family feels like. My family is sort of messed up and broken, but we love each other and we’re trying.’”

With three major successes over the past couple of years — “The Greatest Showman,” “Dear Evan Hansen” and “La La Land” — the work flow isn’t slowing down any time soon. Pasek and Paul are working on “Medusa” for Sony Pictures Animation as well as two live-adaptation movies for Disney: “Aladdin” and “Snow White.”

“We were really influenced by the big Disney renaissance of the late ’80s, early ’90s, the Alan Menken-Howard Ashman collaborations,” Pasek said. “The first movie I ever saw in the theater was ‘The Little Mermaid.’ Musical storytelling is so foundational to me and so many people in our generation. We grew up having story and song work in tandem to progress narrative.”

Pasek and Paul have already worked with Menken as lyricists on the upcoming live action “Aladdin,” which will hit theaters in May 2019.

“Just being in the room with your hero who you hope is everything you want him to be and more, and he was everything we wanted him to be and more,” Pasek said. “It was basically us just asking him life lessons and questions about the world and advice about writing. Then we actually got to write with one of our heroes and got to dive into a world that we grew up loving. ‘Aladdin’ is really in our DNA and influenced us so much. So we’re really excited about that film that comes out next spring or summer. And getting to write songs for Aladdin and Jasmine — what bigger thrill could you have?”

Now the duo is working on music for the live action “Snow White.”

“It’s a live action adaptation with some updates,” Paul said. “There will be some of the songs that we all love. We won’t ruin it for people, we promise. Or at least, we’re not intending to ruin it. We can’t speak for it. But preserving and honoring what’s so beautiful about that classic, animated film but then bringing a new dimension to it being live action and new songs that we’re working on now, I’m really excited about that now.”

That’s what’s on the list in the immediate future. In the end, the songwriting team wants to return to their roots in musical theater.

“In five years from now, I hope we’ll be back on Broadway,” Paul said. “Honestly, we feel like there are moments as far as ebbs and flows of people’s willingness to embrace musicals on stage, on film, on TV. Right now it feels like a moment where we are embracing musicals with shows.”

And the team is brainstorming ideas for another original musical to invest their time into writing.

“‘Dear Evan Hansen’ was a story that came directly from us and that we started,” Pasek said. “We reserved the seeds of that project so it really felt like a very fulfilling thing to do. I think now we’re really searching for what the next thing … that moves our souls and that is something we really want to invest the next five-seven years in telling. I think we’re really on the hunt right now. We have a couple ideas we’re playing around with, but again we’re accessing. It’s a really major investment to pour that much time in, so we’re trying to think of what’s a thing we’re really passionate about that we want to dive into.” 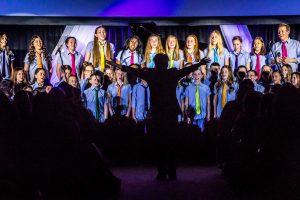 The One Voice Children’s Choir performs at the UVU Roots of Knowledge speakers series with Benj Pasek and Justin Paul. (Photo by Jay Drowns/UVU Marketing)

Method to working on multiple projects at once

With multiple projects overlapping, Pasek and Paul have had to learn to prioritize.

“It’s been a hodge podge up to this point,” Paul said. “We’re trying to change that. We’re trying to have a little bit more of a focused effort on things. The last few years have been a little bit of a game of whack-a-mole in terms of putting out fires like ‘get that deadline.’ But it’s helpful in ways, because having deadlines as a writer is the only thing that gets you to the finish line because you can wallow or keep caught in the turmoil of rewriting and saying it’s not good enough. When you have a deadline, you have to get it to a certain place and then hand it over. Then your collaborators can help get it to the finish line.”

While it is difficult having multiple deadlines at a time, Pasek says he appreciates the variety having different projects provides the songwriters.

“In general, it is good to have multiple things going on at the same time so you can jump from one to the other,” Pasek said. “And if you get stuck or you hit a wall with one, you’re like, ‘OK, let’s put this project to the side. I’m going to jump to this other one.’ Even something like ‘The Greatest Showman’ developing at the same time as ‘Dear Evan Hansen,’ any time that we’d be stuck or be in a dark place with ‘Dear Evan Hansen’ we got to write for Hugh Jackman to sing and dance. It lifted us out of a place of getting stuck and gave us a new vista.”

Editing isn’t just for the essay writer. Pasek and Paul said almost every song in “The Greatest Showman” has another song that existed before the final cut. In fact, the song “The Greatest Show” as it appears in the movie is the sixth draft of that song.

“There’s this meme I saw online that there’s this iceberg and it’s just the top of the iceberg and then below the surface of the water you see leagues and leagues under the sea of what the ice is,” Pasek said. “And the top above the ocean is what people see of your work and below the ocean is all the effort you put in. There’s such a disparity of what you see and what it really takes.

… “Sometimes you think you get it right the first time and your collaborators disagree, and you’re like, ‘OK, well, if you think it’s bad and I think it’s good, then let’s try again.’ Sometimes it is the opposite way. I think projects become good because you continue to chip away at them and you continue to rewrite them. The more you do that the better chance you have at creating something that will be good. … It really can take a long time. The more time investment you put into things the better they become.”

When answers aren’t coming, Paul says he is grateful all projects involve some form of collaboration.

“I think there’s always a moment in pretty much every project, at least that we’ve worked on, where it seems like something’s not going to work,” Paul said. “Maybe that’s just the way we are, but there definitely always reaches a dark night of the soul — more of a moment — where there’s probably not a way out of the corner we’ve painted ourselves into, but that’s why collaboration is key. That’s why we love to have musicals because you are working in a group of first three, four, seven, going to 100 people all making it happen because it’s amazing what people can pull each other out of when they’re working as a team.”

Check back on UtahValley360.com and Facebook later this week for video footage of the show.

Bill would ban abortions based on Down syndrome diagnosis Previous post