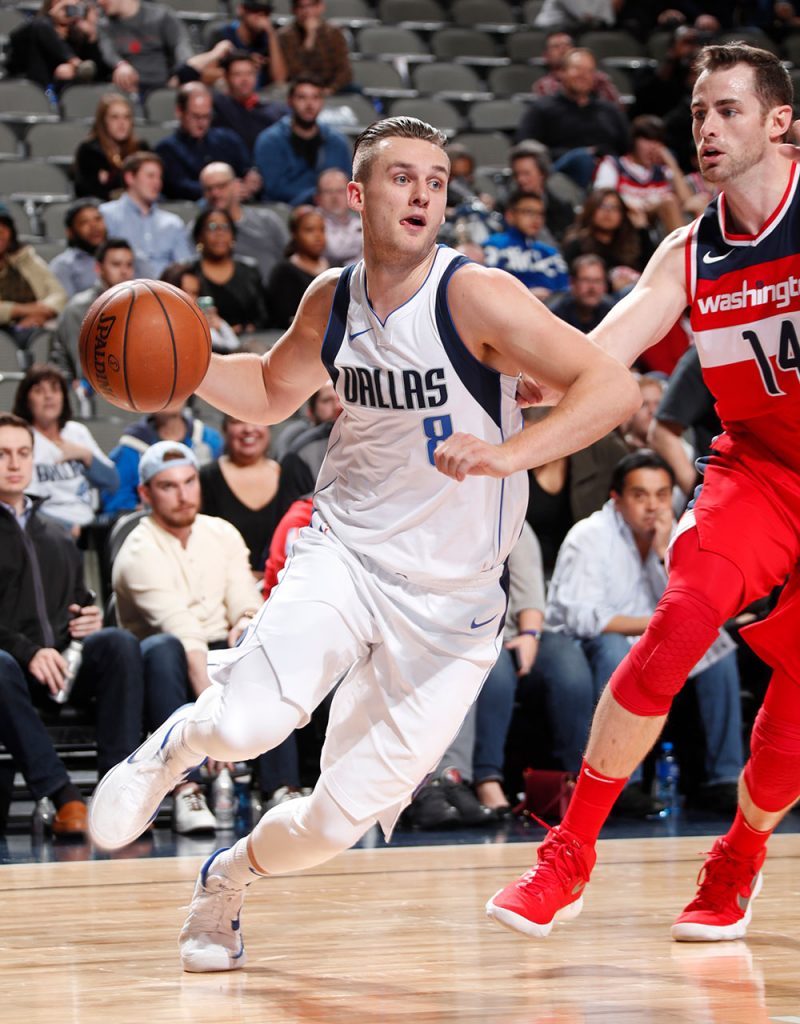 Playing at Vivint Smart Home Arena is not a new experience for Kyle Collinsworth. Still, this latest game carried a much different feeling for him than the previous ones.

Collinsworth played in the arena many times during his college career at BYU. This time around, when he checked in late in the first quarter, he sported a different uniform. The rookie guard had returned to play in his home state for the first time with the Dallas Mavericks.

Collinsworth ultimately only played two minutes and finished with zero points, one rebound and one turnover in his team’s 97–90 loss to the Utah Jazz on Saturday. What showed up in the box score didn’t matter as much as just simply getting an opportunity to prove himself in the NBA.

“It’s been a roller coaster, but I think the biggest thing I’ve been able to do is believe,” Collinsworth said. “Believe when things were good. Believe when things were bad. Never lost my belief. Never lost my goal. I just kept working and kept believing. I stayed consistent with my routine, with all the little things that I do that I believe give me an edge to be here, so I just kept at it.”

The former BYU and Provo High guard did not take a glamorous path to the NBA.

His roller coaster ride began when Collinsworth went undrafted after graduating in 2016. He joined the Mavericks in the NBA Summer League and signed a contract with them. Collinsworth played in five preseason games for Dallas but the Mavericks ended up waiving him before the regular season.

Collinsworth then spent the 2016-17 season with the Texas Legends, the NBA G-League affiliate of the Mavericks.

So far, Collinsworth has appeared in 17 games with the Mavericks and is averaging 2.6 points, 2.4 rebounds and 1.5 assists in 11.9 minutes per game.

“He’s earned the shot,” Mavericks coach Rick Carlisle said. “He’s really worked on developing his outside shot. His three has gotten a lot better. He’s gotten stronger and more experienced. He’s done well. He’s had some really good opportunities to play for us. He’s ready and he’s a great guy to have on our team.”

Collinsworth’s contract is not guaranteed for the final two years, but he has planted his foot in the door. Dallas loves his versatility. Collinsworth is a player who can play both guard positions and at small forward on offense. He also has the ability to guard those same positions.

“I like the fact he can play three positions,” Carlisle said. “Playmakers are at a premium at this day and age in the NBA and he’s a playmaker.”

Versatility ended up being a trademark for Collinsworth while at BYU. He set an NCAA record with 12 career triple-doubles. As a junior, he also set an NCAA single-season record by recording six triple-doubles that year alone.

Collinsworth has focused on showcasing his versatility in the NBA. He plays to his strengths and feels like that’s why he is where he is now.

“In a world that highlights weaknesses (and) highlights mistakes, you can caught up in it at times,” Collinsworth said. “There’s a time and place to work on them and emphasize them, but I just focused on my strengths when I was out there on the court.”

One of the perks Collinsworth has enjoyed with playing for Dallas is getting a chance to be a teammate with his favorite NBA player. Since he was in third grade, he watched Dirk Nowitzki and looked at him as a basketball role model. Now Nowitzki serves as a role model for the rookie guard.

The duo connected on a memorable play shortly after Collinsworth signed with the Mavericks for the rest of the season. Collinsworth dished to Nowitzki and set him up for his first slam dunk of the season in a 130–123 win over the Los Angeles Lakers on Feb. 10.

Nowitzki, Collinsworth said, has served as an important mentor to him during his NBA journey.

“It’s cool just to see what makes him so good,” Collinsworth said. “Just be able to see even at his 20th season, his routines, his habits, how hard he works. He’s just a great guy. He’s fun to be around.”

Coming and going: movies and shows on Netflix in March 2018 Previous post