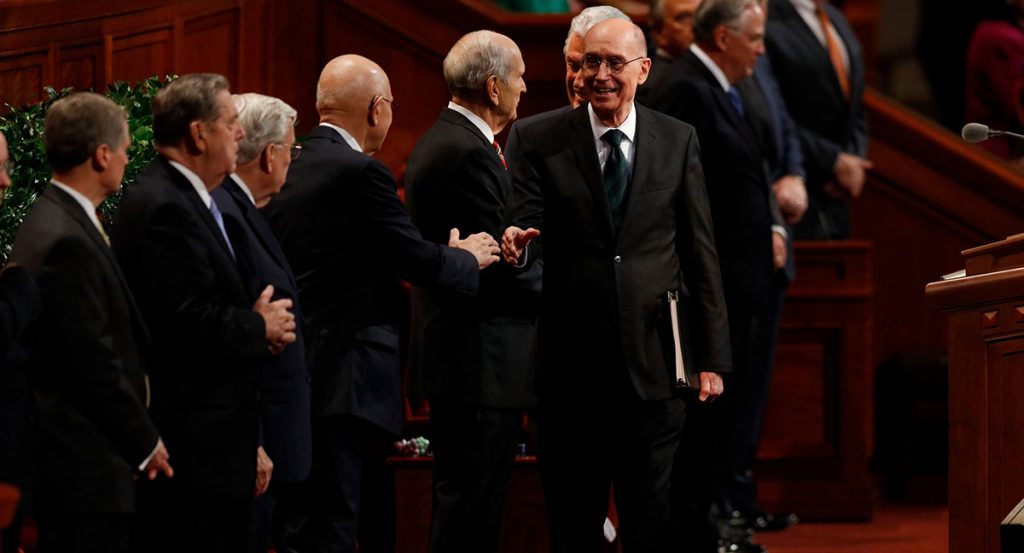 President Henry B. Eyring, counselor in the First Presidency for The Church of Jesus Christ of Latter-day Saints, shakes hands with members of the Quorum of the Twelve Apostles. (Photo courtesy of LDS Church)

The 188th Annual General Conference for The Church of Jesus Christ of Latter-day Saints begins on March 31.

During the two-day worldwide conference, which ends on April 1 after five two-hour sessions, LDS Church leaders will share messages over the pulpit.

Members of the LDS Church are encouraged to study the general conference talks during the six months between the two sessions.

During his closing remarks during October’s general conference, Elder Neil L. Andersen, a member of the Quorum of the Twelve Apostles, quoted then-President Thomas S. Monson:

“Take the time to read the conference messages. Ponder [them]. … I have found … that I gain even more from these inspired sermons when I study them in greater depth. The teachings of general conference are the considerations the Lord would have before us now and in the months ahead.”

Here is a schedule from March 4 to March 31 to read or listen to every October 2017 General Conference talk before the next session of general conference begins:

“Turn on Your Light” by Sister Sharon Eubank

“Abiding in God and Repairing the Breach” by Sister Neill Marriott

“A Yearning For Home” by President Dieter F. Uchtdorf

“The Need Before Us” by Sister Bonnie L. Oscarson

“The Plan and the Proclamation” by Elder Dallin H. Oaks

“I Have a Plan For Thee” by Elder John C. Pingree

“The Living Bread Which Came Down From Heaven” by Elder D. Todd Christofferson

“By Divine Design” by Elder Ronald A. Rasband

“The Heart of the Widow” by Elder O. Vicent Haleck

“The Book of Mormon: What Would Your Life Be Without It?” by President Russell M. Nelson

“The Priesthood and the Savior’s Atoning Power” by Elder Dale G. Renlund

“The Truth of All Things” by Elder David F. Evans

“Earning the Trust of the Lord and Your Family” by Elder Richard J. Maynes

“The Lord Leads His Church” by Elder Henry B. Eyring

“That Your Joy Might Be Full” by Sister Jean B. Bingham

“Has the Day of Miracles Ceased?” by Elder Donald L. Hallstrom

“Exceeding Great and Precious Promises” by Elder David A. Bednar

“Turn to the Lord” by Elder W. Christopher Waddell

“Lord, Wilt Thou Cause That My Eyes May Be Opened” by W. Craig Zwick

“Fear Not To Do Good” by President Henry B. Eyring

“Apart, but Still One” by Elder Joni L. Koch

“Do We Trust Him? Hard is Good” by Elder Stanley G. Ellis

“Seek Ye Out of the Best Books” by Elder Ian S. Arden

“Love One Another as He Has Loved Us” by Elder Jose L. Alonso

“The Voice of the Lord” by Elder Neil L. Andersen

For a quick review, read one-sentence summaries from the 187th Semiannual General Conference for The Church of Jesus Christ of Latter-day Saints here.