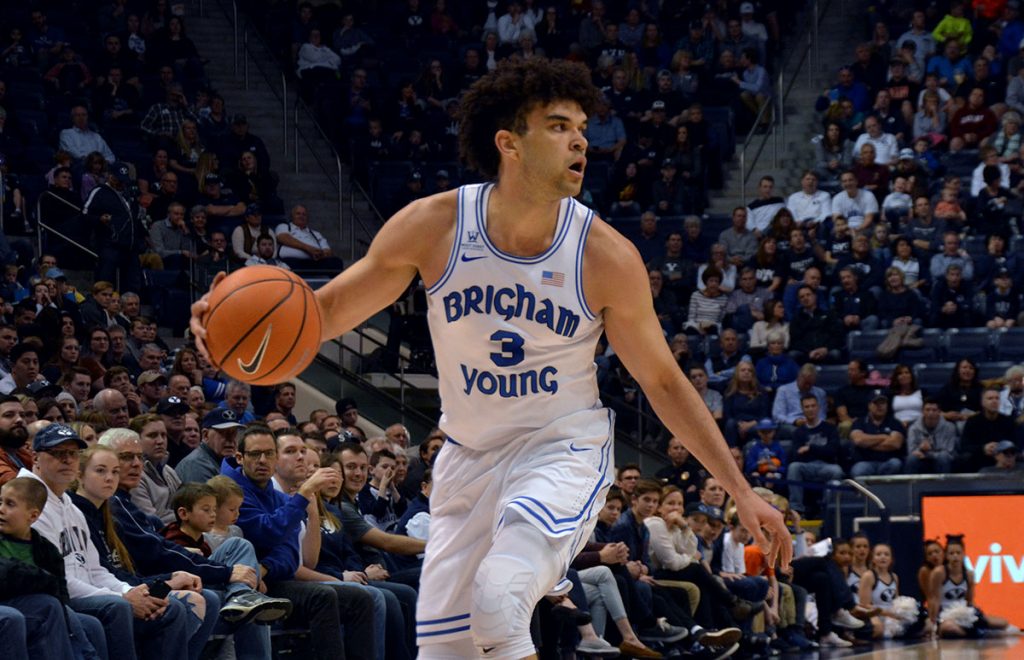 BYU junior Elijah Bryant led the BYU offense in its 85–79 win over San Diego in the first round of the WCC Tournament. Bryant scored 27 points in the win. (Photo by Rebecca Lane/UV360)

After losing to San Diego just two weeks ago, BYU basketball earned redemption against San Diego in the first round of the West Coast Conference Tournament on Saturday afternoon.

The Cougars beat the Toreros 85–79 in Las Vegas, advancing to the semifinals.

“They played a great game of togetherness and toughness today,” said BYU head coach Dave Rose. “They did a great job of fighting mentally and executing down the stretch. These guys are engaged and they want it and I’m proud of them.”

When the two teams met in San Diego during conference play, the Cougars struggled against the Toreros’ physical defense. This time around BYU ensured it came out playing aggressively, which showed in a total of 64 free throws shots between the two teams. In fact, three total players fouled of the game, including two Cougars: BYU junior Elijah Bryant and BYU sophomore TJ Haws.

“Coach gave us a lot of drills to help us prepare to finish through the physicality even if we didn’t get the foul called and that is how we prepared,” said Bryant, who led the Cougars in scoring with 27 points.

BYU advances to the semifinals against No. 22 Saint Mary’s on Monday, March 5. The game, which will be broadcast on ESPN2, begins at 9:30 p.m. MST.

UVU basketball closed out regular season play with a 73–47 win over Seattle U on Saturday at the UCCU Center. The win earned UVU (29–9, 10–4) the No. 2 seed in the Western Athletic Conference Tournament behind New Mexico State.

“This was a great game for our guys. We’re really proud of our home record this season and it’s something very special to us,” said UVU head coach Mark Pope. “We’ve done some great things this season but now it all comes down to winning three games in Las Vegas. Our team is really confident after securing second place, and now we’ll see if we can with three in a row on a neutral floor.”

UVU will play No. 6 CSU Bakersfield on Thursday, March 8 at 3:30 p.m. MST in Las Vegas. The game will be broadcast on ESPN3.

UVU women’s basketball team ended its season with a 83–53 loss to Seattle U on Saturday. The Wolverines closed regular season play with a 5–9 conference record and 11–18 overall record, which lands the team as the No. 6 seed going into the WAC Tournament.

On Wednesday, March 7, the Wolverines will open the WAC Tournament with a game against No. 3 Grand Canyon at 1 p.m. MST.

“This is exciting. I’m happy for our guys,” BYU head coach Shawn Olmstead said. “We came out playing with confidence and did a good job of limiting our errors and capitalizing on a few UCLA mistakes.”

The Cougars next travel to Honolulu, Hawai’i to compete in the Outrigger Resorts Invitational from Mar. 8-10. The first match will be against Penn State on Thursday, Mar. 8, at 4 p.m. HST.

UV To Do: Calendar of events for March 2018 Next post