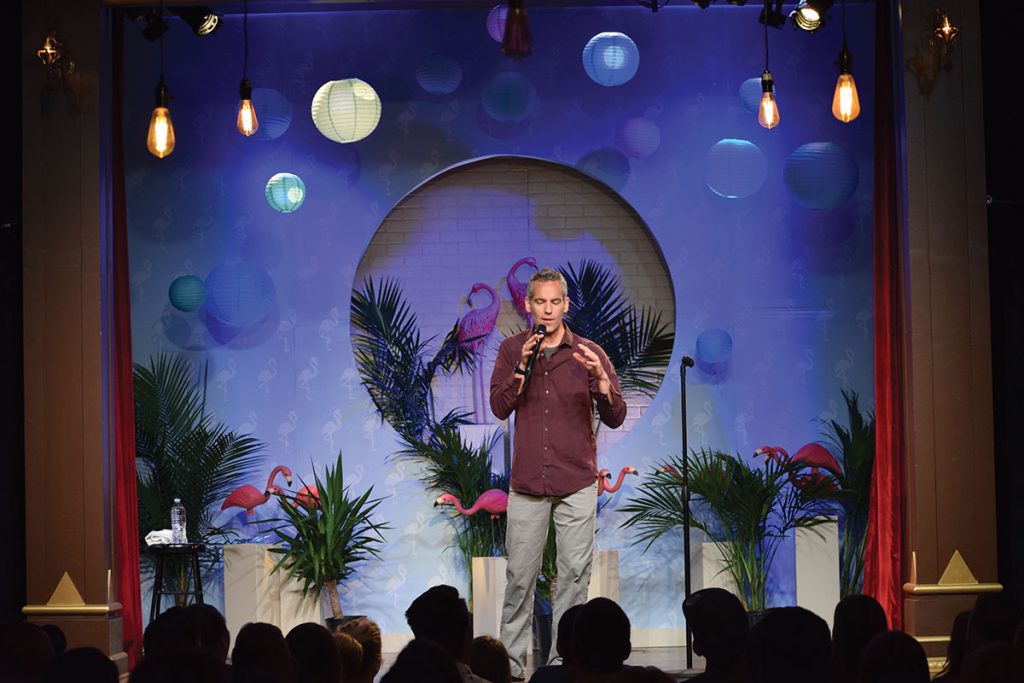 Isaac Halasima, director of “The Last Descent,” was chatting with VidAngel about payment options where viewers “tip” creators for good work.

“He mentioned that he thought the tipping system would work well for stand-up comedy,” says Neal Harmon, co-founder and CEO of VidAngel.

Neal and the VidAngel team began researching and found that stand-up comedy was popular on other streaming services such as Netflix. However, VidAngel also found that most of the specials were rated TV-MA — the type of programming VidAngel has fought hard to cleanup.

So, with that — and the requisite due-diligence — VidAngel Studios created its own solution: Dry Bar Comedy.

The one-of-a-kind comedy club — located in downtown Provo — scouts “clean” comics to perform live in its alcohol-free confines. Each performer is rated by the live audience (up to five stars) and those rating four stars or higher get published for online streaming.

“When they get published, the comedian gets paid on how many views they get and how much people filter the content,” Neal says. “If there’s no filtering, they get a huge bonus.”

Social media — including YouTube — is a major marketing tool for the brand. Starting with Facebook (60 million views in the fourth quarter of last year), Dry Bar Comedy made its way to mobile devices around the world. The YouTube channel has 56,204 subscribers, with 21,000 added within the last month.

“Our YouTube is catching up,” Neal says. “We’re building an audience with its own business unit within Dry Bar. It’s a channel, but we only publish a small percentage of the special, so people still go to VidAngel to watch the performance.”

Comedians are excited about the idea of doing less-objectionable material. Comedians who can reach a wider audience — including families — have more appeal for television shows and even cruise ships.

“We’ve had a number of our comedians wonder why they don’t have clean comedy clubs in L.A. or New York,” Neal says. “But hey also point out that Provo is unique. They say there’s ‘clean,’ and then there’s ‘Provo clean.’”

The model motivates comedians to have clever cleanliness, providing audiences with stand-up options they can give an ovation for.

And even tip a little extra.

Why Dry Bar Comedy? “We saw there was a chance to carve out a niche for clean stand-up comedy that people could trust,” says Neal Harmon, co-founder and CEO of VidAngel and owner of Dry Bar Comedy.
How do you find comedians? “We have scouts find people who have enough clean content for an entire show,” Neal says.
Advice for marketing via YouTube? “Begin your YouTube strategy with distribution in mind. Sometimes people put great effort and expense into content but fail because they show the wrong first five seconds or they publish it in the wrong format. Don’t just dump on content.”