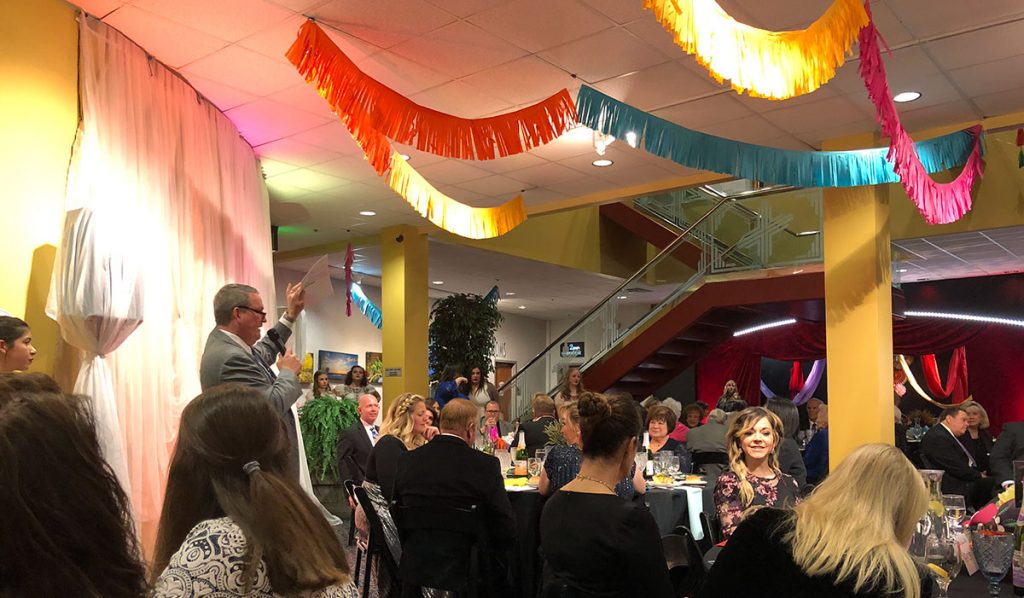 The SCERA Theatre recognized nine members of the community for their contributions to the local community theater at the 13th Annual Star Awards on Saturday night. (Photo by UV360)

The 13th Annual SCERA Star Awards lived up to its name on Saturday, March 10, as the Orem icon honored nine local artists, including YouTube superstar Lindsey Stirling as well as musician Ryan Shupe and sculptor Angela Johnson. James and Andrea Clarke were honored for their financial support of the arts and the renaming of the Clarke Theater at the SCERA.

The night included a silent and live auction to raise money for SCERA, along with a Mexican-themed black tie dinner served by UVU Culinary Arts.

“We recognize that the scope of talent and commitment to the arts in Utah is tremendous, and the Star Awards are a way of calling attention to their achievements and applaud their talent and dedication,” said Adam J. Robertson, SCERA President and CEO. “The challenge of the nominating committee is in choosing from an amazing array of people, which is the kind of challenge every arts organization should have.”

Each award recipient was honored with a video featuring their friends and associates sharing exceptional qualities and stories about the honoree, and then emcee Brian Carlson of ABC 4 Utah invited recipients up to receive their award and share a few words with the live audience, as well as those joining via Facebook Live.

Below is a full list of recipients in the individual categories:

Before Lindsey Stirling made a name for herself on YouTube, the dancing violinist was performing at local venues, one of which was the SCERA. Now the unique musician has climbed to more than 10.5 million YouTube subscribers and sells out concerts around the globe.

In the midst of a national tour, Stirling finished her degree in recreational therapy at BYU in 2015. In the last year, Stirling released her first Christmas album, “Warmer in the Winter,” and finished second on Season 25 of “Dancing With the Stars.”

A fifth-generation fiddler, Ryan Shupe was meant to be part of a bluegrass hybrid band. Shupe and his band, Ryan Shupe & The RubberBand, are most famous for their hit single, “Dream Big.”

Angela Johnson is the mastermind behind “The Light of the World” sculpture display at Thanksgiving Point’s Ashton Gardens in Lehi. The collection of 35 larger-than-life sculptures depict the life of Jesus Christ.

Bill and Marilyn Brown have been a part of the arts their entire lives. While professionally Bill was a real estate broker, he was passionate about theater. He acted in high school and studied to become a drama teacher at BYU. With his wife, he opened two community theaters in Springville: Villa Playhouse and the Little Brown Theater.

Marilyn has published more than 20 books. She has won multiple awards for her career as an author, including first place and honorable mention in the Utah State Fine Arts Awards, the first Mayhew Prize at BYU, First Novel Award for the Association of Mormon Letters, First Place in both poetry and short story from Utah Writers, a Whitney nomination and Whitney Lifetime Achievement Award.

Together the couple opened The Brown House of Fine Arts Gallery and Studio in 2008.

In 10 years as a company, the Grassroots Shakespeare Company is a collaborative touring ensemble of multidisciplinary artists. The group creates joyous, vibrant productions inspired by Shakespeare’s original staging techniques. Most of the group’s performances are free in public parks around Utah County.

Founded in 2000, the Utah Hispanic Dance Alliance features dancers who want to preserve the ethnic dance traditions of Latin America and promote community inclusion. In January 2013, UHDA was invited to represent the State of Utah at President Obama’s 2nd Inaugural Parade in Washington, D.C.

Andrea and James Clarke — Friend of the Arts

Andrea and James Clarke have donated funds throughout the years to the SCERA, partly because of their love for the arts and partly because James’ mother performed at the SCERA in her youth. The Clarke’s own Clarke Capital Partners, a global growth equity and alternatives firm.

The Heber Valley Western Music and Cowboy Poetry Gathering began as a one-night event in Heber Valley in 1994. More than two decades later, the event recognizing Western life lasts for five days. The next event is in the fall from October 24–28.

Bonnie Busco has been a part of Provo’s Freedom Festival for years. She co-created and directed “Cries of Freedom – The Musical,” which has performed as part of the festival’s outreach activities in Orem’s SCERA Park. Besides telling history, the play showcases some of Busco’s music and choreography.