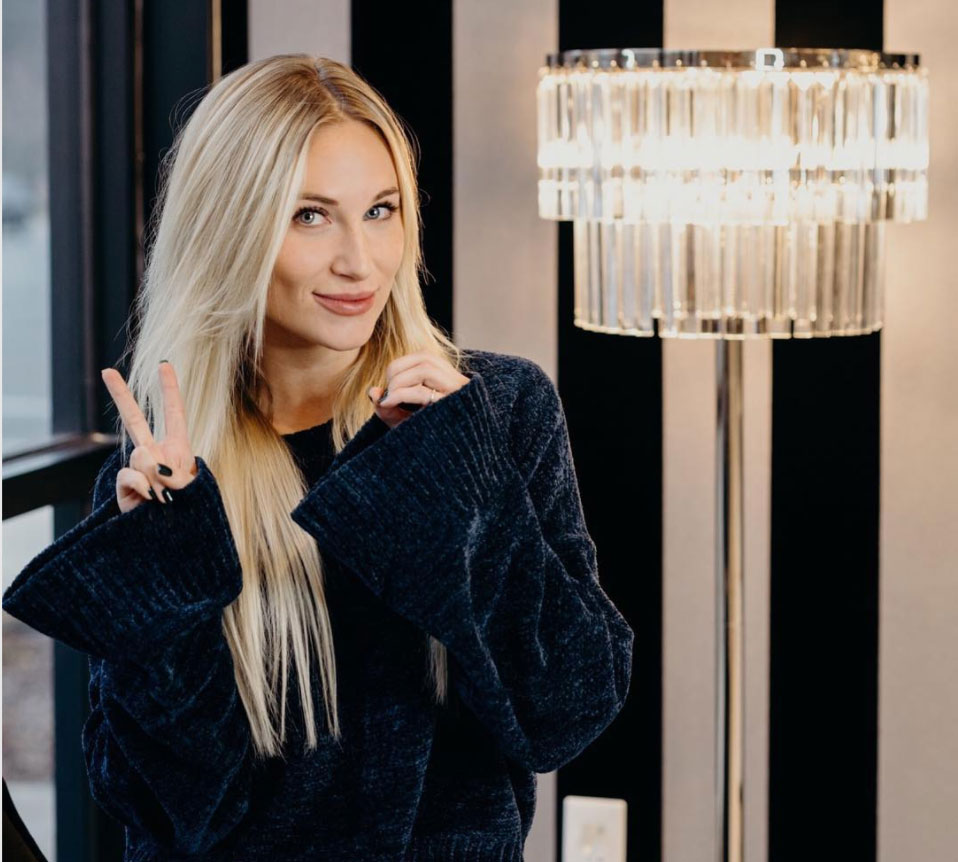 Maquel Cooper, an American Fork native who now lives in Vineyard, Utah, was one of 30 contestants on season 22 of ABC’s “The Bachelor.” (Photo courtesy of Maquel Cooper’s Instagram)

Utah County native Maquel Cooper competed on season 22 of “The Bachelor” for Arie Luyendyk Jr.’s heart. Although she didn’t find love with the bachelor himself, Cooper found love in other areas: she loved not having her phone, not being on social media and hanging out with her fellow contestants, who she describes as her “sisters.”

“It was cool to see other girls from other religions and other states and how similar they actually are to me, how alike we are and how much I can get along with them,” said Cooper.

Cooper values the friendships she made while filming “The Bachelor.” When Cooper wasn’t out on a date with Luyendyk, she got to spend her time with her friends and fellow constants doing activities that didn’t involve technology — such as painting nails, laying out by the pool, doing face masks and hair masks — all in preparation for the next day. Cooper mostly spent her time working out and cooking with her BFF Lauren Burnham, who went on to win “The Bachelor” and is currently engaged to Luyendyk.

Since the show ended, she has kept in contact (and seen) a few of the her co-stars, including: Bekah Martinez, Sienne Fleming, Ashley Luebke and Jacqueline Trumbull. This summer, Cooper is planning on going to Panama with Burnham and her fiance Luyendyk.

“If a girl goes on that show just for a guy, she is psycho because you spend way more of your time with the girls,” Cooper said. “I had five minutes here and there with Arie, but I spent days and nights with these girls. That’s really what I got out of it — amazing friendships.”

If her friends from the show ever came to Utah, Cooper would show them Utah’s outdoor wonders with activities such as boating, hiking, kayaking or canoeing, depending on the season.

“I would take them outside because it so pretty here,” Cooper says.

Bittersweet moment watching this season of the bachelor wrap up. Such an unforgettable journey I’ll never forget, so grateful to have been able to meet so many beautiful smart women, and to learn so much about myself and what I want in a partner. happy for @bkoof for being able to have a second chance at love, she deserves it more than anyone!! And so excited for @laureneburnham. She’s one of the most INCREDIBLE people to have walked the earth and I’m happy she’s able to break down her walls. ❤ #cheerstolove

Besides making new friends, Cooper also gained a few new friends on social media. Most of her 70,000 new followers are nice but some are not. Cooper says there are a few accounts who constantly troll her on Instagram. Sadly, the trolling leaked into other mediums before the season aired on TV. An anonymous caller called into a popular bachelor podcast, “The Almost Famous Podcast” with Ben Higgins and Ashley Iaconetti, and said a lot of rude things about Cooper. The accusations were based on rumors and lies, according to Cooper. When negativity comes her way, whether it’s on social media or through word of mouth, Cooper tries to remember one simple thing.

“You’re always going to have trolls on Instagram who want to bring you down. But the two things I have to remind myself is I know how I am, I know what I stand for and what type of a person I am. Those people don’t. At the end of the day, it doesn’t matter what they say because I know that I’m a good person.”

While filming “The Bachelor,” contestants aren’t allowed to have their phones or computers, cutting off contact with the outside world. So when Cooper was on the show, she didn’t have any ties to the trolls that lay waiting for her outside of “The Bachelor” world, and she loved it.

“I came to realize that I hate my cell phone and I hate social media,” Cooper said. “I realized how damaging it is to people and to relationships. Stepping away from my cell phone, my anxiety went away and my self-esteem went up because I wasn’t comparing myself to other girls. I wasn’t comparing likes and followers. And you don’t think that you care about that, but subconsciously you do. Stepping away from that was the best.”

In the back of her mind,  Cooper had always wanted to audition for “The Bachelor.” One night during a sad moment of feeling like she “was going to be single forever” Cooper submitted an application to be on “The Bachelor.” A few weeks later, a producer from ABC called and Cooper was officially in the running to become a contestant on the show. When Cooper made it to the top 50, ABC flew her out to California where she had to take tests and do on-camera interviews. At first, producers let her do or have whatever she wanted.

“I think I was the first girl to get accepted,” Cooper said. “I think they thought that [I was] going to be crazy or go far and I was neither. At first, they were like, ‘you can have whatever you want.’ Then they realized that [I’m] not drama at all.”

Cooper found out that Luyendyk would be the bachelor a week before she left to film the show. Despite the fact that she was hoping that the bachelor would be Peter Kraus, a contestant from season 21 of “The Bachelorette,” Cooper still gave Luyendyk a chance because she was looking for a new dating experience.

“I like older guys and I do like guys who are calm and he is both of those things,” Cooper said. “When I first met him, I thought he was kind of nerdy, but really nice, not what I would normally date, but I’ll give it a shot.”

[pullquote]“I’m all about new experiences and things that push you out of your comfort zone. And [‘The Bachelor’] is definitely something that was way of out of my comfort zone. I had never done anything like this before. I [thought], why not? Why not gain a whole new experience and learn more about myself and how the world works and how other people work.” — Maquel Cooper, “The Bachelor” contestant[/pullquote]

On the dates, Cooper appreciated the camera operators and producers watching their every move. This made for a safe dating environment for Cooper and her friends.

“’The Bachelor’ is actually a very safe dating atmosphere because you know the guy isn’t going to be texting you constantly afterwards and he can’t be physical with you because it’s in front of cameras,” Cooper explained. “So it’s all about talking.”

Unlike other contestants, Cooper was OK with 30 other girls dating the same man she was. At the time, Cooper was still trying to get back into the dating scene. Cooper was realistic about the chances of  her ending up with Luyendyk and was excited to have a new experience that would push her back into dating.

“[I figured] eventually I’ll be eliminated but at least I’m going to learn a lot from this and put myself out there,” Cooper reflected. “At the time I wasn’t even dating people, I didn’t even want to go on dates. I didn’t want it at all, but I was going to push myself to go on dates with [Luyendyk] and take baby steps back into the dating world. And if we happened to fall in love and we ended up together, great. I felt like this was a good stepping stone to put myself out there. ”

This big, nationally televised stepping stone has opened new doors for her in dating, modeling, photography and traveling. As a person who thrives on new experiences, Maquel hopes to continue to pursue her photography and modeling career while still pushing herself to get out of her comfort zone.

“I’m all about new experiences and things that push you out of your comfort zone,” Cooper said. “And [‘The Bachelor’] is definitely something that was way of out of my comfort zone. I had never done anything like this before. I [thought], why not? Why not gain a whole new experience and learn more about myself and how the world works and how other people work.”

Before stepping into the spotlight, Cooper started her photography career at the young age of 17, while taking photography classes, working at a studio and freelancing on the side.

“I have always been more artistic, but when I started working [at the studio], I realized that I really liked it,” Cooper says. “They all started to freak out and told me that I had an eye for photography. They would say, ‘this is natural for you.’”

After quitting her job at the studio to build her own photography business full-time, Cooper signed with a modeling agency a year later.

“Photography is definitely my main passion and it is more substantial. I would like to be more of a travel wedding photographer. I think that shooting elopements would be so fun and when people go on vacation, they take me along. I’ve done that in the past and there is so much more feeling to it. I still like modeling and I hope to model for bigger companies.”