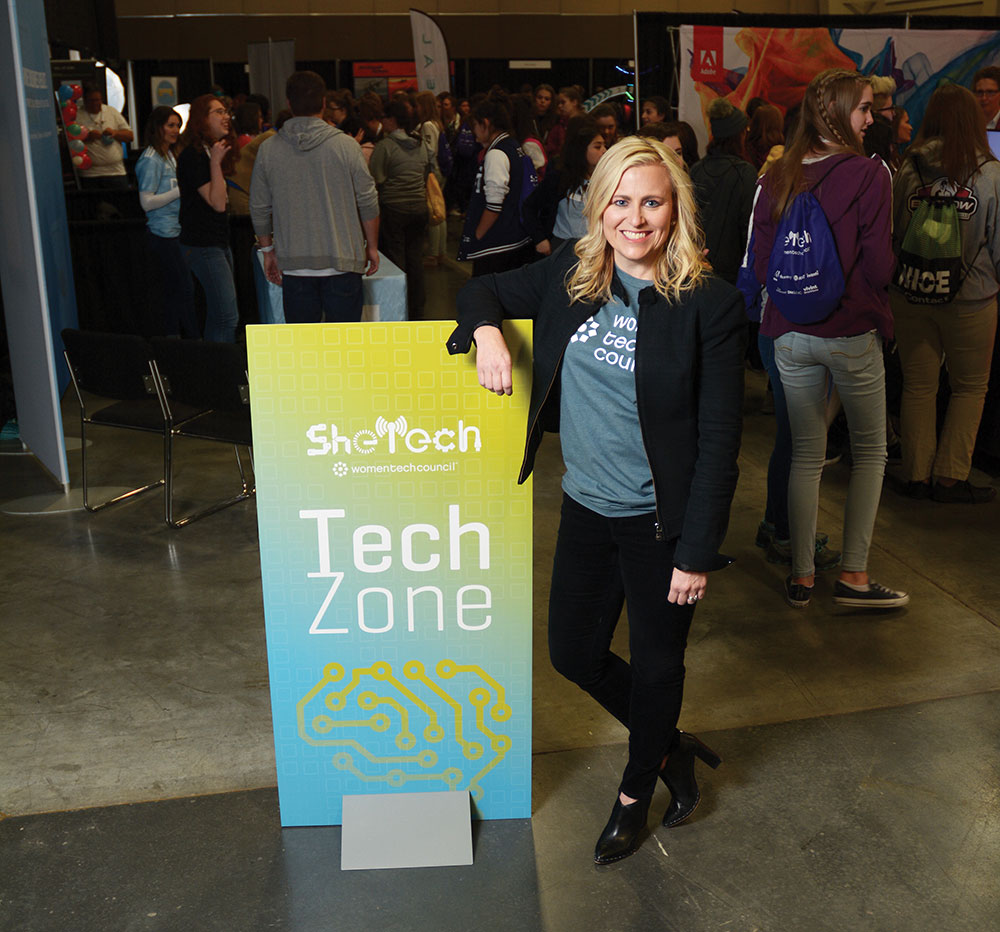 IN THE ZONE. SheTech was held March 1, 2018, at the South Towne Expo Center. At the all-day event, nearly 2,500 high school girls from all over the state attended workshops, met with industry professionals, competed in competitions, interacted with local tech companies and left inspired for their futures. To learn more about the annual conference, visit SheTechExplorer.com. (Photo by Dave Blackhurst/UVBizQ)

Girls just wanna have opportunities. And role models. And tech careers. And inspiration. And representation.

And lucky for Utah girls, they have Cydni Tetro.

As co-founder of the Women Tech Council and organizer of SheTech, a STEM activation and engagement platform for girls, Tetro has been instrumental in elevating our state’s conversation about women in technology. But the best part? Her talk matches her walk. This past March, nearly 2,500 high school girls from all over the state gathered at SheTech to celebrate STEM learning, meet women currently working in tech, and envision how smart their own futures could be.

Our kind of fun. (That’s all we really want.)

As one of only three women in her computer science major at BYU in 1996, Tetro has set out to majorly change the landscape of women in technology.

Tetro has certainly been the exception in her 22-year career. With key roles at Novell, FamilyLink, Disney, 3DPlusMe, and now ForgeDX, she has typically been the lone female executive.

“I never really interacted with women at my day jobs. That wasn’t my normal,” she says.

So 10 years ago, Tetro got together with a group of senior executive women to create a new normal, and the Women Tech Council was born. It has since grown to more than 10,000 members, and it is a community that celebrates, collaborates, and connects women — all while proving that increasing the number of women in tech companies increases bottom lines.

“That has been our core focus from day one,” Tetro says. “We support and mentor — and we do it while showcasing the profound economic impact of women in technology. Studies prove that the more women you have on your team, the more successful your company will be.”

[pullquote]“Community is a huge part of who I am — always has been. I crave learning from those around me. Our community here is absolutely incredible. Local companies and executives are volunteering their time, money and resources to support our program and get these young girls inspired by stem. But that’s utah for you. I can’t think of a better or more supportive ecosystem in the world.” — Cydni Tetro, Women Tech Council[/pullquote]

The current stats for women in technology can be discouraging: Women make up 23.5 percent of Utah’s tech workforce, and 28 percent nationally. But with SheTech, the goal is to get these crucial conversations started sooner.

Bottom line: It’s difficult to become what you cannot see.

“These girls don’t have any role models. They don’t know women in STEM. And 90 percent of them are not considering STEM as a career path,” Tetro says. “How do we change that? Mentoring. It’s the key to everything.”

The first SheTech conference was held at UVU in 2014, with 300 high school girls in attendance. This year there were nearly 2,500 girls. And the future? Every single girl in Utah.

“There are 50,000 young women in our ecosystem here, and we want to reach every last one of them,” Tetro says. “You start to see the change in these girls. They start to believe they can actually be part of the tech community. It alters their path, and I can’t think of anything better than arming them with that confidence.”

As for that 90 percent stat, SheTech is turning it on its head.

“After participating in our internship program — which has over 250 internship opportunities each year — 90 percent of those girls are now pursuing an education in STEM,” Tetro says. “How great is that?”

Tetro’s favorite moments of this SheTech journey have been those success stories — girls who came, saw, learned, and left energized.

“I had a mother come up to me who said her daughter was off to Stanford and will now be pursuing a STEM degree — and she gives all the credit to SheTech!” Tetro says. “We are giving these girls meaningful opportunities. And I can’t tell you what it means to be a part of it.”

Sisters Are Doing It For Themselves

1.The tech age. With its various programs and initiatives, the Women Tech Council supports all age groups — from high school to college to careers. Their engagement with schools and local companies is unparalleled.

2. Re-member this. Did you know It’s free to be a member of the Women tech council? “We are membership-driven. We never want to discourage a woman from being a part of the organization and learning from this amazing community,” Tetro says. “so Since day one, we’ve raised all of our funds through sponsorships.”

2018 Executive of the Year: Case Lawrence, CircusTrix Next post