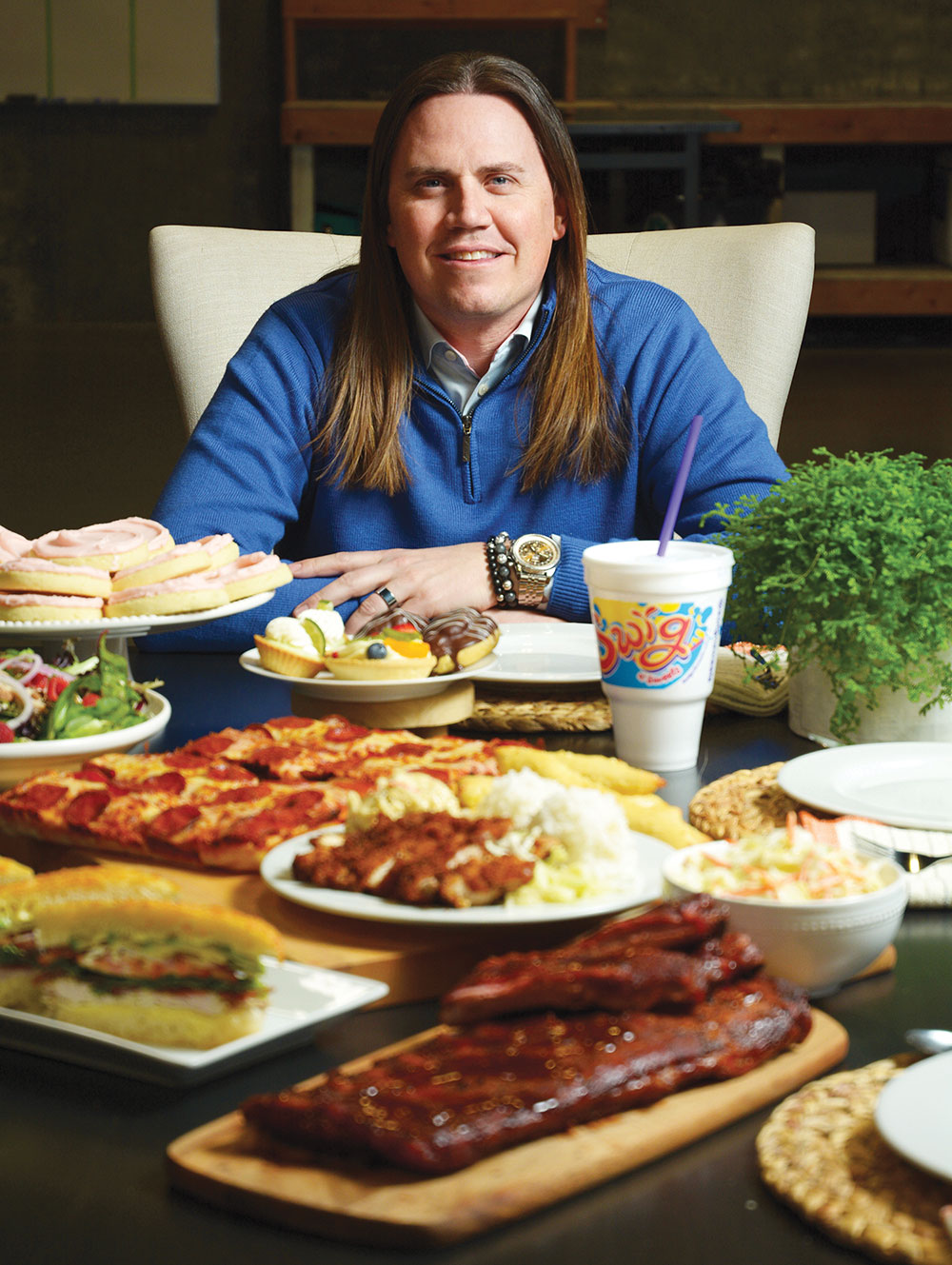 I’ll TAKE ONE OF EVERYTHING: Four Foods Group scales brands such as Swig, Kneaders, Little Caesars, R&R BBQ and Mo’ Bettahs. The company works with restaurant owners who curate the flavor profile while Four Foods Groups bakes up strategies to take the concepts to the masses. (Photo by Dave Blackhurst/UVBizQ)

Ten years ago, Andrew Smith had a plate of experience running and selling tech companies and was looking for his next menu of experiences.

“I went through the dot-com bubble and the recession, and those cycles suck,” Smith says. “I was searching for an industry where there were inefficiencies I could solve. And I found it in restaurants that are ready to scale. There’s always a need for food. People can be out of jobs, but we’ll still be eating.”

History in the Baking

Prior to Four Foods Group, Smith was busy working on his third tech company, Lehi-based AxisPointe. The post-construction outsourced services company had the building blocks of greatness — much of which was thanks to Smith’s “always-a-startup” mentality.

“It doesn’t matter how successful the company is, $20 is still $20,” Smith told BusinessQ in 2008. “I want my employees to have the startup spirit of ‘never say die.’”

He sold AxisPointe and left the tech industry to start Four Foods Group with his wife, Shauna. The restaurant industry (with its scary survival numbers) didn’t phase him for a second. “I know how to take something from nothing to growth.”

And now Four Foods Group is celebrating its 10th anniversary of taking this little piggie to market (R&R BBQ) and giving more than one mouse a cookie (Swig).

“We’ve grown just like any other business,” Smith says. “We fluctuate. We swell when we do an acquisition. We’ve had growing pains. But I’ve been struck by the entrepreneurial bug since moving here from Chicago to study business and marketing at BYU and UVU.”

His sophomore year of college, he dropped out to start his first venture, but he eventually went back and finished his degree at night at age 24.

“I wanted to check the box,” he says. “Especially as an example to my two sons.”

“The biggest question I get asked is whether brick and mortar is dead. I think about that every day. I was on a panel with Shake Shack last week, and we were both asked that question. If it’s dead, then why the hell are people standing in line right now at our restaurants for lunch? We’re never going to stop eating. But I do understand that the restaurant market is pushing for tech, apps and delivery services, and we better do it.”

“At any given time, we plan to have 7-8 brands in our portfolio, which means we anticipate 2-3 acquisitions this year and possibly selling 1-2 of our brands to the next size player who will scale nationally,” Smith says.

Scaling isn’t the same as sautéeing, and Smith knows his skill set.

“Only one in 100,000 restaurants can scale their concept on their own,” he says. “I like to see others take a risk and curate a restaurant that people like, and then Four Foods Group knows how to take a proven concept and scale. We are a hotbed for restaurant concepts within this overall hotbed of innovation in Utah. But everybody oversimplifies how hard this business model is to scale.”

Let Me See Your Profile

Just like bell bottoms, bangs and bubble necklaces, foods go in and out of style.

“Flavor profiles change,” Smith says. “We may love sushi, and then eight years later, for some weird reason in the ecosystem, we’re all tired of sushi and something new starts to pop. At Four Foods Groups, we are hyperfocused on big data to know what’s trending on our menus.”

As Smith travels the country speaking at restaurant conferences and business panels, he’s often asked if brick and mortar is dying in the food world. With Uber Eats and other delivery apps, the younger crowd is staying home and watching Netflix “while a lady with three cats in her car delivers their food,” Smith quips.

But he also believes eating out is about more than the food. It’s also about the experience.

“We still want the hustle and bustle of getting ready and going out to eat,” he says. “Retail is supposedly dying, but shoppers still head to Nordstrom for the customer service. We like to be treated like kings and queens.”

This desire brings execs out of their tech headquarters at the Point of the Mountain, even though many have cafeterias on site.

“They come to Mo’ Bettahs or R&R or any of these places because it feels good to be there and it provides an out-of-office experience,” Smith says.

The 250 employees of Four Foods Group will move into their new Pleasant Grove headquarters in 2019, with room to accommodate up to 750. “Pleasant Grove is the next Thanksgiving Point,” Smith says.

And That Isn’t the Half of It

While Smith isn’t a cookie-cutter looking or sounding Utah County entrepreneur, he does have a cliche answer ­— with a non-typical explanation. One of Smith’s reasons for success is — you guessed it —his wife.

“The idea of balance is BS, and Shauna is the reason things can be out of balance. She helps me keep it that way when I need to,” he says. “Whether she’s at home or in the business — and she’s both — she doesn’t make me choose between being a father/husband and being an entrepreneur. She understands that it’s all one life. And when I come home at 9 p.m. after a long day, there is no guilt trip. She wants to know how she can support me.”

Don’t Show Me the Money

While Smith has seen a few dollar signs in his tech life and now Four Foods Group ($180 million annual revenue. Holla dolla!), the pocket change hasn’t changed him. He advises young entrepreneurs to create an intent that isn’t about money.

“In the beginning of my career, I was driven by measuring success in dollars. It’s not that at all for me anymore,” he says. “Money doesn’t change anything. Well, I can stay in a nicer place in Maui. But I would be fine at the Holiday Inn. Money changes what you can do, but it doesn’t change you.”

1. Like a boss. Coming from tech, Four Foods Group CEO Andrew Smith likes data. And the data likes him. The American Fork-based company yields $180 million in annual revenue via 137 restaurants in 12 states. and More than 4,200 employees call Smith “boss.”

2. You are where you eat. Four Foods Group is building one of Utah Valley’s top revenue companies, and soon they’ll have a headquarters to match. The company will be rising at the Valley Grove Project on Pleasant Grove Boulevard, with R&R BBQ and other Four Foods Group concepts out front. Business lunch, yo!

3. Taste of what’s to come. While Four Foods Group started out as the company that grew Kneaders, they’ve since added four more brands: Swig, Little Caesars, R&R BBQ and Mo’ Bettahs. Smith anticipates the company will add 2-3 brands to their menu during this calendar year.

UV BusinessQ Board: How do you get out of a business rut? Next post