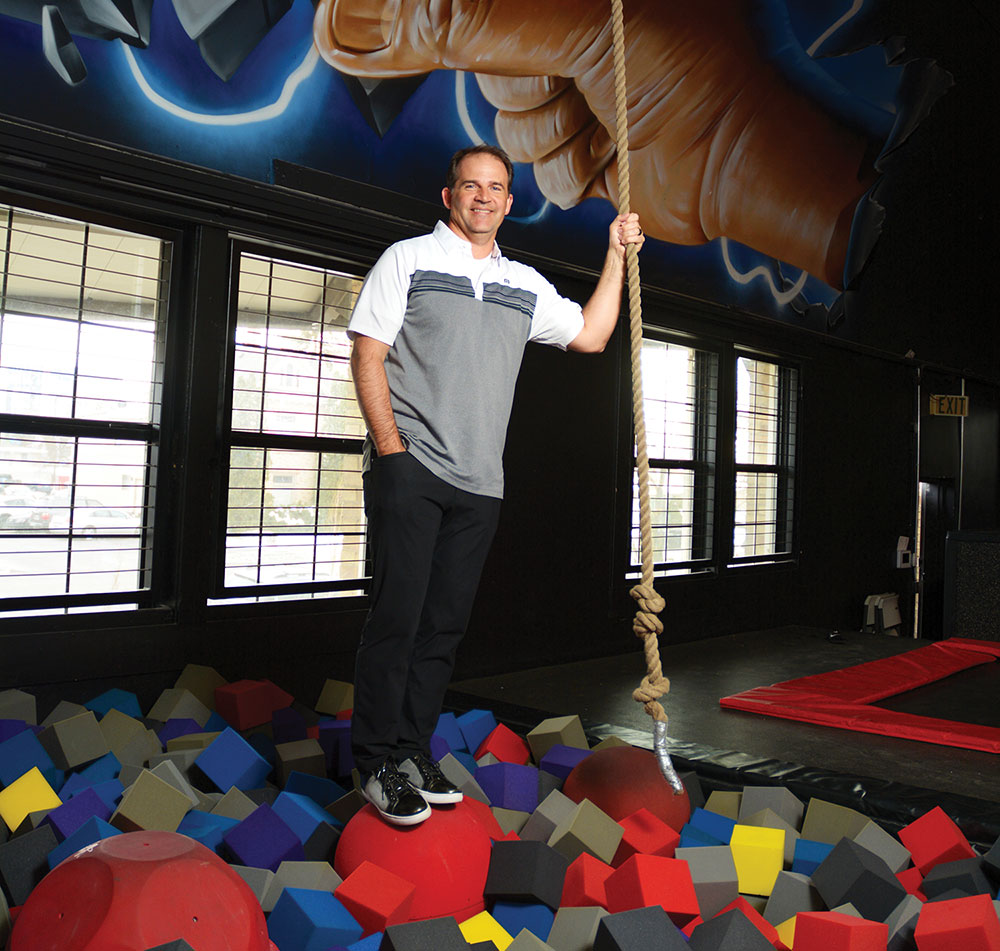 WILL THE CIRCUS COME TO TOWN? There is currently no CircusTrix facility open to the public in Utah — but Case Lawrence is determined to get one here. “We’ll get there,” he says. “We’re getting close.” This circus playground is open to the company’s employees so they can unwind, host their kids’ birthday parties, and dunk basketballs every Friday at 3 p.m. (Photo by Dave Blackhurst/UVBizQ)

So white men can jump.

Case Lawrence has reached new heights with the ascent of Provo-based CircusTrix — the largest developer, operator and franchisor of trampoline parks in the world. It has more than 300 facilities around the globe, more than 3,000 employees, and did $58.3 million in sales in 2016.

But before he soared with CircusTrix, Lawrence’s career hit rock bottom.

A California native, Lawrence pursued a career in commercial real estate in 2002 — and with much success. But when 2008 hit, he quickly became a stereotype and a statistic.

“I got wiped,” he says. “I had millions of dollars worth of projects, and it was just a nightmare.”

He spent the next two years desperately trying to avoid bankruptcy.

“We came close many times, but we were blessed to avoid it,” he says. “I always tell people, no matter what CircusTrix grows into, my greatest business accomplishment is avoiding bankruptcy in the great recession.”

After overcoming the odds, Lawrence was at a loss of what to do next. The former lawyer thought about returning to the law, but he had no clear direction.

Then he went to San Francisco  for a Giants game with two of his sons. A friend told him to check out the nearby House of Air, one of the first trampoline parks in the world.

“We were blown away,” he says. “It was such a bizarre, incredible experience. We went there, went to the Giants game, and then we went back to the trampolines. When I left that trip, I knew exactly what I was going to do.”

The direction, it seems, was up.

[pullquote]“We are a circus. We offer trampolines, zip lines, trapezes, obstacle courses — and we are constantly searching for new tricks. We’re sort of the mad scientist of the extreme recreation world, and we are definitely an ode to the P.T. Barnum-era of entertainment. Actually, with the success of ‘The Greatest Showman,’ we’ve watched people come to our parks and try to recreate scenes from the movie — which, let me tell you, has been hilariously entertaining.” — Case Lawrence, CircusTrix[/pullquote]

Magic in the Air

CircusTrix officially launched in 2011, with a 12,000-square-foot-park in Madera, Calif. They opened the second one in North Carolina near Duke University (where Lawrence went to law school). And today they have parks (some as big as 60,000 square feet) from Seattle to Edinburgh to Nashville to Hong Kong (located on the fourth floor of a skyscraper, thank you very much). Twenty more parks are slated to open in 2018.

“The response and enthusiasm has been overwhelming,” he says. “We are the largest in the world at what we do. We have redefined the industry, which has forced us to operate under true originality. What a gift that has been.”

Also in the company’s favor? A change of focus.

After the inception of the company, Lawrence quickly moved the headquarters to Utah for two reasons. First, to be closer to his wife’s family. And second, to gain ground from Utah Valley’s mad entrepreneurial hops.

“I’ve never seen a community pay homage to entrepreneurs the way we do here,” says Lawrence, who was a 2017 winner of the Ernst & Young Entrepreneur of the Year in Utah. “It’s fun to be a part of this ecosystem. In a world of tech superstars, we’re the trampoline guys! How fun is that? And I promise you: CircusTrix would not have been this successful if we had been headquartered anywhere else.”

The Show Must Go On

CircusTrix’s growth has been death defying. They never stop innovating, they use social media to spread the word (“Did it even happen if you didn’t post about it?”), and they have spent the last couple years acquiring their competitors and bringing them into the family brand.

Tricks Up His Sleeve

1. Have empathy. “A truly great leader is someone who has empathy. I know how many people rely on Circustrix to support their families, and I take that responsibility very seriously. Having vision is important. But vision plus empathy is key.”

2. Speak social. “Make your business ‘shareable.’ We’re creating experiences — but more importantly we’re creating shareable experiences.  One of our most popular attractions is popular because the three-second timing of the jump and the angle of the shot are perfect for a mom to snap a cool picture of her kid and then share it online.”

3. Embrace the millennial mindset. “This generation has challenges and quirks in the workforce, but it also has incredible strengthS. Celebrate those strengths and utilize them. For us, our customers are IN that same age group. We’ve learned the millennial mindset by looking at and learning from them. Those young voices have given us some of our best ideas. Period.”