Home Featured Creating ‘Trek: The Movie’ was a trek of its own spanning over a decade

Creating ‘Trek: The Movie’ was a trek of its own spanning over a decade 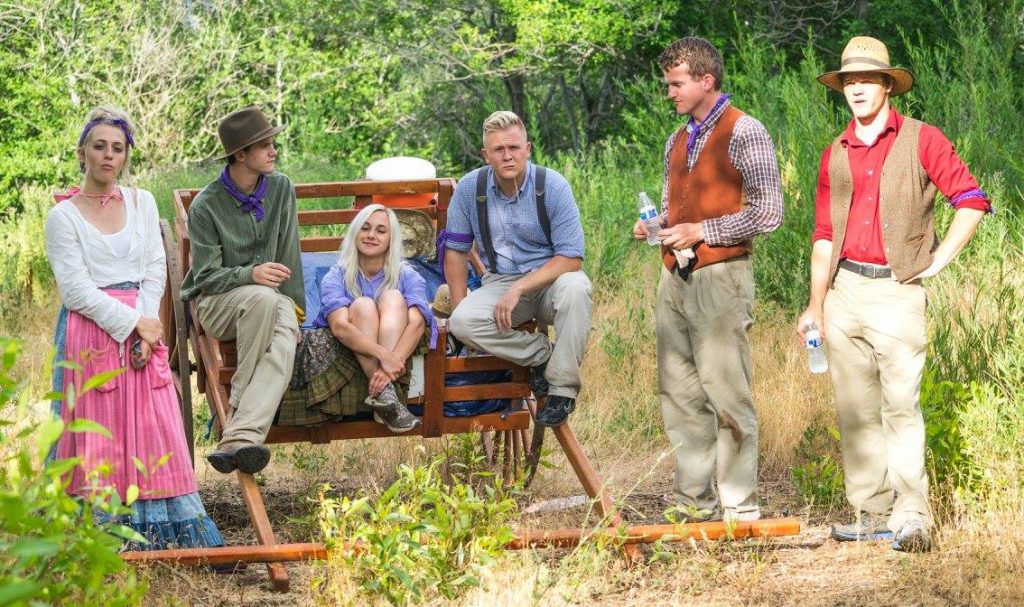 Circle the wagons and pull in the handcarts — “Trek: The Movie” hits theaters April 6.

“Trek: The Movie” tells the story of a teenager named Tom and his peers as they participate in a re-enactment of the pioneer pilgrimage across the plains and learn spiritual lessons along the way.

For screenwriter David Howard (“Galaxy Quest”), writing the script for “Trek: The Movie” and seeing it come to fruition was a trek of its own. Nearly 15 years ago, Howard was approached by a group of his L.A. filmmaking friends who thought that Mormon cinematography could benefit from the success Hollywood had seen in teen coming of age films, such as “Ferris Bueller’s Day Off.” Howard accepted the challenge and worked with Jon Enos to write the script for “Trek.” They sent the script to a few producers, but never heard back.

So the script sat on Howard’s hard drive.

Fast forward a decade to Alan Peterson, the director of “Trek,” sitting in church. His son who had recently returned from a trek of his own was talking about the incredible experience he had on trek. As Peterson listened, inspiration struck.

[pullquote]“Sometimes when people write stories and make films about themes of faith they want to tie things up and make things seem happily ever after and they don’t have problems and it’s all resolved, but life’s not like that. We wanted to make something that felt real.” — David Howard, “Trek” screenwriter[/pullquote]

“As [my son] was expressing some of the experiences that he had, I thought, ‘This would make a great movie. Wait a minute, somebody’s already done this,’” Peterson said.

Peterson reached out to his friend, Howard, who had sent him a script about the sort of Mormon rite of passage a decade earlier. With minor adjustments — such as adding in iPhones and Instagram to match teenagers’ technology infatuation today — the script was ready to go. Howard, after all, had already dealt with the difficult task of balancing comedy and sincerity years before.

“That was really one of the challenges. We weren’t quite sure when we were going to have enough of one or have too much of one and not enough of the other,” Howard said.

“Trek: The Movie” does what Mormon cinema does best — it pieces together the stereotypical Mormon characters and adds a spiritually uplifting message on top.

“The church has its own cultural identity, so there was a lot of fun to be had with creating everything and recreating people who live in every ward,” Howard said, “and their attitudes and their interpretations of the gospel and how seriously they take their callings as leaders. You have those who are more strict and those who are easy-going. You have the natural conflicts that happen between those two groups.”

So Howard and Enos worked out a juggling routine that would have the audience both laughing and crying.

“If you are going to have a certain theme in your play, it’s like juggling — you have to keep all the balls in the air,” Howard said. “You can’t forget one and pick it up later after everybody’s forgotten it. So it was a question of how do we weave these together so that they are all concurrent and so they all stay present in the audience’s mind and so they don’t dominate one another.”

Howard found the solution in the characters. He paralleled the main character Tom, a young man struggling with his faith, with Sterling Bennett, a teenage boy in every sense of the stereotyped definition. By doing that, Tom (played by Austin Grant) could handle the serious themes of the film while Sterling (played by Ryan Mitchel Brown) could chase down sugar and survive and encounter with a skunk.

“We have other characters where they are not carrying that burden,” Howard said. “They’re much more, I don’t want to say superficial, but what is going on in their mind isn’t as heavy as the main character’s [struggle]. We wanted to try to balance the stories with each other.”

With the script ready, Peterson started searching for funding in what he calls the “Jell-O Belt.” And after two years of searching, everything rapidly fell into place one day. Working around deadlines and space availability, the movie came together like a whirlwind in a few weeks. It was only one week from casting call — in which they received over  1,200 applications — to the first day of filming. Then the entire film was shot in about a two week span.

“All of a sudden, things were coming together,” Peterson said. “We had some time frames that we needed to be aware of, other projects shooting in the area. When we had anticipated getting the film released. That put all the pressure on us to get the film made as quickly as possible.”

Luckily for Peterson and his crew, they found all the talent they needed in Utah to fill the young cast.

“I wouldn’t trade any of the actors that we got for anyone out of Hollywood,” Peterson said. 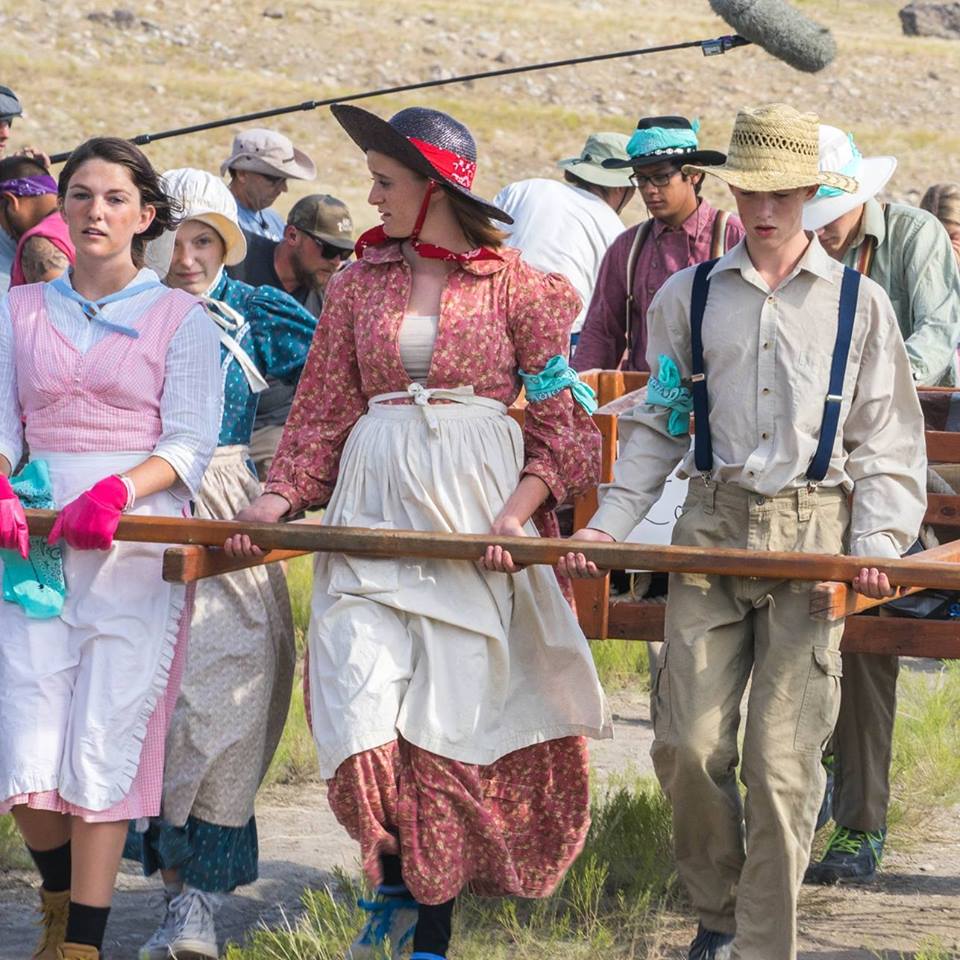 The cast of “Trek: The Movie” pull handcarts while filming. (Photo courtesy of Excel Entertainment)

Avery Pizzuto, who plays Susan in the movie, was one of those local actors. A local actress from Lehi, Pizzuto was excited to audition for a movie that was somewhat a reflection of her own life. When Pizzuto was 14, she attended trek with her local congregation, something she was nervous about at the time since it meant closely monitoring her diabetes. However, she loved her experience on trek, so when Pizzuto saw the breakdown of characters for “Trek: The Movie” included a Type 1 diabetic, Pizzuto was drawn to the character. But one thing didn’t fit — the character was described as a “sickly looking diabetic.”

Her audition — and maybe her expertise — landed Pizzuto the part and she was pulled into the whirlwind movie.

“I was overjoyed,” Pizzuto said. “I was really excited to be able to represent all the diabetics and to show them that it’s not a scary thing to go on trek with an illness.”

Even though Pizzuto personally connects with the film’s storyline, she says the movie is for everyone.

“I’ve invited a lot of my non-Mormon friends,” Pizzuto said. “Every single time they have gone,  they have had a positive experience. What I tell the people is whether you’re Mormon or non-Mormon, you will absolutely love this movie. It is so relatable in so many different ways. It will have you laughing and crying in a whole array of different emotions. There are a couple of jokes that only Mormons will understand, but I promise you there will be Mormons in the movie theater that will be able to explain it to you.”

And Howard and Peterson agree. In fact, they have received feedback from early screenings of the movie from Mormons, non-Mormons and ex-Mormons expressing appreciation for the portrayal of different characters and their spiritual journeys.

“I think people appreciate the fact that we tried to create a diverse spiritual spectrum,” Peterson said.

“Trek” isn’t meant to be an wrap-it-up-with-a-bow type of movie, but instead to share an imperfect “all is well” reality.

“Sometimes when people write stories and make films about themes of faith they want to tie things up and make things seem happily ever after and they don’t have problems and it’s all resolved, but life’s not like that,” Howard said. “We wanted to make something that felt real. It’s a complicated world that we live in. It’s complicated for young LDS kids. It’s way more complicated for my kids growing up than it was for me, so we wanted to reflect a little bit of the complexities that people face today.”

“Trek: The Movie” premieres in select theaters throughout Utah on April 6.