Home Featured Move over brethren, the sisterhood is in town and on stage at the SCERA

Move over brethren, the sisterhood is in town and on stage at the SCERA 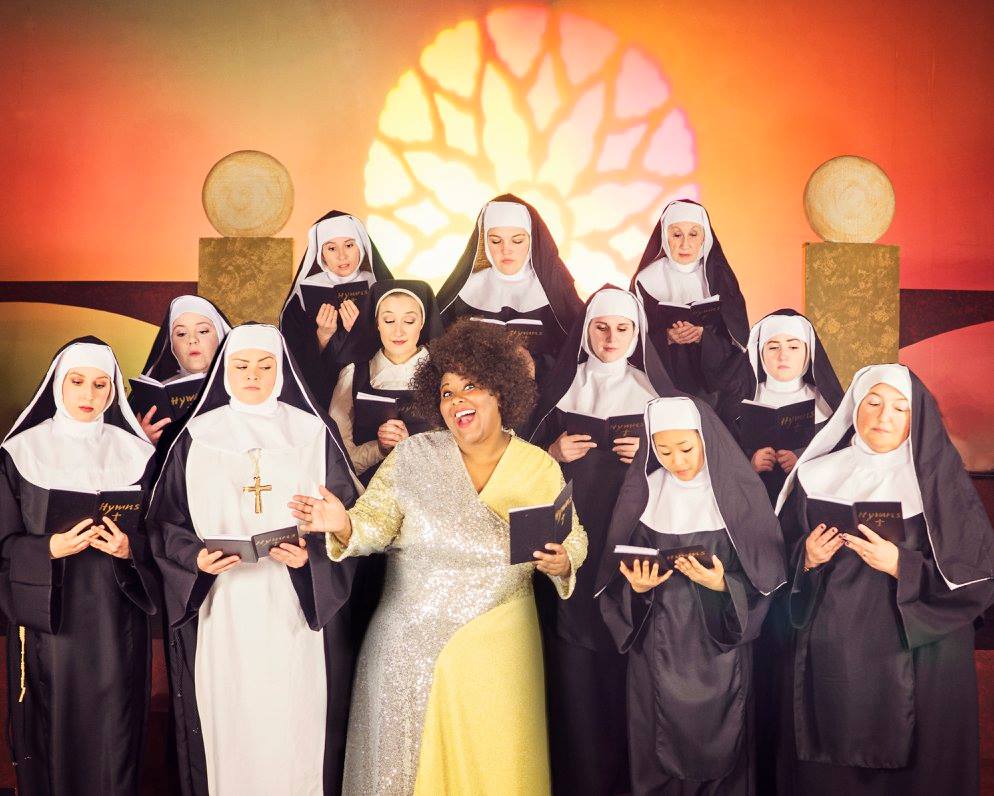 The cast of “Sister Act” includes nuns of all different ages, including one woman in her 80s. (Photo by Rachael Gibson Photography)

Shout the hallelujah chorus — the sisters are in town and taking the stage at the SCERA Center for the Arts for “Sister Act: The Musical.”

Originally a 1992 film featuring Whoopi Golberg, this “match made in a convent” musical follows the same storyline as the movie. The main differences are the location, now in Philadelphia, and the time period, now in the ’70s.

When disco diva Deloris Van Cartier witnesses a crime, she is placed in the witness protection program in an unlikely place — a convent. The show follows Deloris on her journey to protect her life and save the financially struggling convent.

With a female heavy cast, “Sister Act” Director David Smith says women who aren’t in the “typical theater group” came out of the woodworks to audition for the show. He had more than 100 people audition, and 80 percent of the cast consists of individuals Smith has never worked with before.

“This one appeals to those girls who haven’t made theater a priority in their life, but they love it and they have an appreciation for it,” Smith said. … “It’s fun to feature new talent around here.”

And the new talent have caught the rhythm and the message of the musical. Smith was first exposed to “Sister Act” when he shadowed a director in West Valley for the show. At the time, he was impressed with how a cast, which is stereotypically associated with drama, could be completely supportive of one another. The same sisterhood has been evident in the SCERA’s production.

“I’ve already experienced the same thing with our cast where every night there is just this overwhelming feeling of love and support for each other and this feeling of family,” Smith said.

The cast’s behavior behind closed curtains perfectly mirrors the purpose of the musical — spreading love.

“It’s about finding a family and finding a reason to help other people,” Smith said. “It’s cool to see that from the story bleed into these real people in the backstage parts of the show.”

And the message of family and love is something that any community with strong religious ties, just like Utah County, can appreciate.

“I think it is a message that people need to be reminded of, specifically religious backgrounds, in the fact that sometimes we forget that some of the basic, most important doctrines of religious is to love one another despite their backgrounds and beliefs or personality.”

Despite its religious themes, “Sister Act” is a a vibrant musical complete with laughter.

“Because it is a little more tongue-in-cheek and glitzy, it forces the audience to be more open minded and laugh at the things that are happening,” Smith said. “That’s just religion and family, which I think is great for people around here. Let’s focus more on the people rather than the letter of law that we live. Let’s focus on the uniqueness of the individuals and celebrate that.”

“Sister Act” includes music by award-winning musician Alan Menken, who is best known for his work for Disney, including “Aladdin,” “Beauty and the Beast” and more. However, unlike his Disney musical scores, the music for “Sister Act” has disco-inspired music from the ’70s.

“That’s not something you usually hear from Alan Menken,” Smith said. “A lot of people come and they don’t realize it is Alan Menken. With our concept for the show, we wanted to dive into that stereotypical late ’70s feel and look just because the script feels a little tongue-in-cheek anyway.”

Breanne Schow, who just finished her master’s degree in London as a vocal performance major, plays Mother Superior who tries to maintain order and deal with Deloris, performed by Becca Rose, who has played the role before. Other actors include Rebecca Soelberg as Sister Mary Robert, Randilee Warner as Sister Mary Patrick, Shannon Follette as Sister Mary Lazarus, James Murphy as Curtis, Kyle Baugh as Eddie, and Aaron Evensen as Monsignor.