Travis Hansen, right, talks to a kid on a trip for his nonprofit organization, Sunshine Heroes Foundation, which helps children throughout the world by providing health care, education and access to clean water. (Photo courtesy of Sunshine Hero Foundation)

Travis Hansen made a name for himself on the basketball court.

These days, though, a surfing term best describes his accomplishments in business and charity work.

Hansen starred at BYU (2000-03) before embarking on a professional hoops career, including a stint with the NBA’s Atlanta Hawks. He also played for eight years in the EuroLeague in Spain and Russia.

That’s where the roots of his current pursuits began. While playing pro basketball, he and his wife, LaRee, incurred infertility problems.

“We dreamed of having a big family,” Travis recalled. “During that process my wife was reading in Matthew, ‘My yoke is easy and my burden is light.’ She decided to stop thinking about herself and focus on others.”

That focus led to the Hansens to create a nonprofit called Sunshine Heroes Foundation, which helps children throughout the world by providing health care, education and access to clean water. There are children’s centers in the Dominican Republic, Panama, Nicaragua, Thailand, China, Nepal, Mali and Russia.

“We’ve got a lot of help. We’ve partnered with a lot of great people,” Hansen said. “The government in those countries has to donate the land, they have to have the right people on the ground, locals who are bought in, are smart and have integrity and energy. We’ll come in and build a children’s center. It’s based on local needs but typically it’s a health clinic, a school, a playground and a library.”

To help provide funding for the children’s centers, the Hansens established a private equity company they named Tesani Capital.

“Tesani means a break in the wave,” Hansen explained. “One of our hobbies is to go to the beach in California to go surfing, which is 99 percent paddling, one percent surfing. That one percent is what a Tesani is to us. Ninety-nine percent of the time in life you’re working. Surfing is an experience, a paycheck, something you learn, a great moment you’ll never forget. That’s what we call a Tesani.” 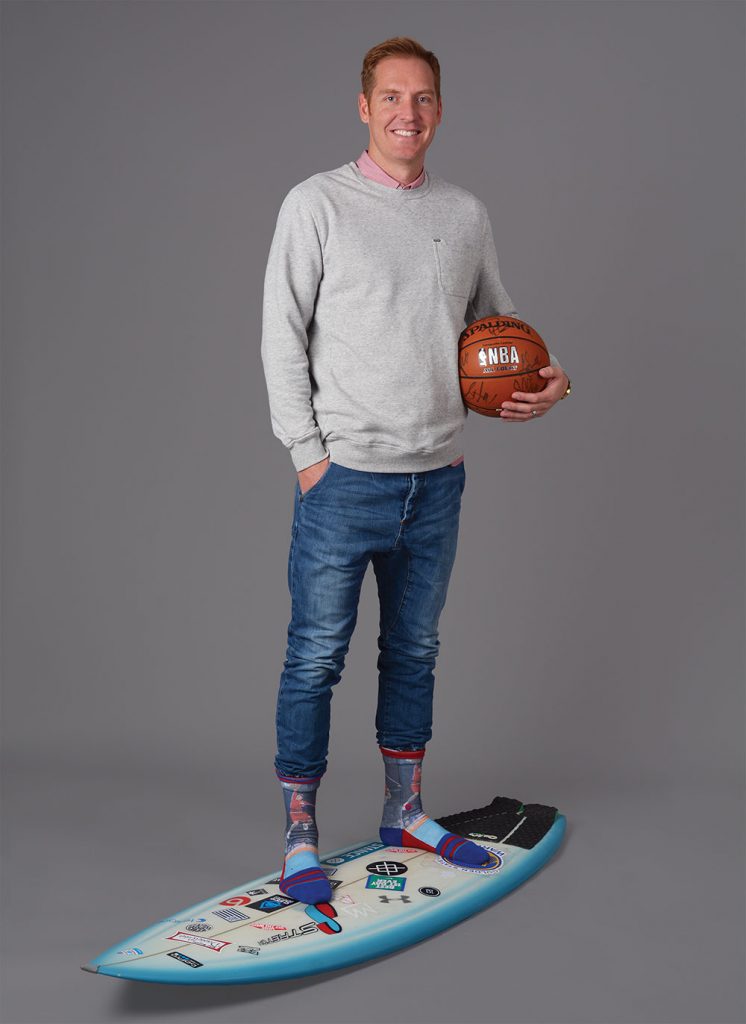 “We are building software that allows companies to be great places to work, to be enduring companies. The first piece of that is HR,” Hansen said. “It’s the most important part of great companies. It’s recruiting good people and being a gatekeeper of who comes into your company. We have over 100 employees. We built a great company with a great culture. This software will allow others to do the same. The problem with the tech field is it’s so competitive. But we’re not a start-up. We’ve been doing this a long time. I started building businesses — real estate, property management and finance — and now we’re into tech.”

“You can change people’s lives,” he said. “They’ve done really well. It’s been really hard but it’s a fun ride.”

Kind of like the exhilaration he feels riding a big wave.

The Hansens are now the parents of four children and they enjoy taking their kids to places all over the world to assist other children who are less fortunate or poverty stricken.

Originally, the Sunshine Heroes Foundation was known as Little Heroes Foundation. But ten years ago, when Nature’s Sunshine, a $400 million company, became a founding sponsor, that provided more opportunities to expand the Hansen’s reach.

“We became full-fledged philanthropists whether we wanted to or not,” Hansen said. “Nature’s Sunshine had really big resources. We have a 10-year partnership with them and it’s allowed us to have quite a bit of resources to continue to build children’s centers around the world. We’ve learned a lot and we’ve gotten a lot better.”

Along the way, Hansen has consulted with one of his good friends, Blake Roney, the CEO of NuSkin.

“Blake told me that charitable work is mission-driven and it’s really hard to measure your impact,” Hansen said. “You work with people and you try to build the culture. Those in the organization take on the personality of the leader.”

For his work with Sunshine Heroes, Hansen was bestowed the 2015 Distinguished Alumni Award by BYU.

That’s not the only honor that Hansen has received. A couple of years ago, Orem Junior High retired his jersey, a tribute that touched him deeply.

“That was one of the greatest moments of my life,” he said. “The band was there and so was the mayor. Initially, they had duct-taped my jersey on the wall. It was of my greatest moments because that’s where I came from. I never thought my junior high would put my jersey on the wall. I think it symbolizes that if you have dreams but you’re a doer more than a dreamer, you can make things happen. You have to work really hard. When you work hard, good things happen and sometimes great things happen. I’m in awe of the incredible things that have happened in my life.”

While many know Travis Hansen for what he did in basketball, he is becoming known for what he is doing in business.

“My wife always reminds me to give credit to Heavenly Father,” he said. “He’s blessed us and we in turn need to bless others. That’s what life is all about.”