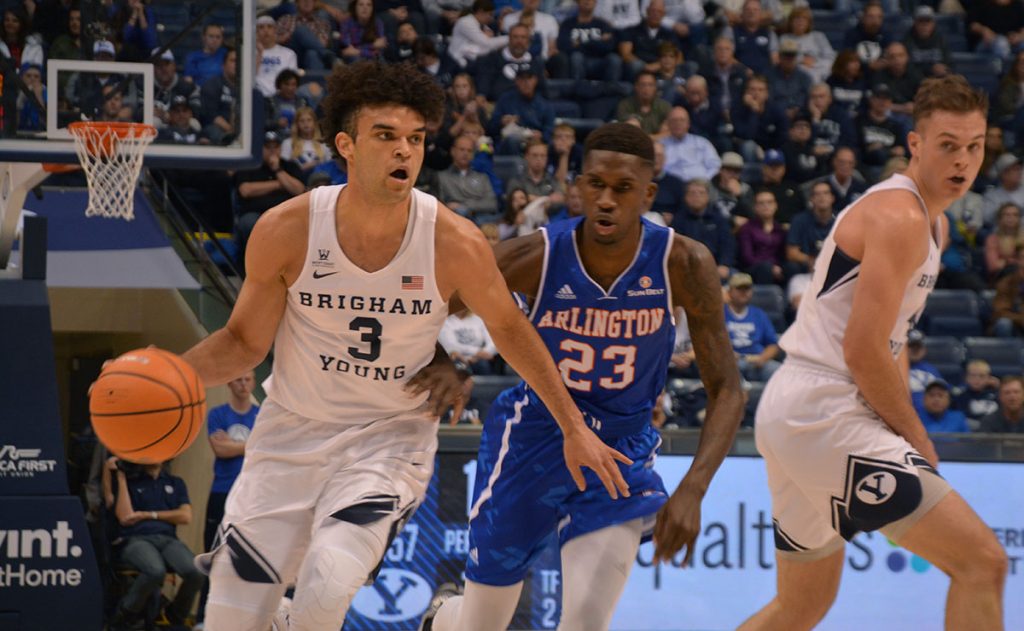 BYU junior Elijah Bryant drives to the basket in a game against UT Arlington. Bryant is the Cougars leading 3-point shooter. (Photo by Rebecca Lane)

“As a little kid, it was always my dream to play in the NBA,” Bryant said in a YouTube video. “And now is my opportunity to fulfill that dream. I am honored to say that I have graduated from BYU and look forward to connecting more dots with great people around the world.”

While Bryant had three options to advance his basketball career for the upcoming season — stay at BYU, transfer to another university as a graduate student or pursue a professional basketball career — he chose to chase his childhood dream.

“Basketball has always been my first love,” Bryant said in the video. “It’s brought me so many memories and taken me so many places.”

Bryant, who transferred to BYU from Elon College in 2015,  redshirted during the 2015–16 season. During the 2016–17, Bryant started nine games, but was kept from playing during the majority of the season from a knee injury.

In his junior season, Bryant was a team captain that led BYU with 18.2 points per game. He shot 85 percent from the free-throw line.

This is the second season in a row that BYU basketball has lost its top scorer to professional basketball. Following the 2016–17 season, leading scorer Eric Mika entered the 2017 NBA Draft while maintaining eligibility. In May 2017, Mika officially entered the draft by hiring an agent; however, he went undrafted. Mika now plays for Consultinvest Pesaro in Italy.

SCERA announces 2019 summer season a year in advance Next post