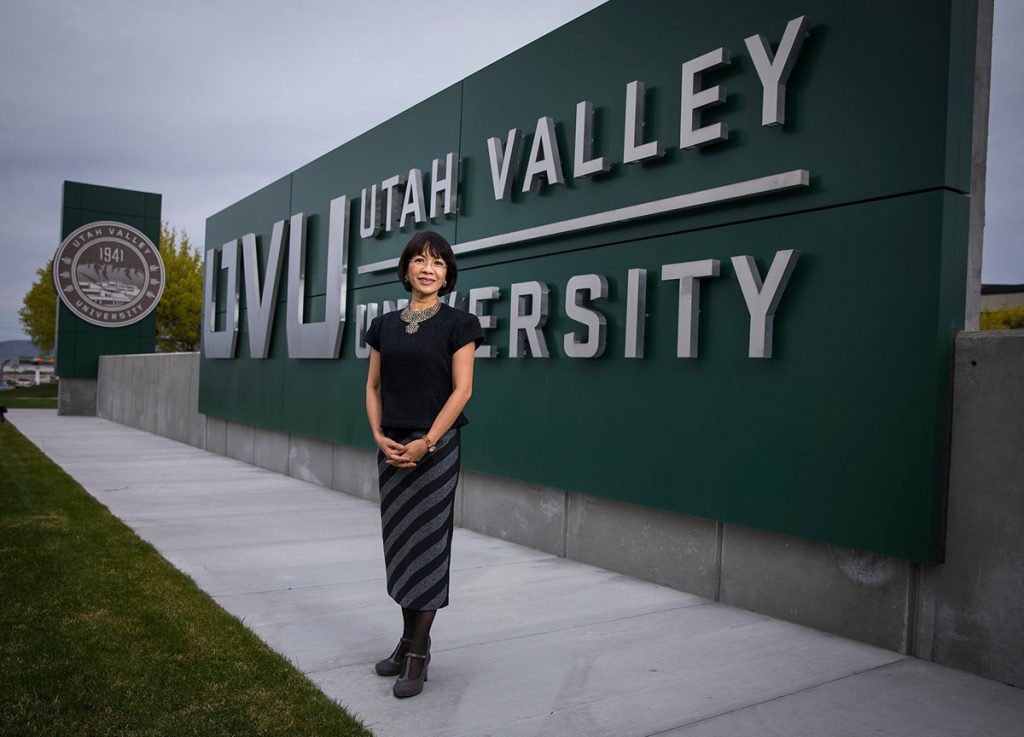 Utah Valley University has its first female president. The UVU Board of Regents named Astrid S. Tuminez the seventh president of the university on Friday evening.

“Her impressive accomplishments throughout her career, show she has the strength and ability to continue this university on its current upward trajectory,” said Daniel W. Campbell, chair of the Board of Regents. “We are so pleased that she accepted this responsibility.”

Tuminez is the Regional Director for Corporate, External and Legal Affairs in Southeast Asia for Microsoft. Her educational leadership background includes her time as Vice Dean of Research and Assistant Dean of Executive Education at the Lee Kuan Yew School of Public Policy at the National University of Singapore, where she trained over 2,000 government officials and private-sector professionals in leadership and organizational change. Tuminez holds a bachelor’s degree from Brigham Young University, a master’s degree from Harvard University, and a doctoral degree from the Massachusetts Institute of Technology.

“I feel a little overwhelmed at the moment,” Tuminez said. “I’m dazed and amazed and very humbled. I want to thank all of you.”

Tuminez will replace President Matthew Holland, who will leave the university in June to serve as a mission president in Raleigh, North Carolina for The Church of Jesus Christ of Latter-day Saints. President Holland has served as UVU’s president since 2009.

Looking to President Holland, Tuminez joked, “President, I don’t know if I’ll ever be able to fill your shoes,” which was a reference to their height difference. At 4-foot-11, Tuminez stepped around the podium to give her acceptance speech. After saying she might have seen President Holland as a young man walking around BYU campus — President Holland’s father, Jeffrey R. Holland, was president of BYU at the time Tuminez attended BYU — she thanked President Holland for his work at UVU.

“Thank you for the trust you have put in me. I will try to deserve it,” Tuminez said. Later she added, “I promised to work very hard. I hope I can count on all of you for your support because this is a very big job indeed.”

On Thursday, Tuminez was one of four finalists who participated in a question-and-answer session with students and community members. Speaking of the students, Tuminez said, “They are dynamic. They are inspired. They want to change the world.”

UVU’s Board of Regents have been looking for President Holland’s replacement since November 2017.