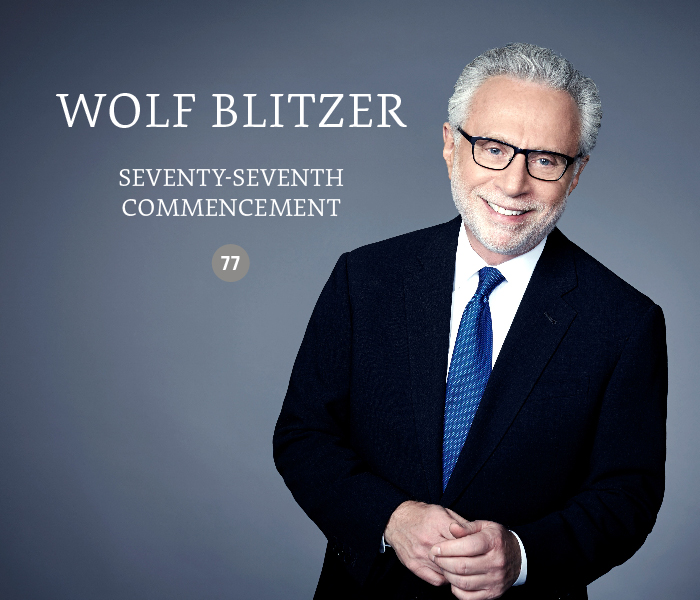 Wolf Blitzer is speaking at UVU’s commencement on Thursday, May 3.

Graduation season is in full-swing as UVU prepares for its 77th commencement on May 3, 2018 at the UCCU Center on the main Orem campus.

CNN Anchor Wolf Blitzer will give the keynote address. Blitzer is an award-winning lead political anchor and host of CNN’s “The Situation Room with Wolf Blitzer” and  “Wolf.” Over his 40-year career, Blitzer has interviewed U.S. presidents and world leaders, including former Prime Minister Margaret Thatcher and former South African President Nelson Mandela.

He also anchored CNN’s coverage during the presidential inaugurations of George W. Bush and Barack Obama. Blitzer was granted rare access to North Korea with former New Mexico Governor Bill Richardson and has reported from other various countries all over the world.

“By academic training and vast world experience Wolf Blitzer has developed an understanding of international events like few others in the nation,”  UVU President Matthew Holland, said in a press release. “In doing so, he stands as a remarkable example of what can be achieved by ‘engaged learning,’ which remains a hallmark of a UVU education.”

Blitzer, the Rev. France Davis of the Calvary Baptist Church; Stephanie Nielson, an author and speaker; and Jeffrey L. Sermon, the CEO of Utah Community Credit Union, will all receive honorary degrees from UVU during the commencement ceremonies.

Convocations for the university’s individual colleges and schools will be on Friday, May 4, 2018. Time and location of each event will vary depending each college and school.