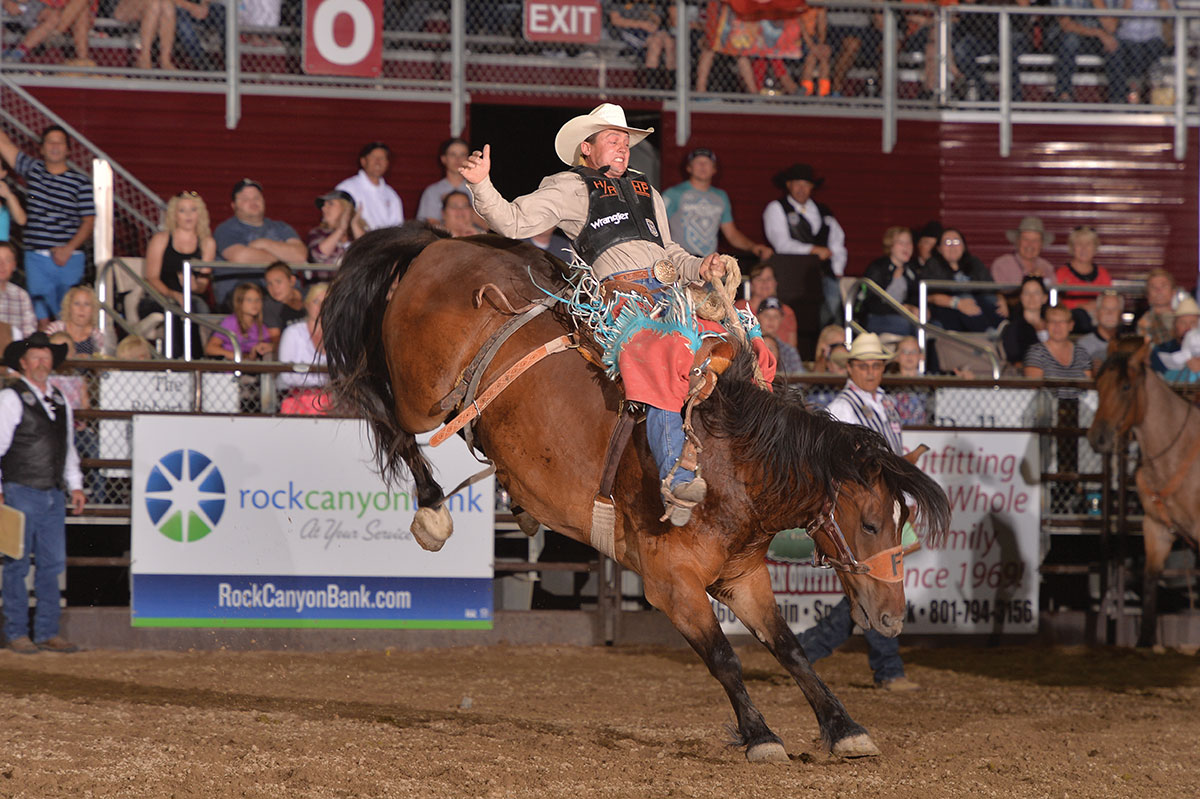 One hundred competitors participate in the Spanish Fork Fiesta Days Rodeo. However, only the Top 10 perform at night in front of the sold-out crowd. Competitors earn the nighttime slot by qualifying earlier in the day.

Cowboy posers and the real deal alike recognize the quality of Spanish Fork’s rodeo — which is why the Spanish Fork Fiesta Days Rodeo has once again lassoed the top spot for the best rodeo in the valley.

In 2012, Spanish Fork tore down the fairgrounds and built a new arena. Now this Spanish Fork venue can host 8,400 people a night, which is a good thing since the Spanish Fork Fiesta Days Rodeo has sold out for 52 consecutive performances over the past 13 years.

“The new arena has made a world of difference,” says Nick Hanks, Fairgrounds/Rodeo Division Manager. “I don’t think there’s a better rodeo in the country than right here in Spanish Fork.”

With stadium seating that surrounds the contestants, Nick says the design of the arena backs his claim, which makes it so there isn’t a bad seat in the house.

“Nowhere else is the noise or the fans all encompassing,” Nick says. “Usually you’re out in the middle of nowhere and there’s one grand stand and it’s open everywhere else. Our seats are built right to the edge of the arena, so the fans are almost right on top of the contestants, which makes for a fun atmosphere.”

Throughout the years, Spanish Fork has had boots across the nation riding their way to the fairgrounds. The Spanish Fork Fiesta Days Rodeo has earned many awards, and just last year it was named the Best Large Rodeo in Utah by the Professional Rodeo Cowboys Association.

But it’s not just the facility that makes Spanish Fork a destination rodeo. It’s the love and support from the city.

“From the very top of the city clear down to me, everyone is fully invested in having the best rodeo we can put on,” Nick says.

You better be quick out of the chute if you want tickets to this rodeo, especially the competition on July 24 — the Pioneer Day rodeo always sells out the fastest.

“People will want to get tickets early or they’ll be left outside,” Nick warns.

Berry good: The view from the chair of Strawberry Days chair Next post