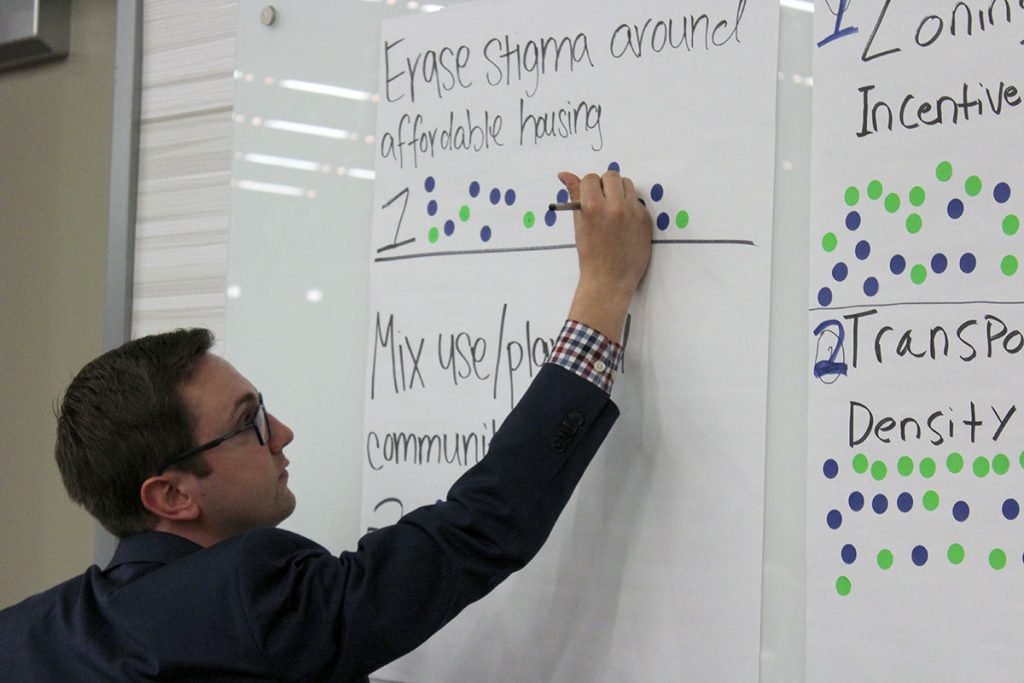 After attendees voted on their priority action items with blue and green dots, the votes were tallied by a team at the Valley Visioning Summit on Tuesday. (Photo by Rebecca Lane/UV360)

Education, housing and transportation — these three Utah County issues were the main topics of discussion at the first annual Valley Visioning Summit.

Multiple chambers of commerce in the valley invited businesses, education, government and nonprofit organizations to meet together, learn more about the top issues and brainstorm ideas on how their varying organizations could collaborate to solve some of these problems. Together the group looked to the future to help create an ideal vision for Utah Valley in the next 10–50 years, which included voting on priority projects at the conclusion of the summit.

“For as strong as Utah County is, we aren’t nearly anywhere we ought to be in exercising our influence and being able to accomplish what we can,” Hale challenged. “I look at other areas of the state, especially on the legislative level, and they’re much more organized than we are.”

“This visioning summit is a great first step,” Hale said. “If we don’t do it, we’re going to get behind fast. We just can’t stick our heads in the sand and say, ‘It’s going to be fine,’ because it’s not. It’s coming. It’s  a huge tsunami. If we all new a tsunami was on the beach and we were on the beach, we’d do something about it. That’s what we need to do now. … Where there is no vision, people perish.”

The Valley Visioning Summit, which will take place in April in future years, created a plan to turn discussion items into action items. Following the summit, organizations will be assigned to tackle the key priorities summit attendees voted on. Then the action items are broken into three phases: (1) prepare for town halls, (2) hold town halls, and (3) align feedback with initiative strategy.

“We will hold ourselves accountable over the next year,” said Jim Mortenson, who moderated the event.

Here is a summary of some of the discussion and the three top-voted priorities out of each category: 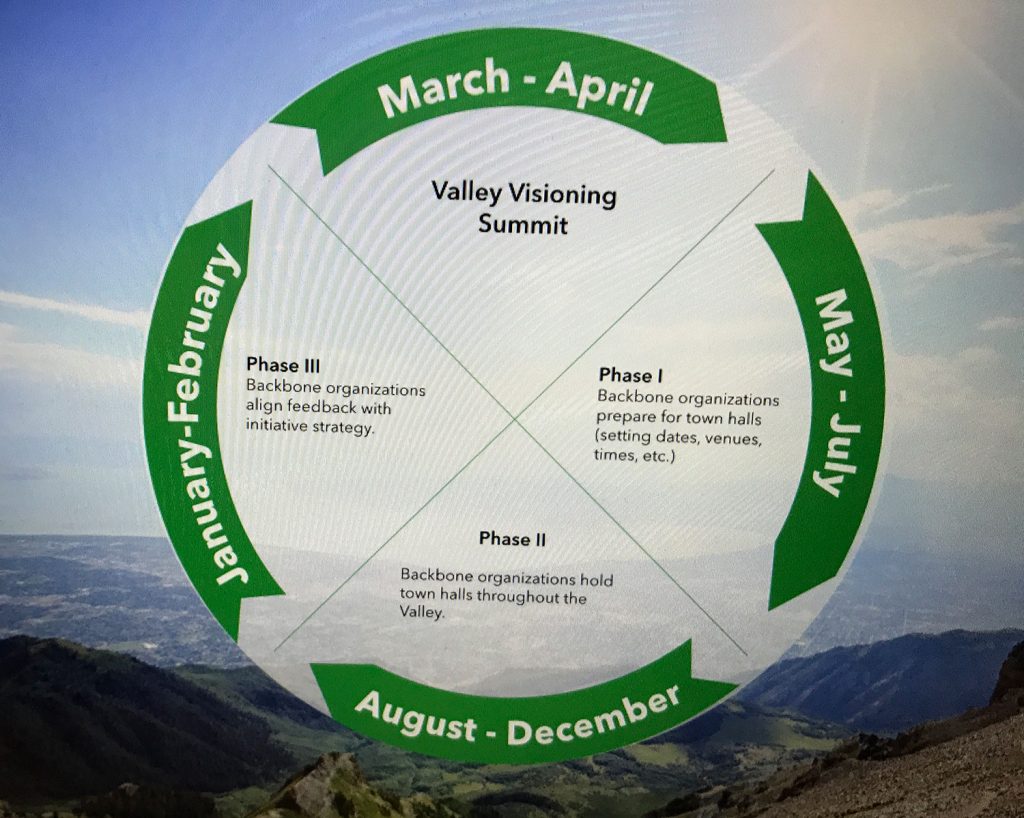 The Valley Visioning Summit was used to brainstorm solutions to Utah County’s biggest issues. Following the summit, teams will be put together and work in three phases. (Image courtesy of Utah Valley Chamber of Commerce)

Education and the workforce

Teacher shortages, building shortages and school safety are at the top of Alpine School District’s priority list, according to Rob Smith, Alpine School District assistant superintendent. There aren’t enough teachers to fill open teaching positions, and once the school district has teachers, it has a difficult time retaining the teachers. Then there isn’t space for all of the students. However, there is currently $230 million in school construction problems underway.

“A lot is going on and there’s a lot more we need to do,” Smith said.

Meanwhile the workforce, especially in the tech industry, is going really well, according to Clint Betts, Silicon Slopes executive director. However, businesses are struggling to fill all the open positions.

“There isn’t enough talent in Utah to fill all the jobs that exist,” Betts said.

Through voting, attendees voted they wanted to focus its educational/workforce efforts on:

Abby Osborne, vice president of government relations with the Salt Lake Chamber, laid the foundation for the discussion on affordable housing. Siting research from Kem C. Gardner, Osborne pointed out that the last decade has shown a rise to where there are more households than housing units. This disparity has happened for multiple reasons, including housing shortages, local zoning ordinances, land costs and more.

“Think of these communities: San Francisco, San Jose and Seattle,” Osborne, who also works with the Housing Gap Coalition, said. “We’re on a faster trajectory than those three communities.”

Osborne shared that 1 in 8 of Utah homeowners are severally cost burdened in housing expenses, which means they spend 50 percent or more of their income on housing. And it could get worse.

“We’ve got to find solutions now, and we’ve got to work together,” Vernon said.

Much of the discussion by attendees included addressing the cultural issue with high density housing. The voting on affordable housing yielding the top three priorities as:

Utah County is looking to fix its current traffic problems — and hopefully prevent a major growth in traffic problems in the future — with public transportation and installing more of a grid system in Utah County. Part of the solution is getting more east-west connecting roads. One current project addressing the east-west connectors is the Bus Rapid Transit system, which is set to open on Aug. 13, in Provo and Orem.

“I think it will be one of the signature projects in Utah County over the next several years,” said Shane Marshall, deputy director at UDOT. … “This just has to work because there are no other east-west connectors in Utah County.”

Transportation solutions will help with air quality, a problem difficult for Utah County to escape because of how it is positioned between mountains.

The attendees main focuses following the transportation discussion include: