Provo council: We don’t have enough info about Bulldog project 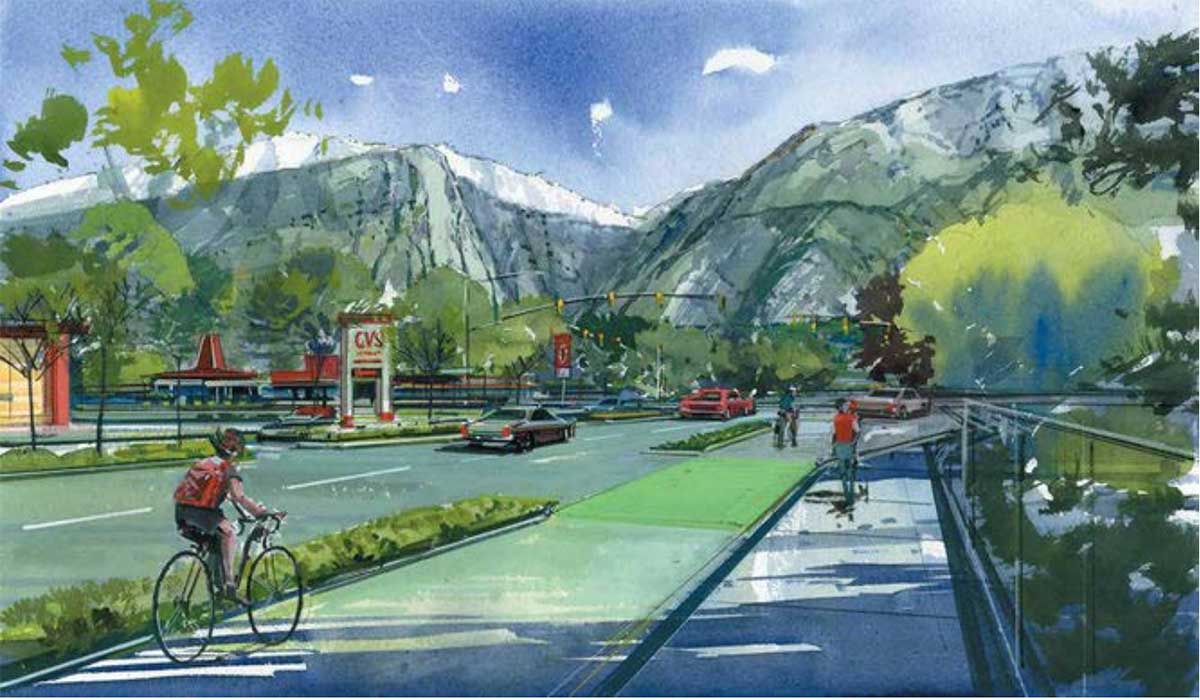 A rendering of the proposed bike lane additions on Bulldog Blvd. (Rendering courtesy of Provo City)

Provo city officials started a discussion about redesigning Bulldog Boulevard in 2013, did studies in 2014 and 2017 to see how changes would affect traffic flow, and started the design process. Now the design is nearly done and scheduled to be finalized this month. Funding for the $4.5 million project is set and the city’s taking public comment. And crews will start construction early next year. The problem? The current Provo Municipal Council knows little about the project and some are concerned about the proposed design.

The plan is to reduce traffic lanes from three to two in order to add a protected bicycle lane. This will keep bikes off the sidewalks to keep pedestrians safe, and protect cyclists from cars. The city will add a traffic signal at 400 West for easier access into the Riverside Plaza, where Target is opening later this year. Crews will add raised medians, which they will landscape in some places. And drivers will only be able to make left turns and U-turns at intersections with traffic lights. So the city will adjust light cycles to accommodate the change in traffic patterns. And though the city’s reducing vehicle lanes and turning patterns, the studies show commute times will only increase by four seconds. City staff expects the construction to take four to five months.

A concept plan for construction on 300 West and Freedom Blvd. (Rendering courtesy of Provo City)

But the last time the city council had a discussion about redesigning Bulldog Boulevard was more than two years ago.

Councilman George Stewart said during a work session on Tuesday that the staff hasn’t engaged the city council in the Bulldog discussion. And he hasn’t had a chance to see the project since 2014 or 2015. “Something doesn’t compute with me on this.”

Councilman David Sewell said he thinks the city hasn’t done a good job about informing residents about the project. The city has held one public hearing on the issue, at Provo High School on May 21. And a public comment period is open until Friday, June 8. Mayor Michelle Kaufusi has written about the project on her blog.

“I don’t see how we can go ahead with this, with so little public input, a month from now,” Stewart said. Also, the council doesn’t have enough information.

“I think we need to understand this ourselves,” Stewart said. “I’m not there yet.”

City Engineer Dave Graves said the redesign will increase safety. But Stewart said he isn’t convinced on the safety issues yet.

Graves said Bulldog’s accident rate is 7.5 times higher than the state average on multi-lane arterial streets. So engineers focused the design on making the road safer for vehicle drivers, cyclists and pedestrians.

Stewart said he wants to see more information about the accident statistics. Other roads in Provo seem to have more accidents than Bulldog, like University Avenue.

The council agreed to schedule another meeting about the Bulldog project as soon as possible, but hasn’t set a date yet. For more information about the project or to comment, go here.