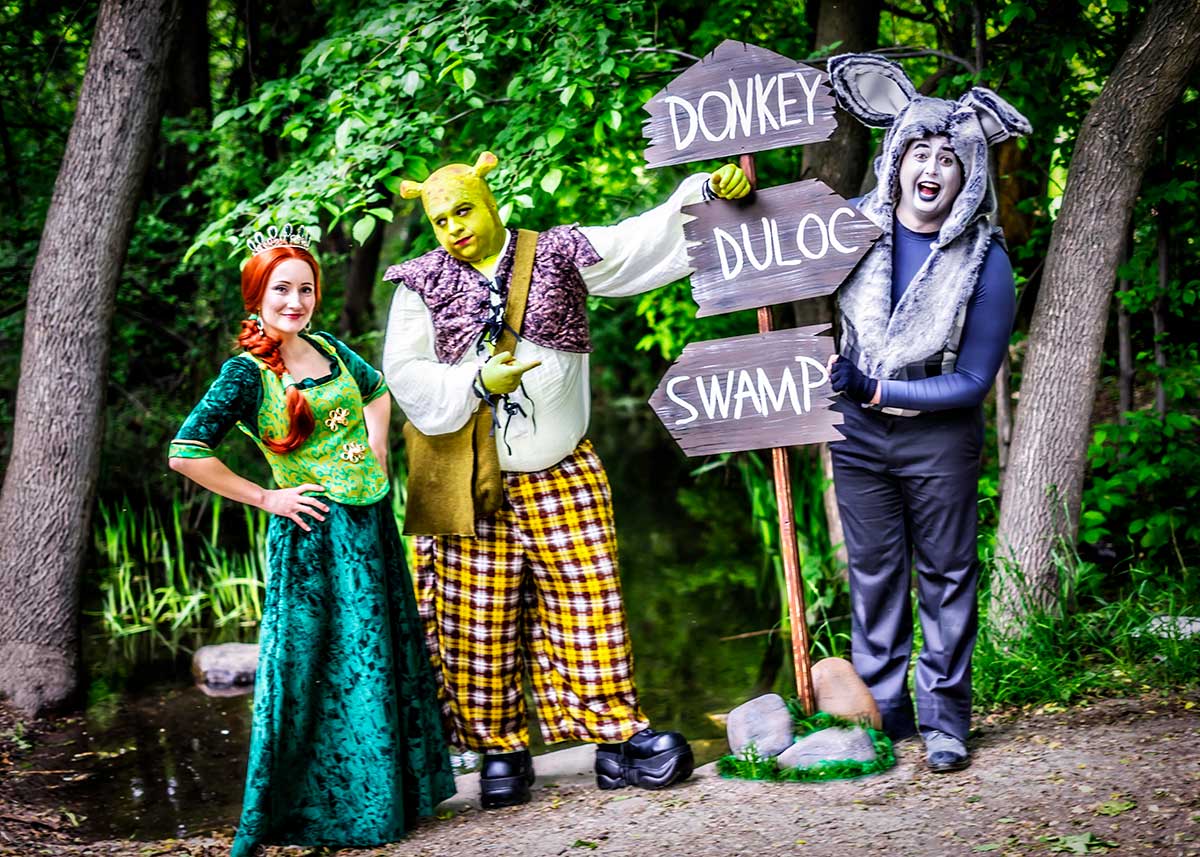 Brittney Wallace is Princess Fiona, Kyle Baugh is Shrek, and Josh Needles is Donkey in the SCERA Shell Outdoor Theatre’s production of “Shrek: The Musical.” (Photo by Rachael Gibson)

It’s a swampy world out there and the SCERA Shell Outdoor Theatre is now living in it with “Shrek: The Musical.”

“Shrek,” a popular Dreamworks animated film from 2001, merges fairy tale worlds. When fairy tale creatures are exiled from Duloc by the evil Lord Farquard, the crew of misfits find an unlikely hero in an ogre, Shrek.

But instead of the stereotypically refined stories of “once upon a time” and “happily ever after,” Shrek takes to the swamp for a unpolished approach to problem solving with the childhood tales.

And now the SCERA is translating the animated feature to a stage production to open its 2018 outdoor season — which has proven a challenging task.

“Shrek” is a tale that requires magic. And magic, in reality, requires money in the theatrical world. But community theater doesn’t have endless funds, so director Shawn Mortensen knew he had his work cut out for him.

Looking at the magical aspects he needed to create onstage, Mortensen knew the musical wouldn’t be complete without what he refers to as “million dollar elements,” stage presentations that typically cost a lot of money. He needed to breath life into a dragon on stage, cover a performer from head to toe in makeup, blow up birds and make a nose grow on Pinocchio.

“When you have millions and millions of dollars to throw at a show, that’s no problem, but when you don’t have quite that much, it gets a little tricky,” Mortensen said.

“It takes a lot of people,” Mortensen said. “The production staff has been awesome to work with. I’m fortunate enough that I work at the SCERA and we’re very closely knit and we all work very well together on any project we’re doing, especially this one.”

“We get pretty creative with material you wouldn’t typically think about using,” Mortensen said. “They use pool noodles in ways you would never think possible. It’s just crazy to me what we use.”

“Sometimes we have to get around those expensive things that are in there and still tell the story and still make the audience ooh and ahh.” — Shawn Mortensen, director

After all that hard work, Mortensen is most excited for the dragon reveal, saying it compares to his anticipation for people to see Ursula’s costume in the SCERA Shell’s production of “The Little Mermaid” a few summers ago. Besides the difficult task of staging, Mortensen said he truly is most excited for theater-goers to see the hard work his cast has put in to bring these animated characters to life, which Mortensen called a “daunting” assignment.

“They need to be enough like the cartoons that it’s believable but still have enough of themselves in there that it makes it interesting so you don’t feel like like you could have stayed home and watched this on Netflix,” Mortensen said.

But after working with the actors, Mortensen believes the cast will do the film and its fans justice.

“I’m very excited for people to see Shrek because there is a lot of work that goes into taking these actors and turning them into the character,” Mortensen said. “I’m excited for them to see him and react to him because he is so great in the role.” 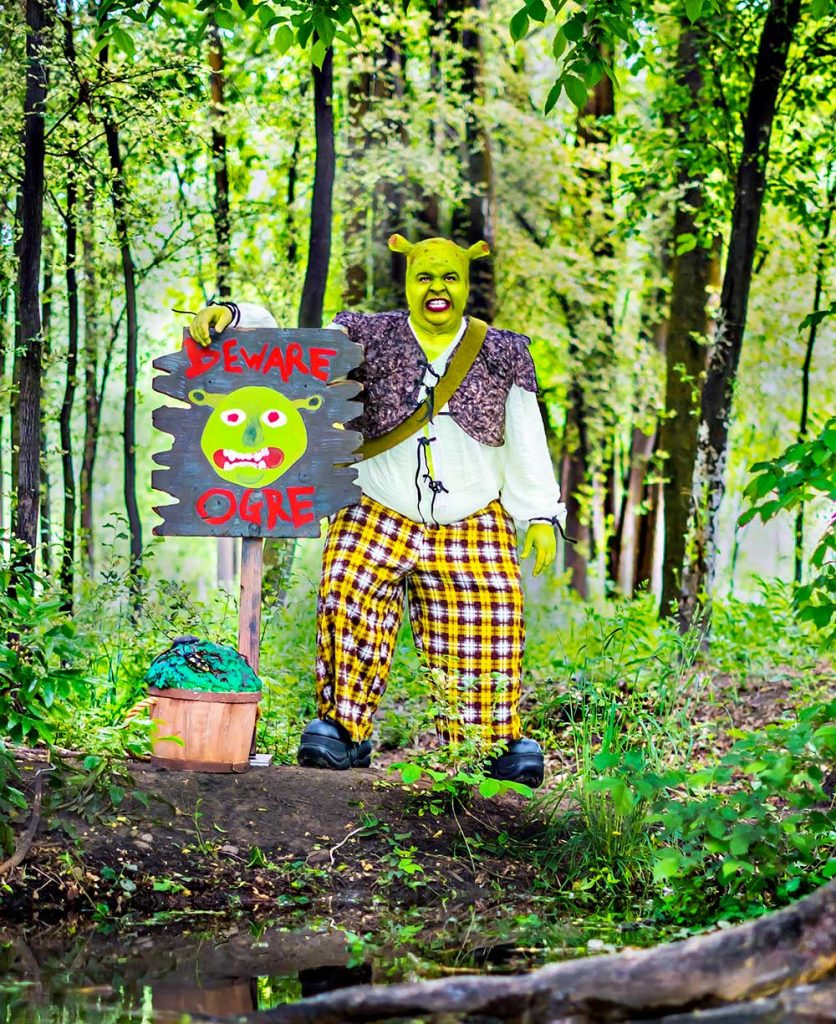 Kyle Baugh plays Shrek. His costume and makeup includes waterbase makeup, latex to stick to face and airbrushing. It takes him about an hour and a half to get into his costume. (Photo by Rachael Gibson)

Kyle Baugh, who has starred the last two seasons as Horton The Elephant in “Seussical” and Sebastian in “The Little Mermaid,” plays Shrek. And he says becoming the anti-social ogre was a challenge, and its not just because it takes him an hour and a half to get into his costume and get his makeup done for the show.

“You want to make sure people are still seeing Shrek and that they are seeing the character they know and love while at the same time trying not to imitate the other actors,” Baugh said. “It was a process to try and figure out where to let Kyle in and where I needed to stick to the character.”

To prepare, Baugh spent a lot of time mastering his Scottish accent. He studied a book on stage accents, got advice from former professors, learned how the letters and sounds vary in Scottish and adjusted his posture. And he found techniques that work.

“If I protrude my jaw a little forward, and brace my tongue against my molars, it is a little easier for me to slip into my Scottish accent,” Baugh said.

Rounding out the cast is Brittney Wallace as Fiona and Josh Needles as Donkey. Plus, more fairy tale misfits, such as the Big Bad Wolf, Pinocchio, The Three Bears, Three Blind Mice and others, will make you a believer.

“Shrek The Musical” opens June 8 and continue through June 23 on Mondays, Tuesdays, Thursdays, Fridays and Saturdays at SCERA Shell Outdoor Theatre in Orem, Utah. The show begins at 8 p.m. each night. Tickets cost $10–$14 for children and $12–$16 for adults. Learn more about the musical at scera.org.