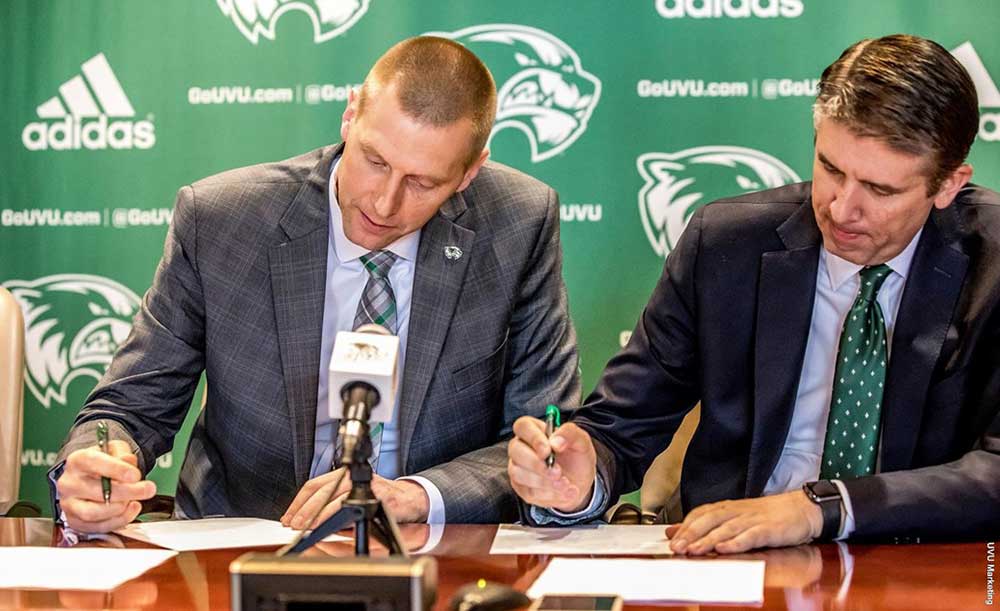 Utah Valley University basketball coach Mark Pope signed a six-year contract with the university on Thursday. The new contract, which will keep Pope at UVU through the 2023–24 season, replaces the previous five-year contract that would expire in 2020.

“We’ve got some real momentum going at Utah Valley University and in our athletic department because of what men’s basketball has been able to accomplish these past three years,” said Vince Otoupal, UVU athletics director. “Coach still had two years remaining on his contract but we wanted to be aggressive because he’s the guy that we believe will continue to move us forward. We’re taking every step that is necessary to take our athletic department to the next level.”

During his first three years with the program, Pope has led the men’s basketball to two straight appearances in the College Basketball Invitational. In the 2017–18 season, Pope and his team made Wolverine history with a school-record 23 wins and the best end-of-season KenPom.com ranking in UVU history (No. 91). Also during the 2017–18 season, Pope garnered national attention with the Toughest 24, where Pope scheduled two Top 25 teams in a 24-hour period.

Pope was also instrumental in helping UVU get the NUVI Basketball Center constructed and completed in 2017. He helped raise the funds for the 14,500-square-foot building, which is the practice and conditioning facility for both the men’s and women’s basketball teams.

“This is a really special day for me because my whole heart is here at Utah Valley University,” said Pope. … “I love this place and this is where I want to be. Over the course of the last three years, Lee Ann and I have fallen absolutely in love with this university and its unique mission. We love the students and the administrators and faculty here. We’re really proud of what we have accomplished over the last three years but this contract signifies what we really deep down believe that we’re barely scratching the surface of what can be accomplished here.”