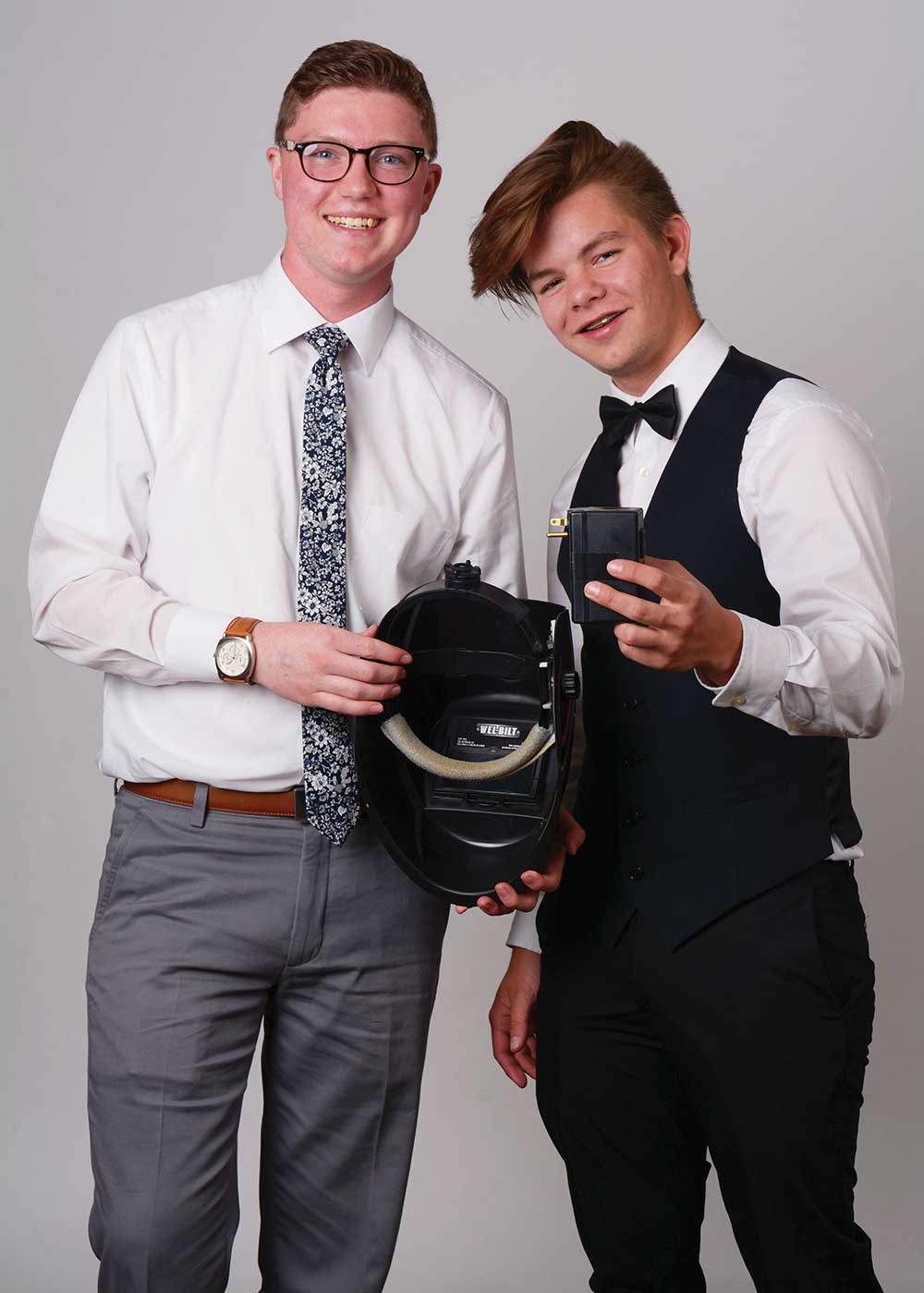 Tate Hertzler (left) and Josh Bosley of Saratoga Springs are the bright minds behind WeldSmart. In addition to being inventive, Hertzler and Bosley are like any other teenagers. Hertzler is a Spikeball fanatic and Bosley loves music and driving. “No joke, if coding and entrepreneurial stuff doesn’t work out, I think I’ll be a truck driver,” Bosley says. (Photo by Dave Blackhurst/UVBizQ)

Westlake High School grads Tate Hertzler and Josh Bosley are the duo behind WeldSmart, a welding mask modification that prevents arc flash. Arc flash occurs when the naked eye is exposed to bright ultraviolet light in welding. This exposure can burn the eye’s cornea. Hertzler learned about this painful injury firsthand when he forgot to put his welding hood down in class and had inflamed, irritated eyes for days. The two did some research and learned the issue was common, and they sought out a way to prevent the eye-catching problem.

Hertzler and Bosley added sensors to a welding mask and programmed them to detect if the mask was in the correct position. If so, the welding machine powers up like normal. If the mask is not in the right place, a wireless signal prevents it from powering up. Problem solved! “It’s a basic safety feature that makes a huge impact, especially for students who are new to welding and have a higher risk of getting arc flash,” Hertzler explains.

Hertzler and Bosley have known each other since elementary school and became close friends at Westlake. Bosley brings technical skills to the table and Hertzler has business on the brain. Hertzler earned an associates degree from UVU while still in high school and plans on studying business at UVU and serving an LDS mission. Bosley is heading to USU where he wants to study computer engineering.

The duo’s invention earned the top prize at the 2018 High School Utah Entrepreneur Challenge Awards. They plan to use a large portion of their prize money to create an improved prototype. The inventors aim to do beta testing this summer and eventually market WeldSmart to schools and beginning welders. They are currently looking to work with professional welders/fabricators to get more feedback on their product.

The team had amazing mentors who helped them perfect their product. For starters, they needed a welding machine to test out their invention. One of Bosley’s neighbors, Keith Mecham, let him borrow one. Westlake High School teacher Melissa Yates helped the pair perfect their presentation. And you can’t forget about mom and dad. “Our parents actually paid for the first prototype we made, so thanks guys,” Bosley says. “Also, my mom gave birth to me, so write that down.”

UV BusinessQ Board: What’s the key to being an effective boss? Previous post