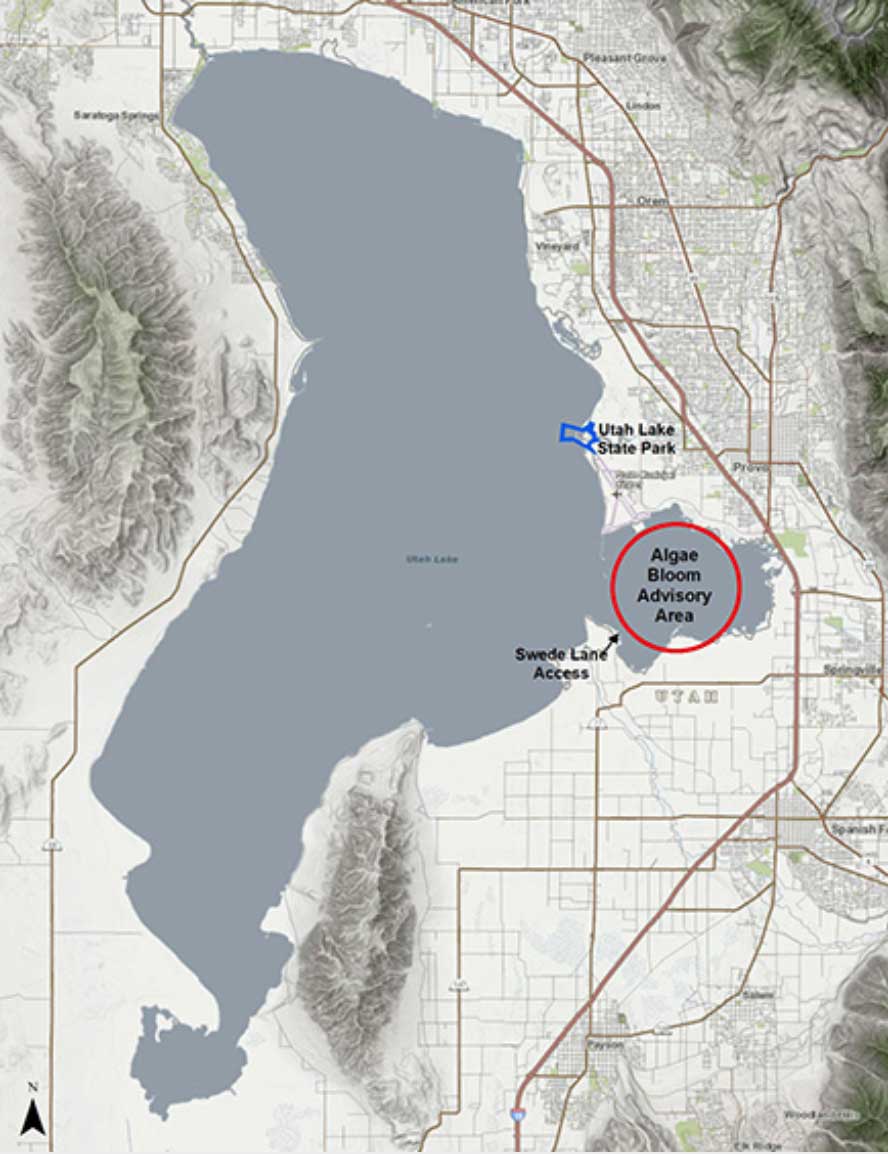 A new blue-green algal bloom has been detected in Utah Lake’s Provo Bay, the Utah County Health Department reported Tuesday. Because of the bloom, health officials are warning the public and their pets to stay out of the Provo Bay area of Utah Lake.

The Utah Department of Environmental Quality’s (DEQ) Division of Water Quality (DWQ) discovered the algal bloom after following up on a report on June 6. Professionals collect five samples in various locations and around the Swede Sportsman Access.

Those samples held algal species that have the potential to produce toxins, according to a press release from the Utah County Health Department.

“Sample results detected the presence of two cyanotoxins, anatoxin-a and microcystin, with one sample at the Swede Sportsman Access (5.5 micrograms per liter (ug/L) microcystin) exceeding the Utah Department of Health/Utah Department of Environmental Quality health-based threshold for recreational waters,” the Utah County Health Department reported in a press release. “All three samples sent to the lab for cell-count concentrations exceeded the health-based threshold, with cell counts ranging from approximately 400,000 cells per milliliter (cells/ml) to more than 21 million cells/ml. The cell count is an indication of harmful levels of cyanobacteria.”

Signs have been posted around Swede Sportsman Access near Provo Bay. Beginning June 11, DWQ will once again collect additional samples to follow the algal bloom’s progress.

“Utah Lake is a huge lake with many areas not currently affected,” says Eric Edwards, deputy director of Utah County Health Department. “We want those recreating to safely enjoy the lake and also make sure they are properly cautioned about the presence about potential harmful algal blooms in certain areas of the lake that can pose health risks.”

Algal blooms are caused by high level of nutrients in the water combined with warm weather, sunlight and calm water, according to the DEQ. Wastewater treatments are one of the largest nutrient contributors to Utah Lake followed by fertilizer runoff. These bright-green or blue-green blooms produce harmful toxins called cyanobacteria. Symptoms include headache, diarrhea, fever, abdominal pain, nausea, vomiting and skin rashes. Last year, an algal bloom in Utah Lake was first reported in July 2017.

Anyone concerned with exposure to Utah Lake’s algal bloom should contact their doctor of Utah Poison Control at (800) 222-1222. For concerns about animals, call their veterinarian. DEQ will continue to provide updated information at habs.utah.gov.