BYU receivers seeking to elevate their game in new offense 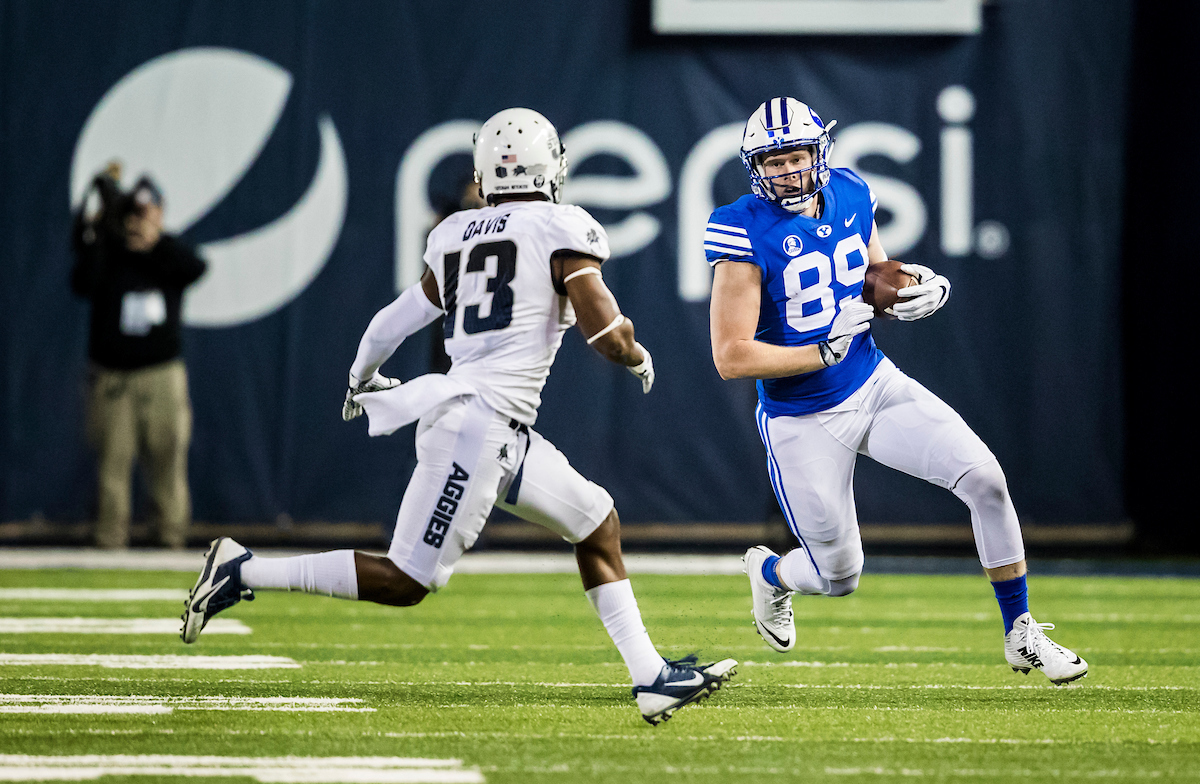 BYU’s Matt Bushman runs the ball in the Cougars’ 40–24 loss to Utah State during the 2017 season. Bushman led the Cougars in both catches (49) and receiving yards (520).
(Photo by Jaren Wilkey/BYU)

Things feel much different for Dylan Collie in his second stint at BYU.

Collie, a graduate transfer from Hawaii, is becoming a mentor to a group of receivers short on experience but long on potential. The senior definitely has plenty of wisdom to impart from his time with the Rainbows. But he has also learned an encouraging thing or two about his new teammates.

Once he got acquainted with the other receivers, Collie immediately grew confident about what the position group could accomplish in the season ahead. He thinks these receivers can measure up to standards set by predecessors on successful BYU teams in the past.

“It’s a hard working group and they are talented,” Collie said. “We’re going to surprise a lot of people this year. I got that impression as soon as I walked in.”

BYU definitely needs the receivers to take a few steps forward this season to help the offense rise from the ashes. The Cougars may have the right mix of experience and talent to achieve that goal.

[pullquote]“It’s a hard working group and they are talented. We’re going to surprise a lot of people this year. I got that impression as soon as I walked in.” — Dylan Collie, BYU receiver[/pullquote]

Aside from tight end Matt Bushman, the Cougars lacked a consistent pass-catching threat last season. Bushman led the Cougars in both catches (49) and receiving yards (520). Aleva Hifo and Micah Simon both showed playmaking potential, after combining for 823 yards and five touchdowns a year ago. Hifo and Simon also had limited impact at crucial times in multiple losses.

Bushman, Hifo and Simon all return and all three players will likely benefit from learning a new offense that promises to better utilize their individual strengths. Talon Shumway, Akile Davis, Neil Pau’u and Moroni Laulu-Pututau should all be in the mix to make major contributions as well.

BYU’s returning receivers have impressed the new offensive coaches with the progress they’ve shown across the board. The group is making strides in absorbing the new playbook.

“They’re really eager to just work and learn and understand the position at a deeper level,” receivers coach Fesi Sitake said. “I’ve been so pleased with the work ethic. I ask them to do something and they do it, which is rare across college football.”

Promising new receivers also create reasons for hope that things can turn out better in 2018. BYU has not had more than a single receiver surpass 500 receiving yards in each of the last two seasons. The talent joining the program offers the potential to keep such a trend from extending through a third season.

Collie offers an immediate upgrade at the position, given his track record at Hawaii.

During three seasons at with the Rainbows, Collie emerged as a go-to threat. He tallied 1,300 yards and nine touchdowns on 118 career receptions. His best production came in 2017 when Collie led Hawaii with 636 yards on 56 catches.

Younger teammates have already embraced his presence in the locker room and on the field.

“He’s already accepted a leadership role,” head coach Kalani Sitake said. “He’s already come in and really established himself as one of the leaders on our team. It’s like he’s always been there.”

Freshmen receivers Brayden Cosper and Gunner Romney could also make an immediate splash in their debut seasons. Both receivers are players that Fesi Sitake said “can win games” for BYU.

Having a variety of receivers available to use is perhaps the one attribute that gets coaches and players alike feeling optimistic about a looming uptick in offensive production. BYU can deploy a mix of receivers with good size and strength and receivers who can stretch the field with their speed. This means that whoever wins the quarterback job won’t lack targets to throw to when the season starts.

It offers hope for BYU that it can improve on offense and erase the memory of a season the program would like to forget. The Cougars fielded one of the worst offenses in the nation in multiple categories a year ago.

Coming and going: movies and shows on Netflix in July 2018 Next post