Home Sports BYU Quarterback vs. quarterback: who will lead BYU’s offense in 2018?

Quarterback vs. quarterback: who will lead BYU’s offense in 2018? 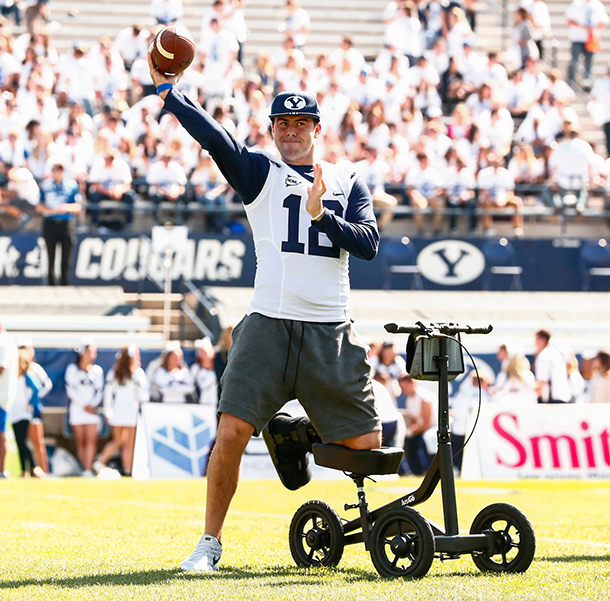 BYU quarterback Tanner Mangum had a season-ending Achilles tendon tear during the 2017 football season. Mangum didn’t participate in spring training, but he is expected to return by fall camp. (Photo by BYU Photo)

Injuries and ineffective play created a revolving door at quarterback for BYU last season. With a new offense in place, the Cougars hope to avoid a repeat scenario this fall.

The search for the right quarterback to run this new offense will extend into fall camp. BYU finished spring ball with several players making a case to be named the starting quarterback ahead of the season opener against Arizona.

BYU coaches confirmed that the evaluation process is still ongoing during the team’s annual media day in June. Such heated competition isn’t a negative thing in their eyes.

“Quite honestly, in the spring there were days that one guy performed better than the others, and then the very next day it was just the opposite,” BYU offensive coordinator Jeff Grimes said. “It’s not fortunate in the sense that it gives you a little bit of stability through the summer, but I don’t mind that because I think it’s positive for our team to see that we are demanding the same thing in our quarterback as our right guard or our slot receiver.”

If he is completely healthy by fall camp, Tanner Mangum has favorable odds for holding onto the starting job. Mangum already has the most experience of any quarterback in the program. Over three seasons, he has thrown for 5,158 yards, 34 touchdowns and 20 interceptions while completing 59.2 percent of his passes.

Mangum did not participate in spring ball while he continued to recover from an Achilles tendon injury. Still, he is already close to 100 percent according to quarterback coach Aaron Roderick.

His recovery has progressed better than expected. Mangum suffered his injury in the fourth quarter of a 20–13 loss to Fresno State in November. It marked the sixth time in the last eight seasons that a BYU quarterback suffered a season-ending injury.

At the time, Mangum’s injury posed the risk of closing the door on his uneven college football career. It can take from six months to a year to fully recover from an Achilles tendon tear. Mangum was out of his boot only after a couple of months. He started jogging again before the start of spring ball.

Such rapid progress has boosted his confidence going into fall camp. 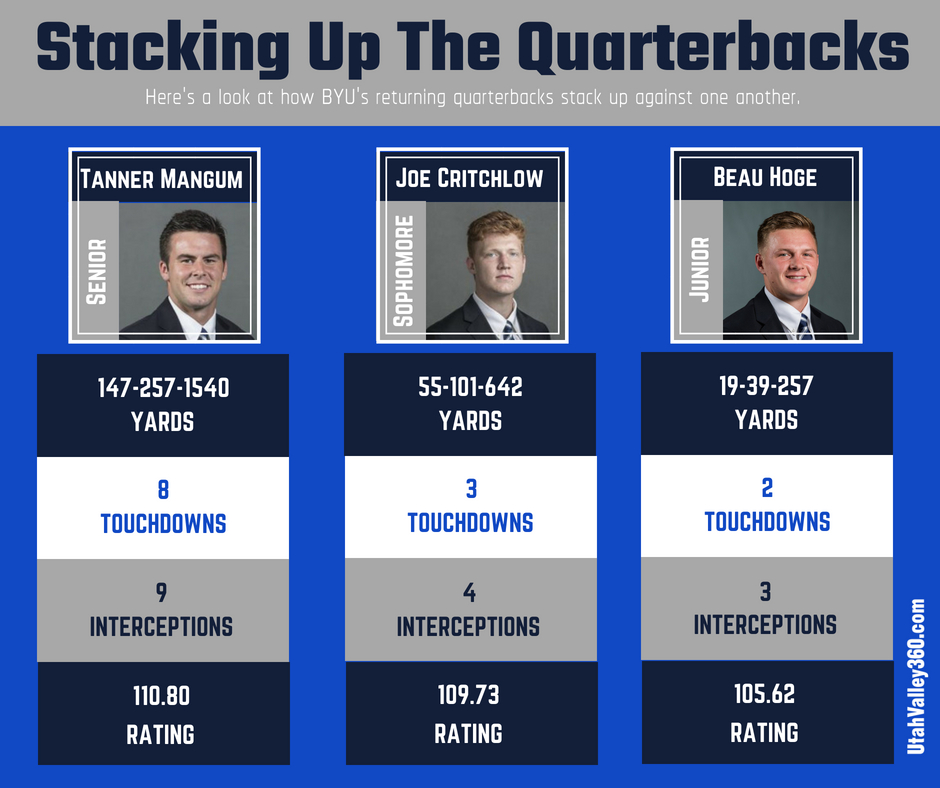 BYU faces a heated competition for starting quarterback going into fall camp. Senior quarterback Tanner Mangum figures to have the edge if 100 percent healthy, but returning quarterbacks Joe Critchlow and Beau Hoge are also in the mix for the top spot. Newcomer Zack Wilson and returned missionary Jaren Hall are also expected to make a push to move atop the depth chart. (Infograph by UV360)

Holding onto the starting job is far from a done deal, even if Mangum’s 100 percent.

Beau Hoge and Joe Critchlow both made starts last season while Mangum was sidelined. Each player is in the mix again this year. Critchlow posted a 2–1 record as a starter and tallied 642 yards and three touchdowns while completing 54.5 percent of his passes. Before injuries also sidelined him, Hoge made two starts and threw for 257 yards and two touchdowns.

True freshman Zack Wilson looked impressive during the reps he got in spring practices and could get a shot. BYU has not shied away from starting freshman quarterbacks in recent seasons. Jaren Hall will also be in the mix when he returns from his LDS mission and joins the Cougars for fall camp.

Head coach Kalani Sitake believes whoever earns the starting job is positioned to be more successful than any BYU quarterback was a year ago. Last season, the Cougars ranked 90th out of 130 FBS teams in passing offense (194.6 ypg).

“We have capable players and we have great coaches that know how to get the most out of their guys,” Sitake said. “I trust our coaches. I love the way they’ve been working with these young men. They’ve demanded quite a bit.”

Mangum has been through these battles before. He dueled with Taysom Hill for the starting job in 2016. Hill eventually won out and Mangum spent much of the season as his understudy.

Now, in his final season, Mangum welcomes the chance to prove himself against heated competition one more time. This is the third offense he’s had to learn in four years, but Mangum is confident he can succeed. He wants to show he can live up to the promise that he showed as a freshman in 2015.

“The main thing is just to compete against yourself,” Mangum said. “You can’t control what other guys do. You can’t control how other guys play. If you waste time worrying about what they’re doing, you end up shortchanging yourself. It’s just important to focus on what you can control: your play, your decisions and what you do on the field. That’s all you can control.”

OneRepublic, acrobats and stunts: 2018 Stadium of Fire had many tricks up its sleeves Previous post