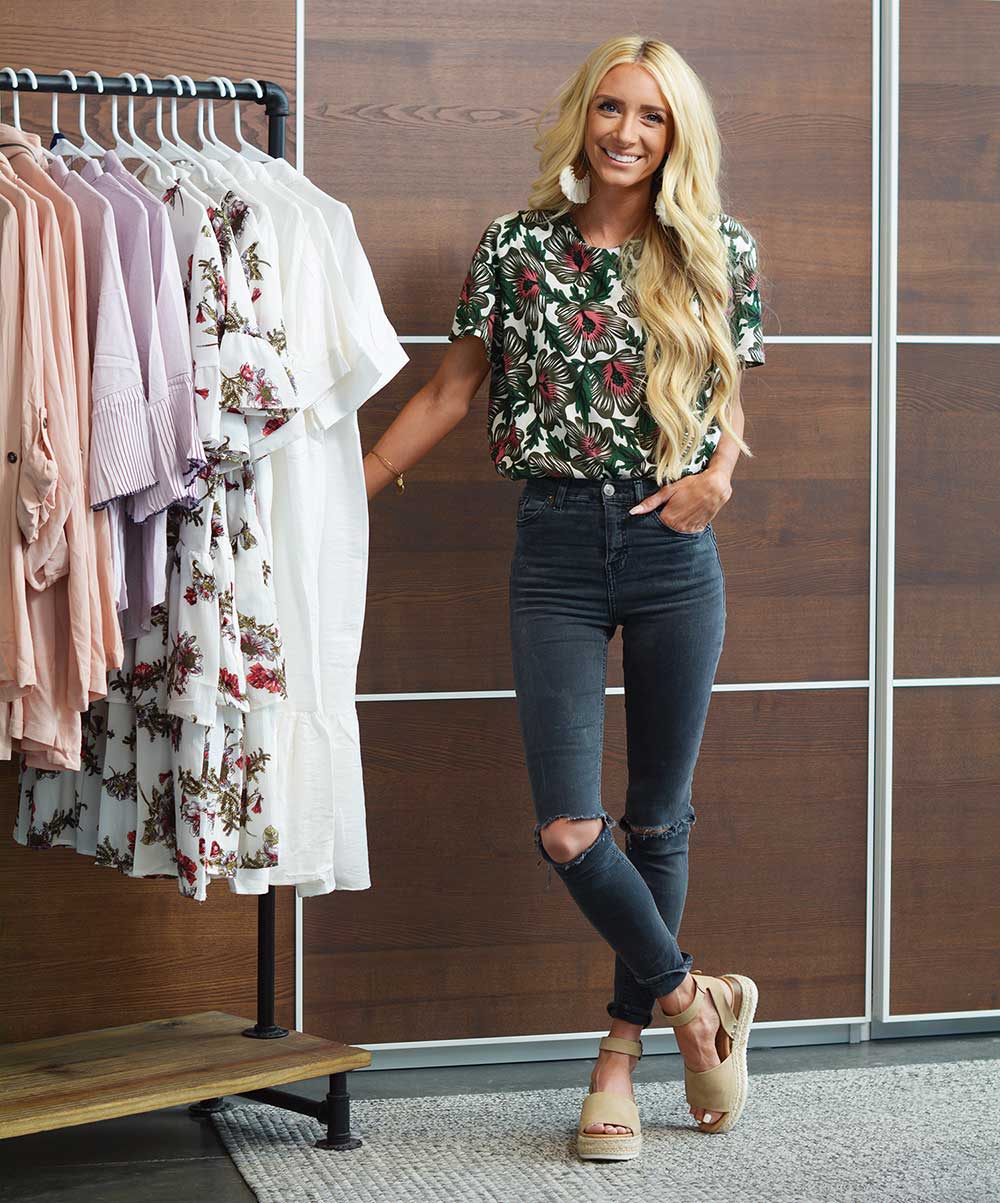 For Stevie, dressing well goes beyond the fabric. “I am a firm believer that when you feel comfortable and confident about yourself, then you’re no longer worried and self-conscience or thinking about yourself. You can go out and think about others,” Stevie says. “We just hope we can give that to women in a small way.” Stevie practices her stylish preaching: her pants and shoes in this photo are Shop Stevie styles. (Photo by Dave Blackhurst/UV Mag)

Stevie started a fashion blog in January 2015. A couple months into writing and posting, she and her husband, Trevor, decided to add a clothing business to the blog. They launched Stop Stevie two weeks later in March. This whirlwind process involved inventory overtaking the closet space in their basement apartment and them returning the new car they had just purchased.

“We had to make sacrifices, but it was worth it,” Stevie says.

In 2017, Stevie and Trevor moved the headquarters of Shop Stevie to a warehouse space in Vineyard. Since starting their company as a married duo, they’ve grown to more than 20 employees and over 70,000 followers on their company Instagram account.

Fashion is a passion for Stevie, but what calls most to her is being a mom to her two little girls — Aniston (2 years) and Zara (5 months).

“I never had a dream when I was younger to own a fashion boutique,” Stevie says, “I had the dream of being a mom.”

When Shop Stevie began advertising, this naturally shy Californian stepped into the lights and Stevie became the name and face of her boutique.

Stevie’s daughters love singing along with Disney’s Moana, and modeling has put Stevie in similar shoes as barefooted Moana.

“There is so much good that comes from social media, but sometimes people want you to fail,” Stevie says. “You just have to stand for what you know and what you believe, be a good person and do what’s right.”

“If the wind in my sail on the sea stays
behind me,
One day I’ll know.
If I go there’s just no telling how far I’ll go.”

“When everyone was telling her, ‘No, don’t do it,’ she knew what she was supposed to do,” Stevie says. “I hope my daughters always do that, too — that they always follow their gut even if people are pushing them to do certain things.”

Stevie’s first daughter was born after Shop Stevie, so the new mom had to fit business life into her new life as a mom.

“I had a lot of breakdowns,” Stevie says, “During one, I was nursing Aniston and there was a ton of work I needed to get done. Trevor said, ‘Steph, you can’t do what you used to do because you’re a mom now. Being a mom is the most important thing you can do today.’”

Aligning her perspective and being patient with herself has been key to this balancing act she calls life.

When the business started, Stevie’s inventory came from various vendors, but slowly she transitioned into designing. Without formal training, Stevie jumped into the world of swatches and samples. She borrowed pieces of designs she loved and combined them into expressions of her own style.

“Shop Stevie is an extension of my closet,” Stevie says. “Everything you see in the shop you see on me. It’s with my standards. It’s what I like to wear. It’s what I love.”

She especially loves designing swimwear because while growing up, Stevie struggled finding one piece swimsuits—let alone cute ones. Now she makes it a point to always have trendy one-piece swimsuits in her shop.

“My favorite thing is when I get a message from someone and they say, ‘I hate myself in a swimsuit, but I put this on, and I love it. I am dancing in it. I look so good,’” Stevie says. “That’s what keeps us going.”

The best way to rise above elementary teasing is to name your successful business after your childhood nickname.

Stevie’s given name is Stephanie. As a kid, she went by the nickname of Stevie after her father Steve, with whom she shares a family resemblance.

In grade school, another girl called Stevie “Stever Beaver” for having big teeth. To dodge the jokes, Stevie decided to start going by Stephanie.

“I thought, ‘I’m going to change my name so she can’t call me that anymore,’” Stevie says. “Looking back, I’m like, ‘I shouldn’t have done that.’”

Now she answers to both Stephanie and Stevie, and her online fashion boutique shares the nickname.

I Will Survive: Lani Sitake’s principles on love leave a legacy in local education Previous post