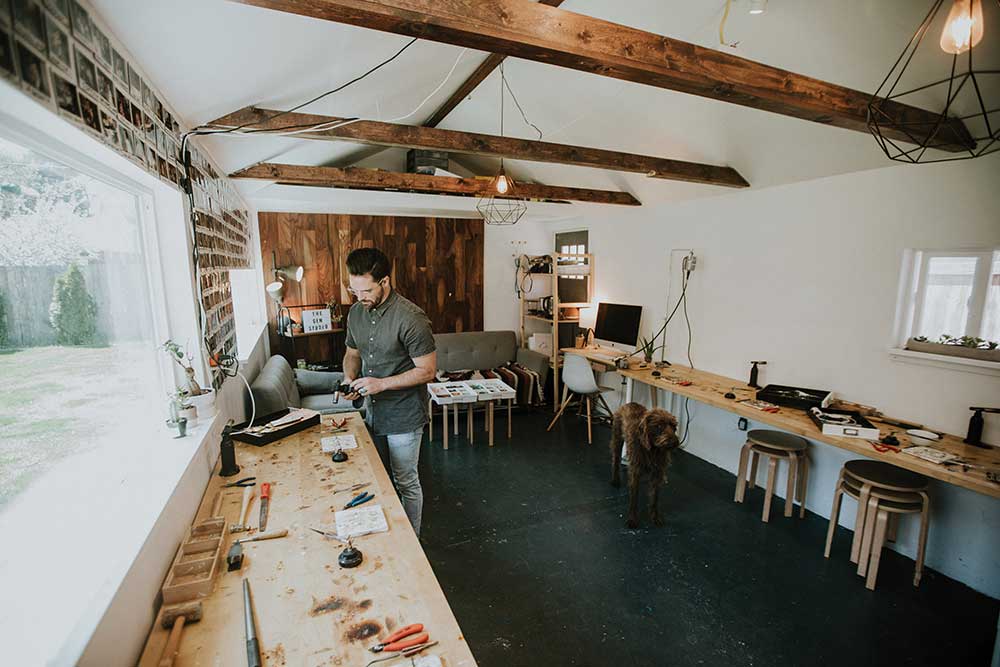 Matt James founded Gem Studio, and now humanitarian work is the crown jewel of his creation. Find the Provo business on Instagram @the.gemstudio.

What first started as a passion for wearing turquoise and silver jewelry led Matt James — founder of Gem Studio in Provo — to learn how to silversmith. After witnessing how simple and fun it was to make rings for himself, he began creating rings for gifts.

“All of a sudden, I had friends coming over because they wanted to learn, so I began teaching them,” Matt says. “I enjoyed watching them create, and I realized there was a high demand for my kind of jewelry.”

Shortly after beginning informal classes for friends, Matt transformed his 250-square-foot garage into a studio where he now hosts daily workshops to teach how to form rustic, vintage gemstone rings.

A Provo native, Matt has always felt the responsibility to make the world a better place.

“I’ve won the lottery of life, and with that comes the responsibility to leave a mark in this world,” he says.

Matt fosters an environment of creativity, where people feel comfortable to try new things, explore their artistic side and learn the value of the process.

“It brings a sense of confidence and satisfaction,” he says. “A lot of people come here to escape the woes of the world.”

Matt’s long term-goal is to manage the business while traveling the world doing humanitarian work, but he’s not waiting for “future Matt” to move forward on those plans. He has already started an orphanage in Uganda, and he is working on a project in Nepal where he teaches former sex trafficking victims how to silversmith. Both projects have been funded by the Gem Studio.

“My personal mission is to connect the wealthy world with empowering projects in the third world,” Matt says.

Everybody has a story: Glass-half-full kind of life Previous post

Break bread in our neck of the woods: The Shops at Riverwoods serves up Seven Brothers and The Crepery Next post