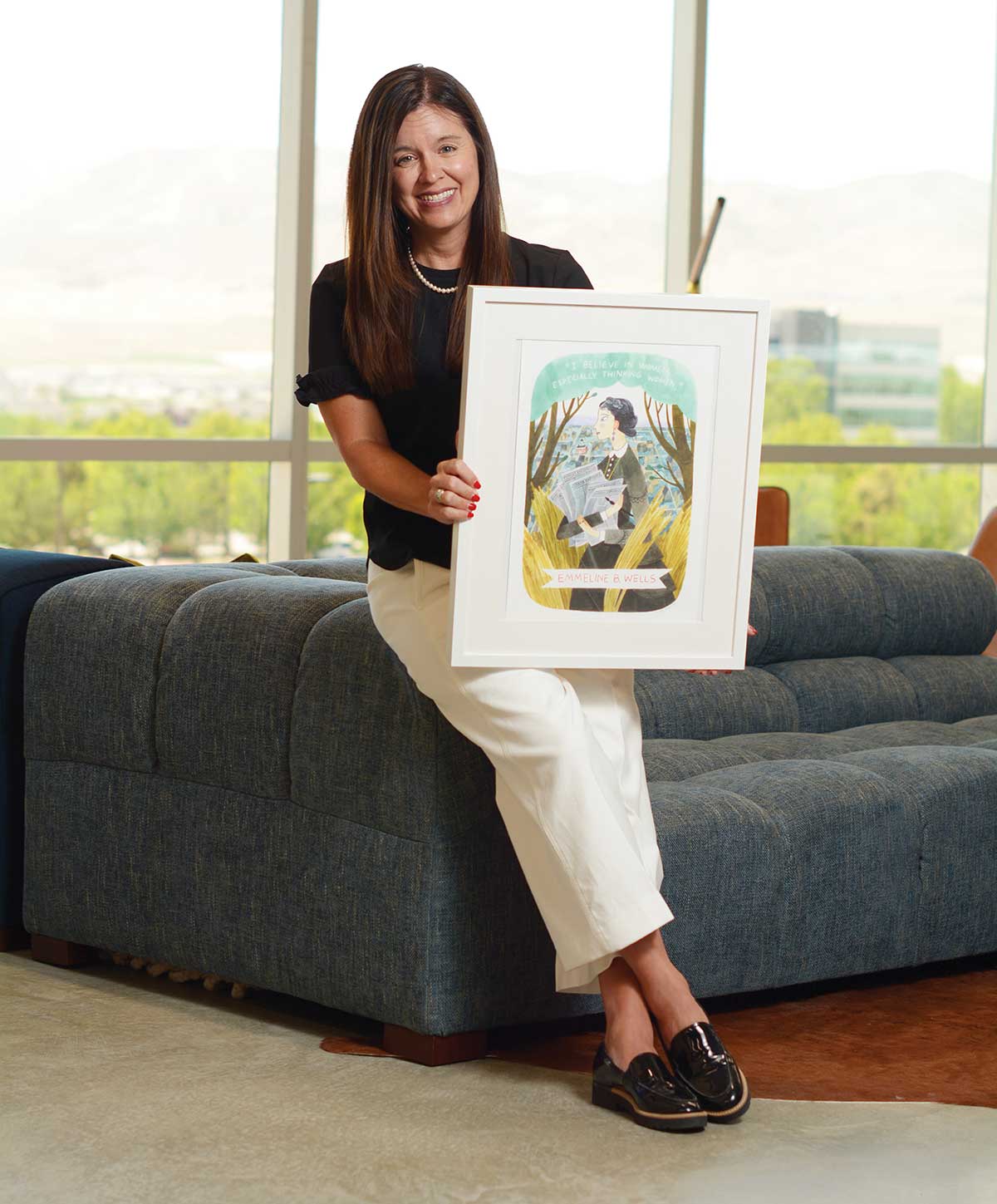 Mandee Grant is the mother of four boys and one daughter and was recently accepted into the Executive MPA program at BYU. Her career has included marketing and business development for organizations including Franklin Covey. Now she’s the co-founder and COO of Better Days 2020, an organization building public awareness of Utah’s incredible history in the women’s suffrage movement. (Photo by Dave Blackhurst/Utah Valley Magazine)ant,

When Mandee Grant returned to college to finish her bachelor’s degree, she researched a paper on the evolution of women throughout the history of Mormonism. Coming across the story of Emmeline Wells changed Mandee’s trajectory — and that of Utah as a whole.

“Emmeline was the leader of suffrage in Utah and spoke across the nation advocating for women to have the right to vote,” Mandee says. “Reading about her accomplishments validated my own personal aspirations. I was completely inspired by her.”

Simultaneously, Mandee was coming across articles portraying Utah as the worst state for women in terms of employment, salaries and cultural stereotypes.

“I wondered why we weren’t talking about the history of women in Utah, and I wondered how it would impact the current statistics if we were all more aware of the efforts of women in our state’s early history,” Mandee says. “Utah has an incredible, illustrious background of being the leader in the national suffrage movement.”

Mandee reached out to acquaintance Neylan McBaine, largely known for starting the Mormon Women Project and writing the landmark book “Women at Church.”

The two women formed Better Days 2020, which has gone from a conversation, to a list of ideas, to curriculum developed to teach schoolchildren Utah’s exceptional history of women’s suffrage, to events bringing light to Utah’s contributions to women’s rights, to renaming of streets and even a feature film in the works.

The non-profit is funded via corporate sponsorships and state budget allocations.

“The community has been amazing as they see the power of changing the perception of Utah and specifically Utah’s women,” Mandee says. “Our corporations and our citizens will all benefit from Utah and the nation being aware of our powerful women’s history that truly led the nation 150 years ago.”

Mandee’s personal mission is for women and men to know the stories of Utah’s leading women in the 1800s and to see how knowing our past can change the present and the future.

“Emmeline’s story impacted me personally, and it has the potential to do the same for women across the state,” Mandee says. “Today, women talk about embracing their ‘and.’ Emmeline absolutely did that. She was a wife, a mother, editor of The Exponent, an advocate for suffrage, she ran for office, she ran her household, and she knew the impact education had in her life and wanted every woman to be educated and financially independent — whether she was married or not.”

The team at Better Days 2020 has developed creative, fun and accurate curriculum, which is available at utahwomenshistory.org for teachers and parents to use as they share stories and lessons from before electricity was invented and before Utah became a state.

For more information on upcoming events — including “Party Like It’s 1895” — visit betterdays2020.com.

The genesis of Better Days 2020 was when Mandee Grant learned about Emmeline Wells and her leadership in the 1800s. The organization wants Utahns to have the same educational and inspirational experience.

One of the many strategies in place uses original artwork. BD2020 commissioned Utah illustrator Brooke Smart to create portraits of dozens of Utah’s key women’s rights leaders from 1870 through the 20th century. The illustrations are available in trading cards, postcards and posters.

In addition, the art of music is helping to reignite Utah’s history. In 1892, a Utah Women’s Suffrage Songbook contained lyrics by Utah women as they worked toward equality. Better Days 2020 is commissioning musicians to set poems to music.

Everybody has a story: Glass-half-full kind of life Next post