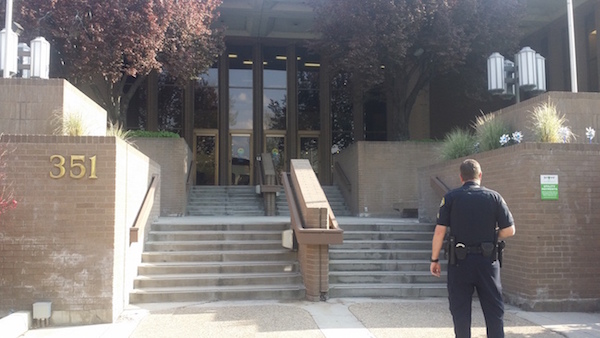 Provo City is inviting residents to tour the city center.

Moving the Provo Police Department and city hall to the mall is still on the table. But the Provo City Council decided Tuesday night not to pay the mall owners $350,000 — yet — to take the old Sears property off the market for six months.

The council voted unanimously to move the decision to Aug. 7. Between now and then, residents can tour the buildings to see why Provo needs new buildings. The tours of city hall, the police department and Fire Station 2 will be from 6-8 p.m. on Wednesday, July 25 and Tuesday, July 31. People also can tour the buildings from 9-11 a.m. Saturday, July 28. The city hall and police are on the 300 block of west Center Street, and Fire Station 2 is at 2737 N. Canyon Road. Provo Towne Centre is opening the old Sears building for tours from 6-8 p.m. on Friday.

“I feel like at this point, being fiscally responsible, I don’t feel comfortable putting that money down and taking it from taxpayers,” said Mayor Michelle Kaufusi. “Three-hundred and fifty thousand dollars is a lot of money. I would not put that on taxpayers and have nothing come out of it.”

She said she prefers the city vet the options. And then once it chooses an option or direction that’s when the council should make the decision on the money.

Provo has been looking at replacing or moving the city hall and police for at least 10 years, said Wayne Parker, Provo’s Chief Administrative Officer.

The city will need to bond to buy a property, remodel or build, and it has until Aug. 22 to decide to put the bond on the ballot. The Sears option is the least expensive, at about $45 million. The all-new buildings option is the most expensive choice at almost $60 million.

The city council and Kaufusi are working on a joint statement about the issue. It will say that they support doing something about the city center, and invite the public to weigh in on the various options. City officials say the building isn’t safe. If an earthquake happened, people — including vital first responders and police officers — would be injured or killed. It also doesn’t meet the needs of the city anymore. In fact, the No. 1 reason Provo has trouble retaining and attracting police officers is the state of the building.

Parker said four years ago, the city considered building a smaller but taller building at the existing city property. And then it would have redeveloped the rest of the land. But it couldn’t find an affordable solution. It also looked at the old Ancestry.com building, but ultimately decided it wouldn’t meet the city’s needs.

In the next few weeks, the city will post more information about the options on social media, its website, and the mayor‘s and city council blogs.