15 things to love about Sundance’s summer production of ‘Oklahoma!’ 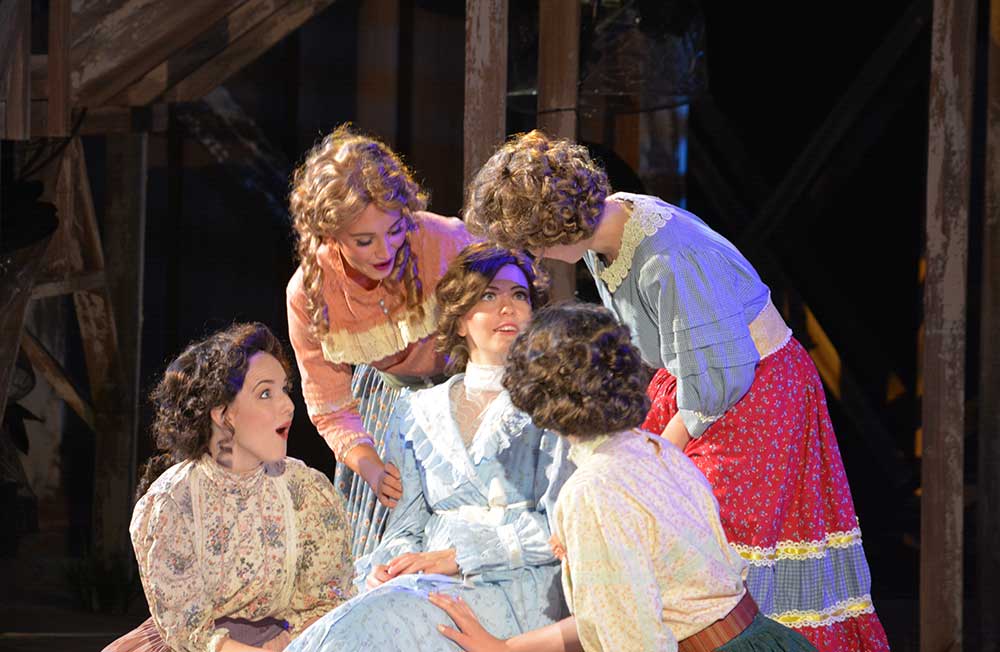 The women in the cast of “Oklahoma!” gather around Laurey, played by Hannah Pyper Dalley. “Oklahoma!” is playing at the Sundance Theatre from July 19 – Aug. 19. (Photo by Matt Bennett/UV360) 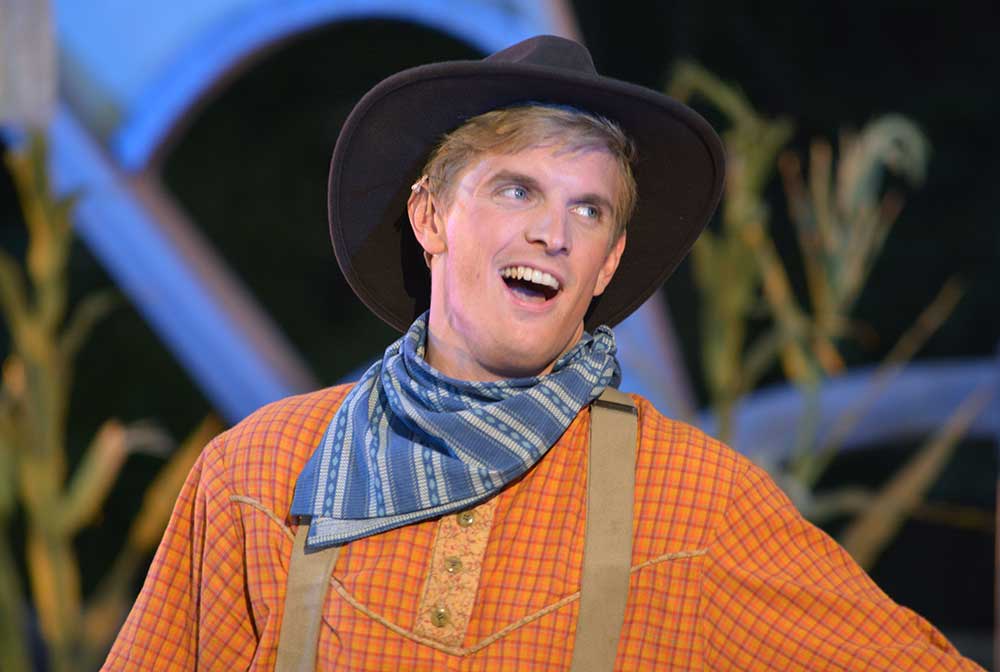 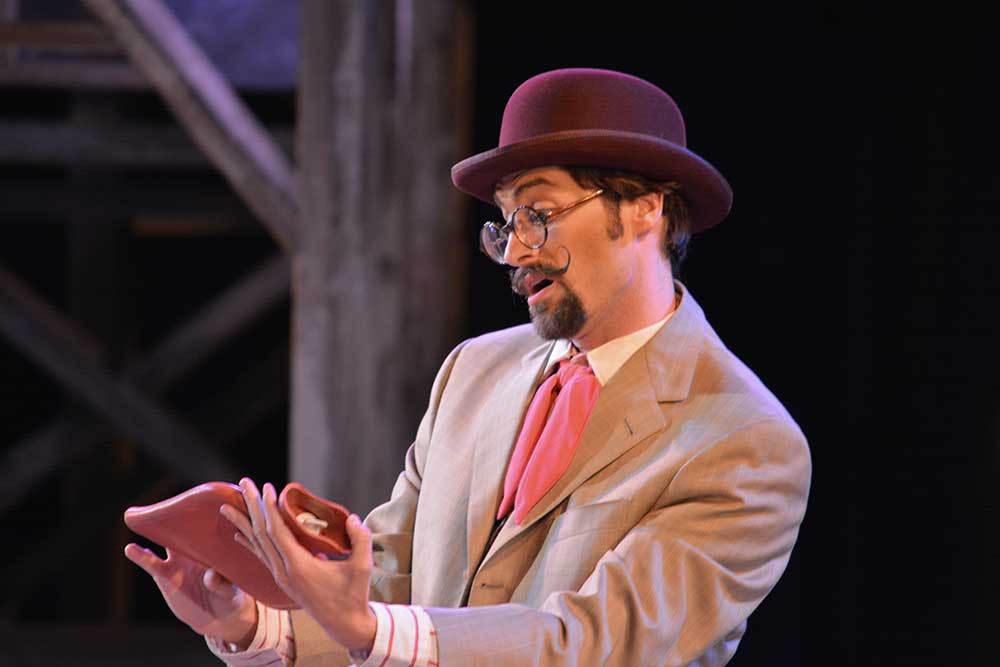 Paul McGrew’s acting as Ali Hakim, the peddler man, is entertaining from entrance to exit. Part of his charm is his very twirly and curly mustache, which truly plays its own character in the show on McGrew’s face. 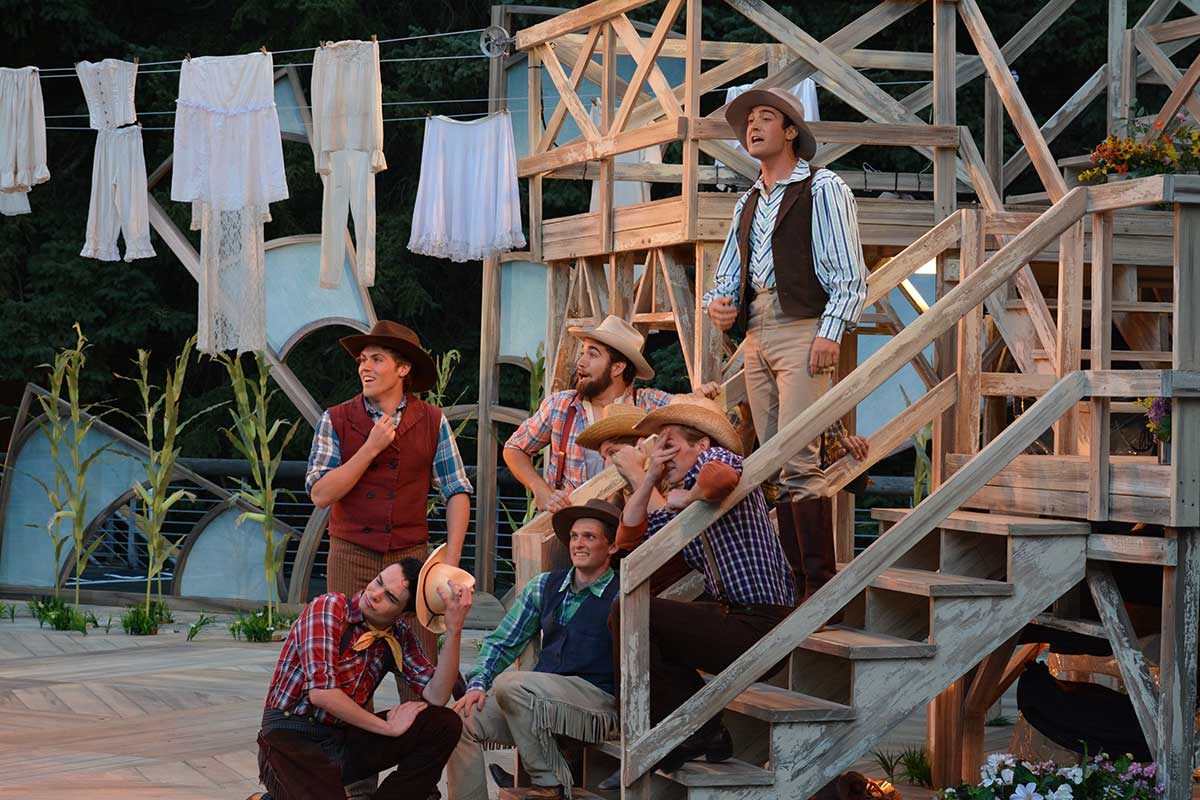 As you enter Sundance’s enchanting atmosphere, you don’t expect the set to look as beautiful as the surrounding mountains and trees. But beautiful staircases frame the stage and emphasize the gorgeous giant windmill backdrop. 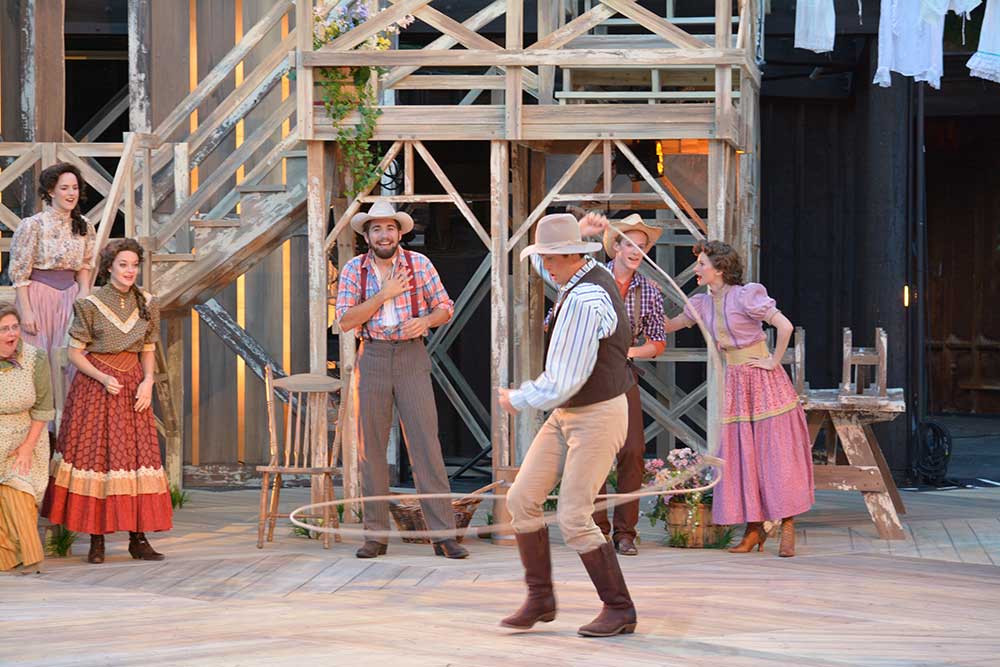 Above and beyond for his part, Will Parker (played by Thayne Caldwell) swings on stage, and ropes you into the show. Literally. 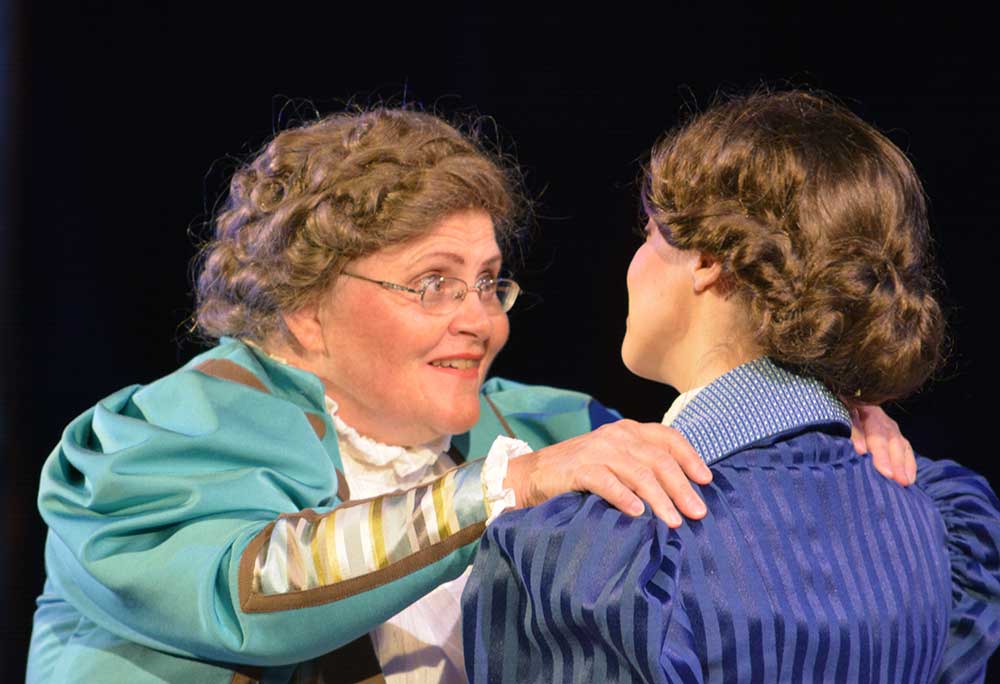 Used by Laurey, played by Hannah Pyper Dalley, and Aunt Eller, played by Laurie Harrop-Purser, a giant fly-swatter-like contraption is used to shew Curley away. “Make himself get outta here, telling me lies!” Having starred at Sundance previously as Dorothy in “The Wizard of Oz,” there were high expectations for Hannah Pyper Dalley, which she exceeded in her role as Laurey. The story and emotion exude from her eyes.

Spoiler alert! There are three gunshots in “Oklahoma!” They shock you from you seat, and add so much reality to the show. 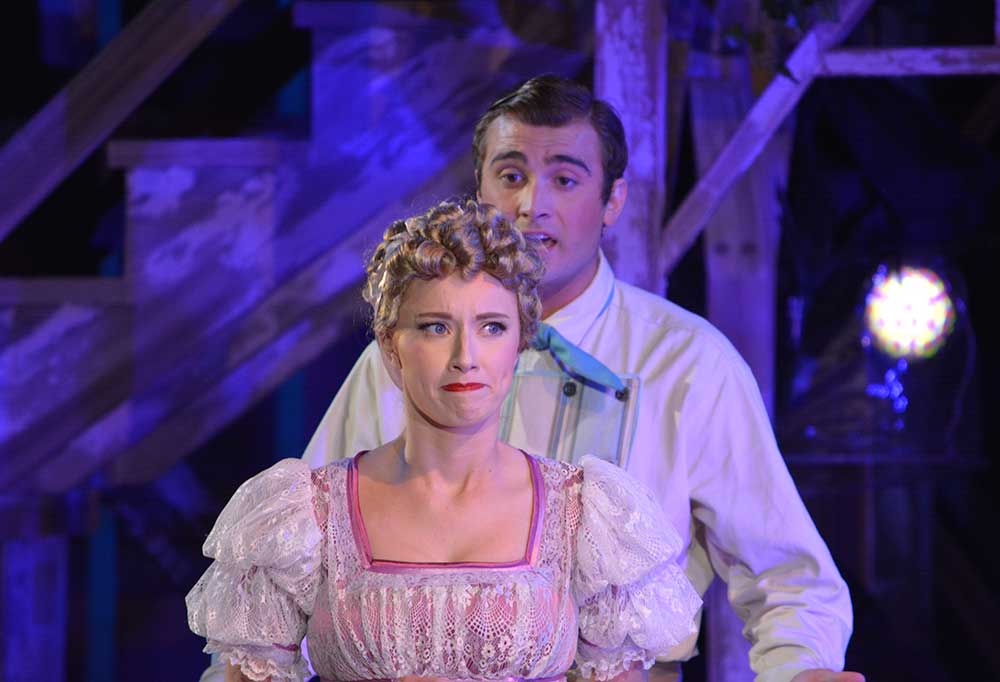 Whether delivering jokes deadpan, or giving the cheesiest smile ever seen, there is never a dull moment with Rachel Bigler as Ado Annie. She can’t say no — and we can’t either. 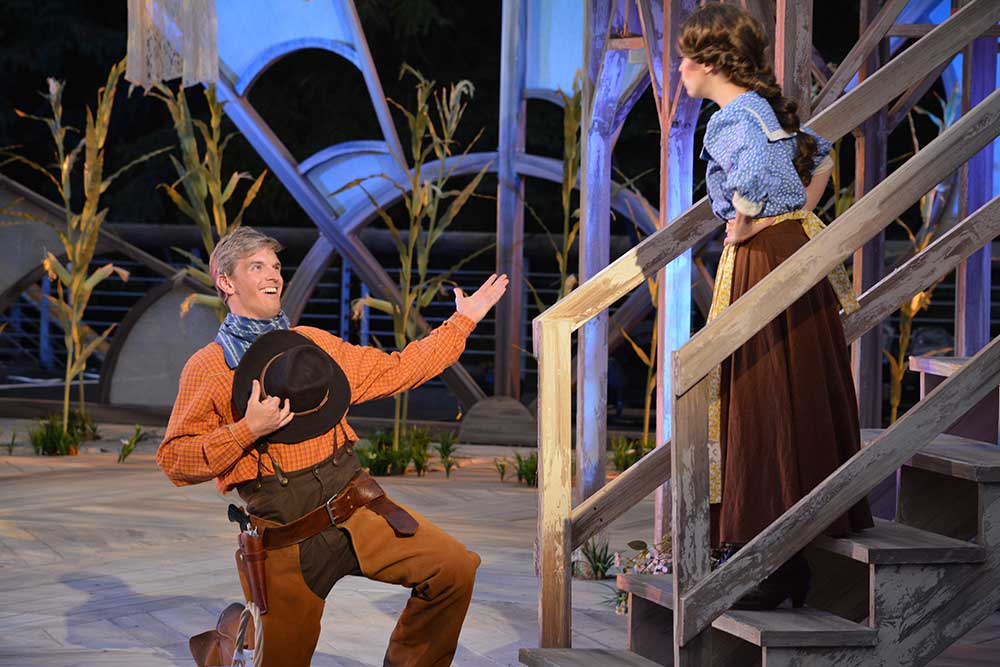 Every line and every song can be heard perfectly throughout the whole performance. Voices were evenly balanced with the music, which translated through the microphones and across the lawn for an evenly distributed level of sound. 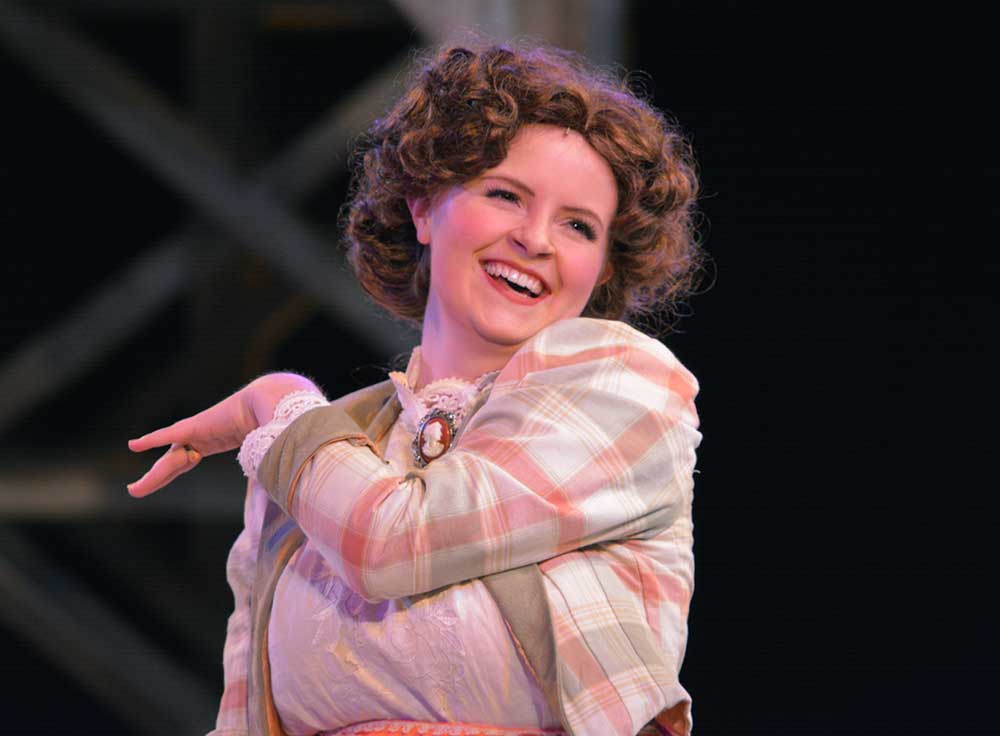 Charli Purser gives the most hilarious laugh with the best comedic timing throughout the show as her annoying character, Gertie Cummings. Whether between Ado Annie and Gertie Cummings over a guy or Curley and Jud over Laurey, the fight scenes were impeccable and believable the whole time. We hope that head-butt doesn’t hurt tomorrow morning, Gertie. Although it looked like it might. 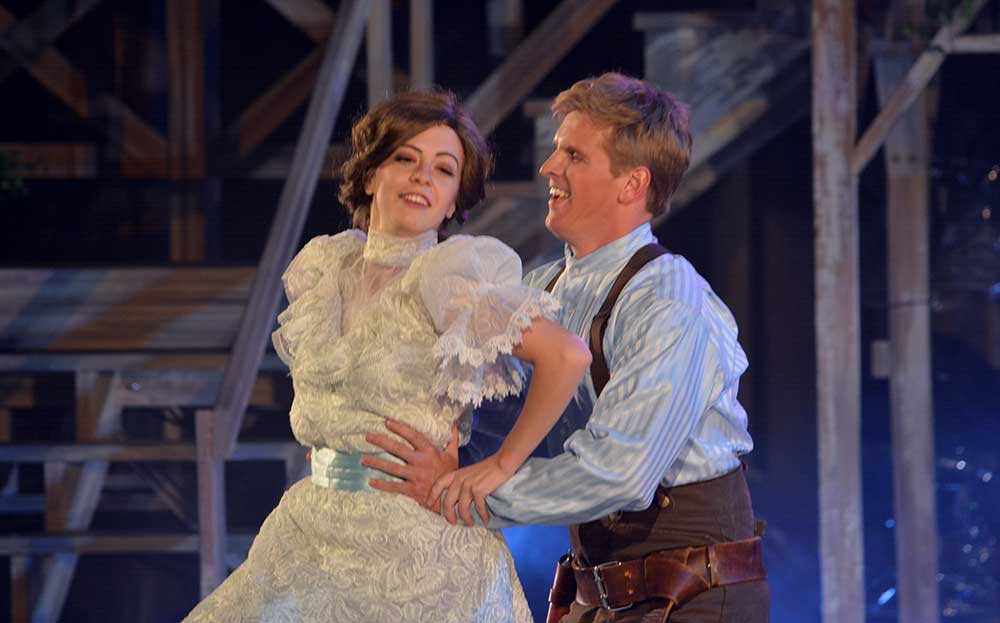 One of the best reveals in the show, is during the dream ballet sequence when Laurey (Dalley) reveals a beautiful lace dress underneath her robe. Her dancing allowed the audience to see ever angle of the exquisitely constructed gown. Throughout the whole show, every face onstage is engaged in the story 100 percent of the time. Choreography Nathan Balser orchestrated gorgeous dances, which the cast executed precisely. Speaking of the cast, the singing was genuinely as beautiful as the mountain scenery surrounding the stage. 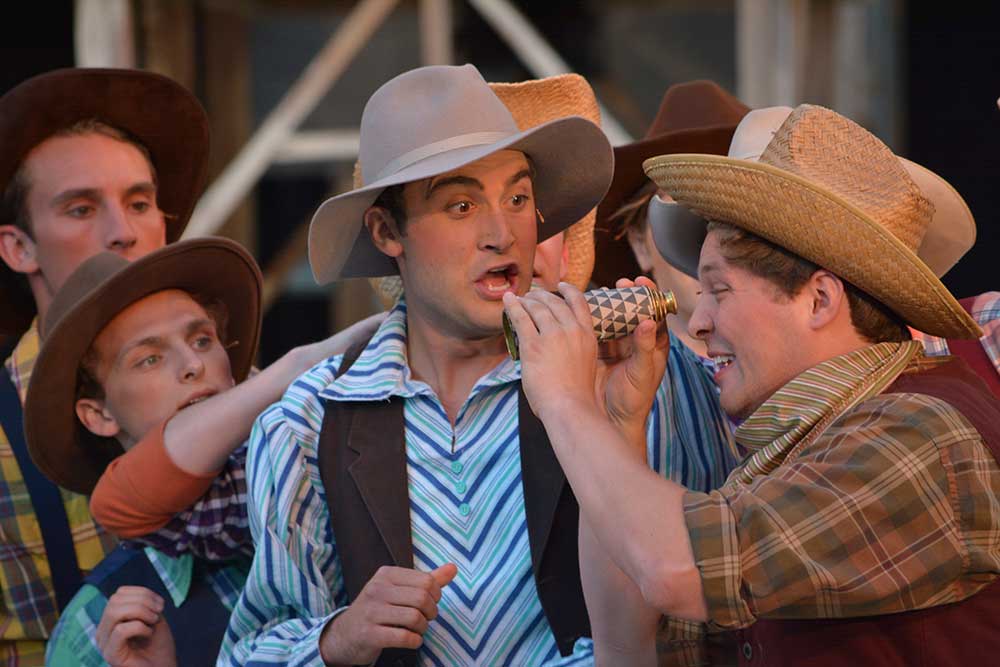 The whole show is brilliantly executed, framed by impeccable lighting that helps tell the story.

15. Surrey with a fringe on the top

The grand finale lives up to its adjective — it’s grand. Involving the entrance of a surrey with a fringe on top, promised by Curley in the beginning of the show. There was a wonderful ending to a wonderful musical. 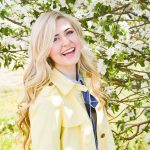 Hailey Bennett graduated from Lone Peak High School in May 2018. An actress herself, Hailey loves both watching and performing in musicals. She will start as a freshman at BYU in the fall. Hailey is currently interning at Bennett Communications.