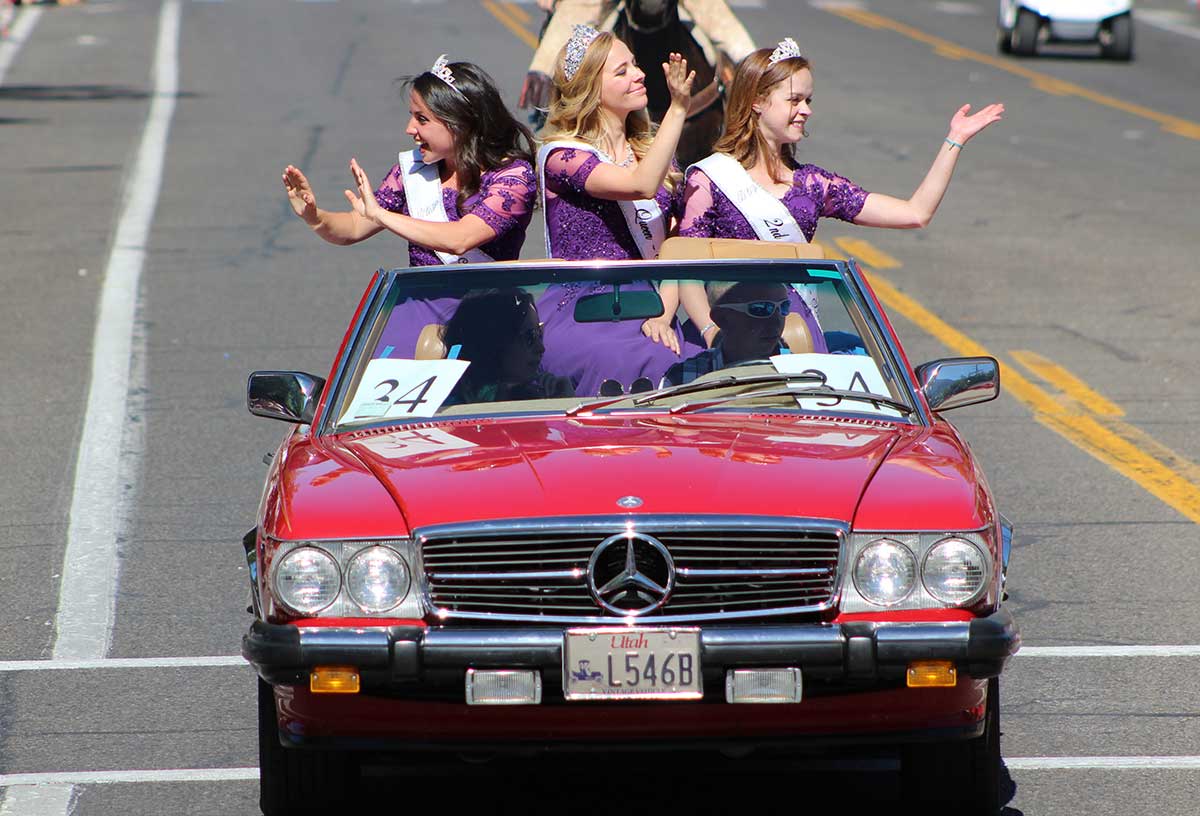 How do you make Utah’s pioneer heritage relevant to people in today’s fast-paced, technology-driven world? This year’s Days of ’47 Royalty has blazed its own trail in the social media scene and through service to connect Utahns old and young with their rich pioneer legacy and one another.

The Days of ’47 Pageant is part of a larger celebration of Utah’s early and modern pioneer heritage. This year’s theme of “Pioneer Stories – Foundation for the Future” draws parallels between the pioneers who braved hardships to settle the Salt Lake Valley and today’s rising generation.

To reach that rising generation, Days of ’47 queen — and BYU student — Lauren Bell and her attendants, UVU student Heidi Farley and BYU alumna Rachel Roy, have upped the pageant’s presence on social media. They’ve given the pageant’s Facebook and Instagram feeds new life by creating engaging stories leveraging the platforms’ newer features, hosting giveaways and sparking conversations about everything from Miss America ditching its swimsuit competition to fathers’ influence on Father’s Day.

“Social media has an incredible influence on the lives of almost every man, woman and child here in Utah,” Farley said. “In one way or another, we recognize that social media is the way news spreads and people stay informed. From the beginning of our turn as royalty, one of our main goals was to use social media to reach out to the younger generation. We want to raise awareness of what we do and how others can get involved.”

Bell said her goal is to spark interest in Utah’s pioneer heritage in a way that helps her generation draw strength from that legacy of fortitude and faith. 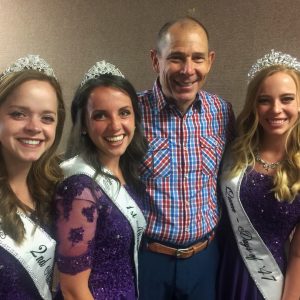 “If our ancestors could overcome their challenges, we can overcome ours,” she said. “We are pioneers just like them! We may not struggle in the same ways, but we experience discouragement, hope, sorrow and joy just like they did. They understood their responsibilities as part of the pioneer generation that paved the roads for those who followed. We need to understand our responsibilities as part of the new pioneer generation.”

The trio spends much of their time in service, from speaking engagements to charity events, and has been making the rounds on local news shows. Recently they sang at a pioneer-focused devotional featuring Elder Gerrit W. Gong of The Church of Jesus Christ of Latter-day Saints’ Quorum of the 12 Apostles, reiterating the pioneers’ relevance to today.

While social media and TV appearances broadcast to the masses, however, the members of the Days of ’47 Royalty focus their in-person connection on the individuals they meet at events throughout the state.

“We have all made it a goal to maintain a ‘one by one’ perspective as we attend events,” Farley said. “To us, this means to really take time to minister and love the individuals that we get to meet and interact with.”

As they reach out, the trio seeks to help those they meet see their own potential, Roy added.

“We love looking into people’s eyes and getting to know a little bit about them,” she said. “Our messages are geared to inspire and lift them. The youth face many unique challenges. The pioneers demonstrate how they can have courage to stick with their morals and values, as well as spread light as darkness increases in the world.”

MEET THE DAYS OF ’47 ROYALTY

Lauren Bell, Queen
Age: 22
Hometown: San Clemente, California
University: BYU, studying speech pathology
Favorite thing about Utah: The mountains! I go hiking at least twice a week. (Iceberg is a close second.)
Pioneer you admire most: My ancestor, Elizabeth Panting, is a source of personal inspiration to me because of her incredible courage and perspective. She was born and raised in England, where she lived in abject poverty, was married to an abusive alcoholic, and watched four of her children pass away. When she heard about the Zion being built in Utah, Elizabeth knew that she wanted to be a part of it — and that more than that, she wanted her children and her descendants to be part of it. Even though her husband threatened her life if she left him, she made her way to Zion, overcoming overwhelming obstacles. Elizabeth inspires me to choose important goals, to fix them in my mind as the destination, and to do whatever it takes to reach them. She inspires me to remember that I live not only for myself, but for future generations. 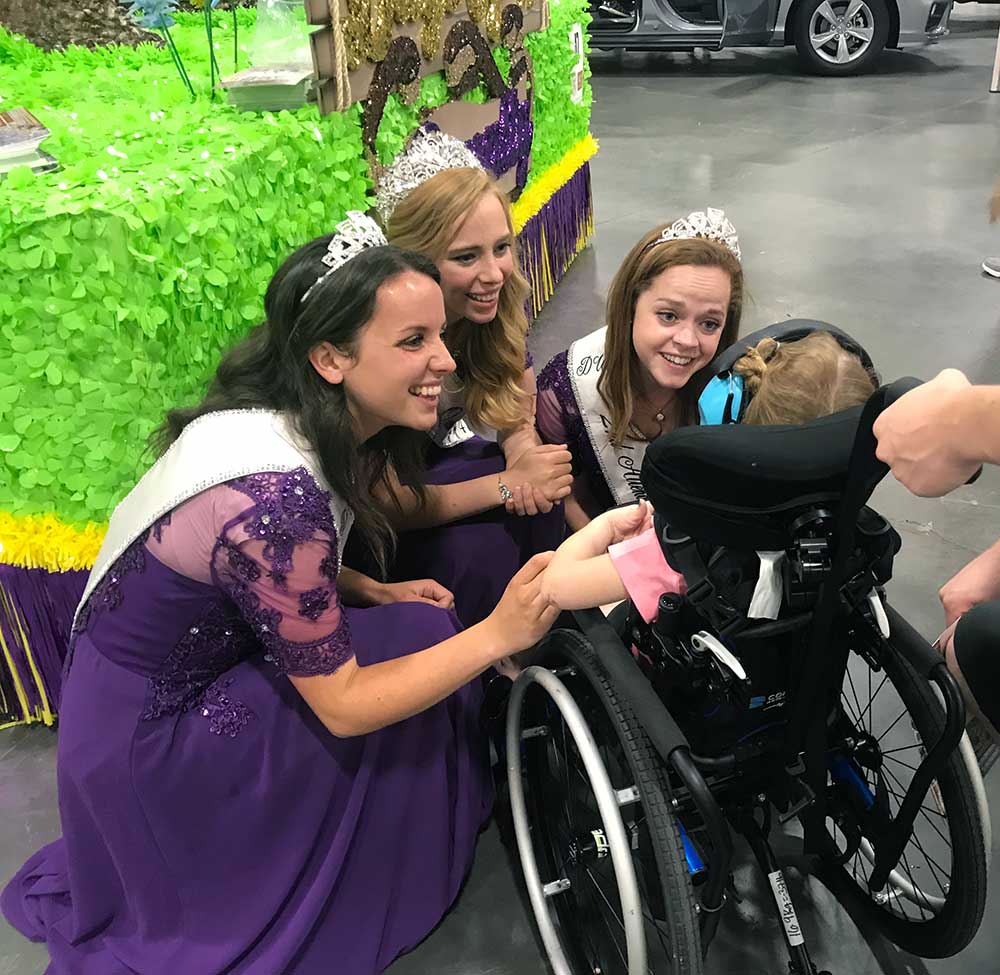 The Days of ’47 royalty meet guests at the Float Preview Party at Mountain America Expo Center in Sandy on July 16 and 17. (Photo courtesy of Days of ’47)

Heidi Farley, First Attendant
Age: 22
Hometown: West Jordan, Utah
University: Soon to be UVU, studying exercise science
Favorite thing about Utah: I love … how beautiful Utah is. From the very northern part of Utah to the very southern part, there is such a variety of scenery and places to visit. I have grown up camping in several of Utah’s mountain ranges, boating at many lakes and reservoirs, hiking in the red rocks of southern Utah, and driving up an autumn-painted canyon in the fall. Utah is beautiful!
Pioneer I admire most and why: I really admire my great-great-great-great-great grandmother, Susan Hammond Ashby. She doesn’t play a significant role in history; she didn’t do anything that changed the world. But, because of my grandmother’s faithful obedience and perseverance, my family made it to Utah and has the blessings of the gospel. Susan’s husband died on their trek west from Nauvoo with the early Saints and was left to watch over 11 children. She continued on her journey and continued to minister and serve others, including her many children. It has been said of my grandmother: “Susan Hammond Ashby was a woman of great faith, spending much time among the sick, where she was very capable. Being always cheerful and optimistic, she scattered happiness along her path. When she died, Elder [Erastus] Snow said of her, ‘I wish there were more women like Sister Ashby. Her undoubting faith in the Lord, her integrity and patience in the face of poverty and death, sets forth a standard that urges us forward, though we may never be able to attain that standard.’” I am grateful for an ancestor that had such great faith and lived her life in such a way that she was looked at as that great of an example. She inspires me to try a little harder to be a little better and to be more consistent at doing the small and simple things every day.

Rachel Roy, Second Attendant
Age: 25
Hometown: South Jordan, Utah
University: BYU alumna, received bachelor’s in exercise and wellness and minor in family life
Favorite thing about Utah: I love how close the temples are in Utah and all the outdoor recreation activities that are available.
Pioneer I admire most: I admire Zachariah Wise Derrick because he was determined to remain faithful and was known for being positive, even during difficult times.

6 events to celebrate Pioneer Day in Utah Valley Next post