Home Featured One Utah County dancer advances, one falls in surprise round on ‘So You Think You Can Dance’

One Utah County dancer advances, one falls in surprise round on ‘So You Think You Can Dance’ 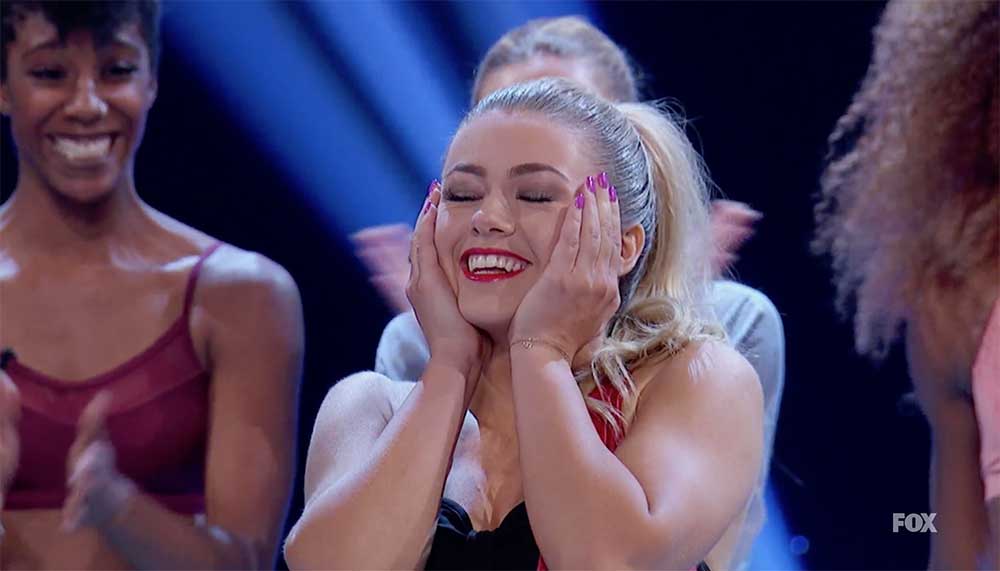 Provo ballroom dancer Jensen Arnold celebrates after being named to the Top 10 on season 15 of “So You Think You Can Dance.” (Screenshot)

Jensen Arnold survived a surprise round on “So You Think You Can Dance” to advance to the live show while fellow Utah County dancer Stephanie Sosa fell short.

While in the past the Top 20 dancers made it to the live show on the dance competition show, judge Nigel Lythgoe announced last week that only the Top 10 dancers would make it to the live performances, meaning five women and five men would advance.

For the new round of the competition, each dancer performed with an all-star, which is a competitor from a past season of “SYTYCD.” Arnold, 20, was partnered with Brandon Bryant, a Season 5 competitor who is a former dancer with Utah’s Odyssey Dance Theatre.

To challenge the remaining 20 dancers, the surprise round required the dancers to perform a dance style outside of their specialty. Arnold, a ballroom dancer from Provo, Utah, performed a Jazz routine to “Got it” by Marian Hill — and the judges praised her execution of the routine.

“You have matured so brilliantly. That was an absolutely sensational performance,” Lythgoe said.

“You really did give the most assured performance so far today,” Mary Murphy added.

When the Top 10 females returned to the stage to see if they made the cut, Lythgoe called Arnold’s performance the best performance of the day before telling her she made the Top 10.

Unfortunately, for Orem, Utah ballroom dancer Sosa, the day didn’t end so well. Sosa, 18, was cut after her comtemporary routine to “Limit to Your Love” by James Blake. She performed with Lex Ishimoto, the Season 14 winner of “SYTYCD.”

When the judges told Sosa she wouldn’t make it to the live performances, they said cutting her the hardest decision of the day.

“You gave us anxious moments in our decision,” Lythgoe said.

The judges also blamed their hesitancy to keep Sosa to their already advancing two other female ballroom dancer to the Top 10.

Sosa auditioned with her brother Tristen in LA. Her brother was cut in the first solo round of The Academy.

Before the live performances can begin, the men will compete for a spot in the Top 10 on next week’s episode of “SYTYCD.” The next episode will be broadcast on Monday, July 30 at 7 p.m. on Fox.