Home Featured A first look at Trader Joe’s in Orem

A first look at Trader Joe’s in Orem 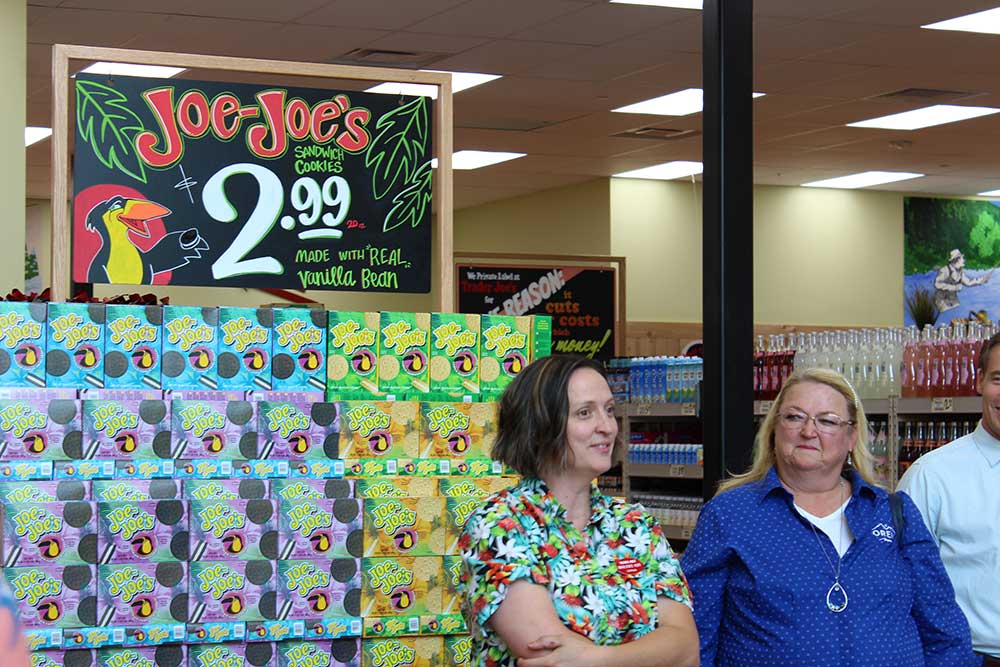 Marjorie Huff, the “captain” (manager) of the new Orem Trader Joe’s, gives a tour of the store on Thursday afternoon. (Photo by Rebecca Lane/UV360)

OREM, Utah – It’s been a long wait for Cookie Butter enthusiasts, but the wait is over. Trader Joe’s will officially open its doors for business at its new Orem location on Friday at 8 a.m.

The Trader Joe’s location in Orem was originally announced in May 2017. Both Orem and Provo residents started their push to attract Trader Joe’s to their individual cities in 2014. On Facebook, Orem asked its citizens to fill out a Trader Joe’s Location Request form online. While neighboring Provo also sent in requests and posted on social media, it was Orem that caught Trader Joe’s attention.

“I think it’s a validation of where Orem City is going economically that Trader Joe’s — after looking over other parts of the state for expansion — decided they wanted to come to University Place,” said Orem Mayor Richard Brunst, who attended the VIP store showing on Thursday afternoon.

Orem’s Trader Joe’s is located at 440 East Park Ave., west of Macy’s at University Place. This past week the construction crew finished the parking lot for the new specialty grocer, which included demolishing the old Big O Tires and Wells Fargo buildings located on State Street.

“They have a beautiful parking lot out front,” Mayor Brunst said. “They have a brand new store and beautiful visibility from University Parkway and State Street, which is one of the busiest intersections in Utah. I couldn’t think of a better place.”

Trader Joe’s hired around 80 employees for the Orem location, and the employees have been working for a month to prepare the 13,000-square-foot store for the opening.

“What makes Trader Joe’s so special is our passion for our customers, our unique products and the values of the company,” said Marjorie Huff, the captain (manager) of the Orem location.

The new Orem location is the third store in the state of Utah; the other two stores are located in Cottonwood Heights and Salt Lake City. Scroll below for a first look at the Orem Trader Joe’s. 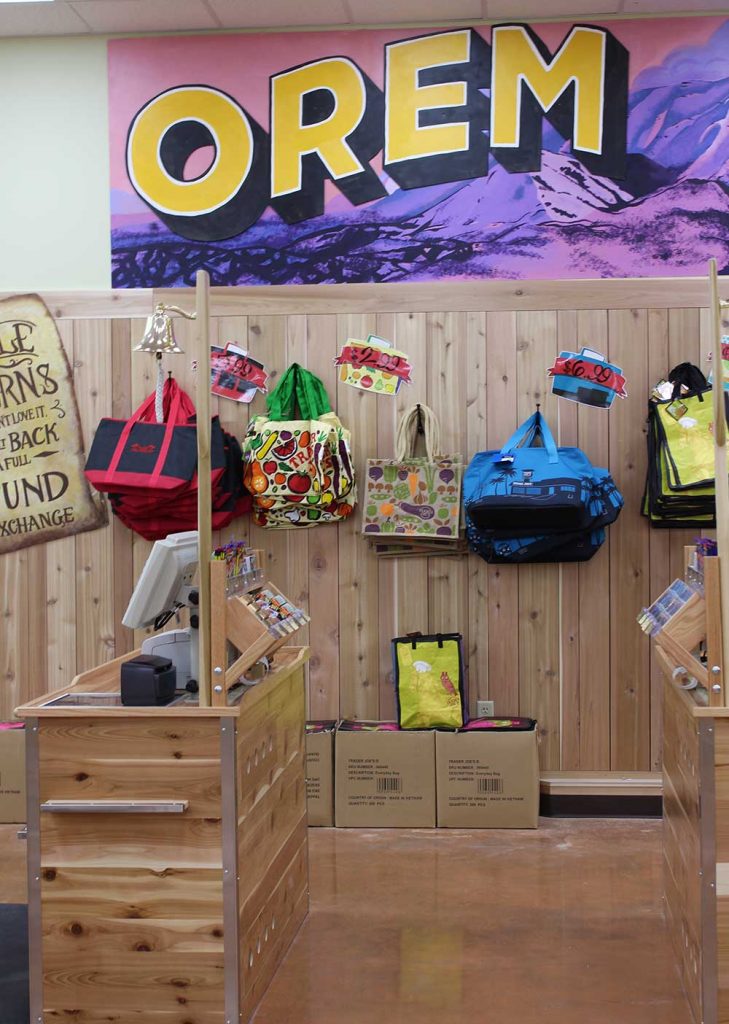 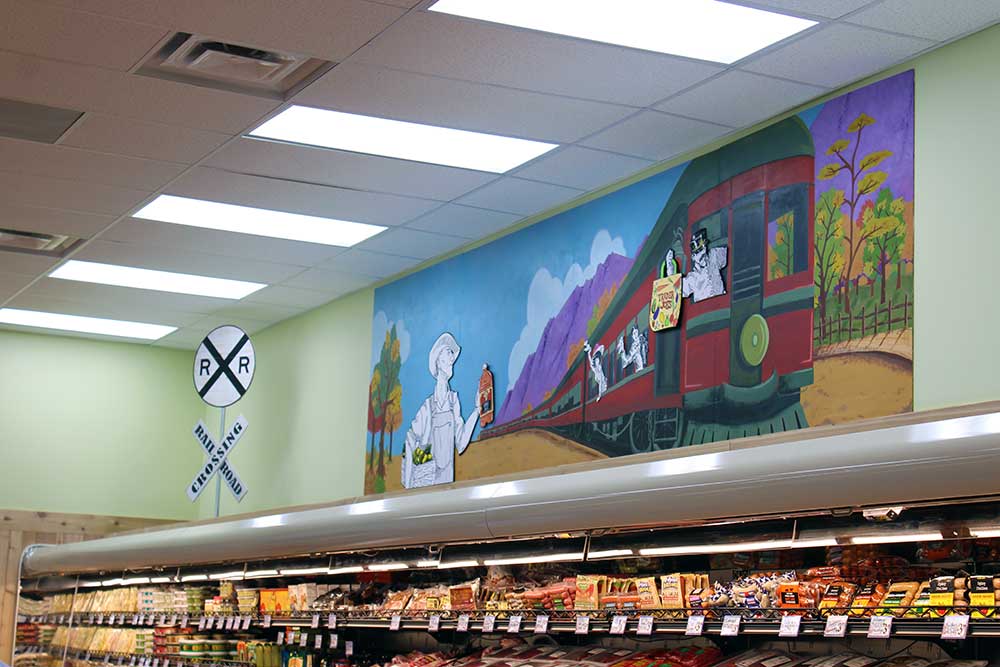 Huff researched Utah’s history to brainstorm design ideas for the murals on the walls. Then she hired an artist, who is part of the store staff, to bring the designs to life. 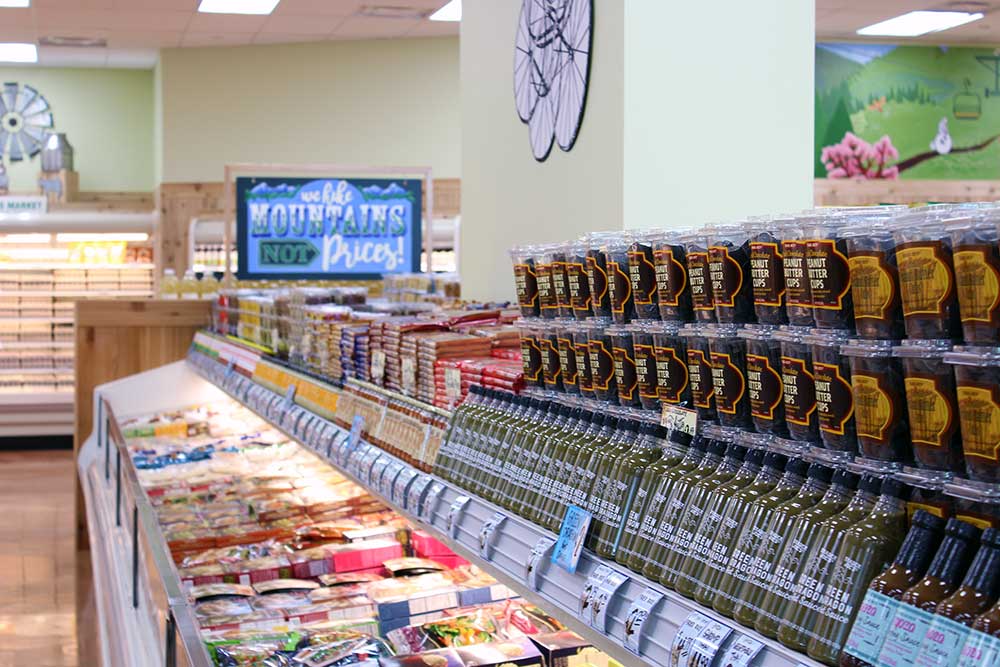 The witty signs around the store hint at Utah lifestyle. One sign read, “We hike mountains not prices.”

Trader Joe’s included logos from local colleges and high schools as part of the store decor. 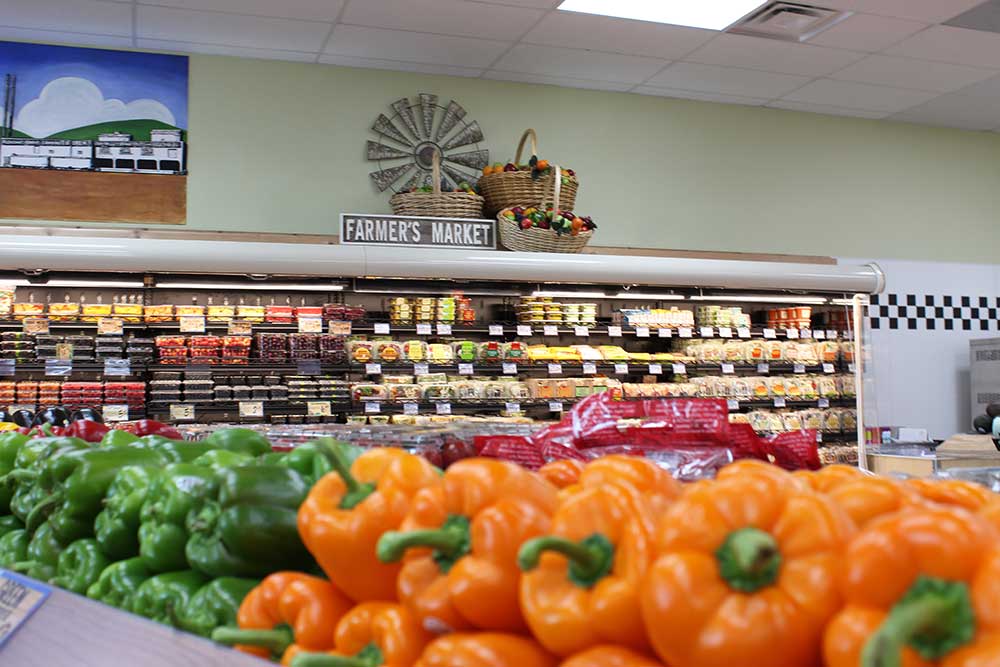 Trader Joe’s has fresh fruits, veggies, meats, cheeses and more. “They pride themselves in having really high quality in the items that they have,” Mayor Brunst said.

Joe to the endcaps 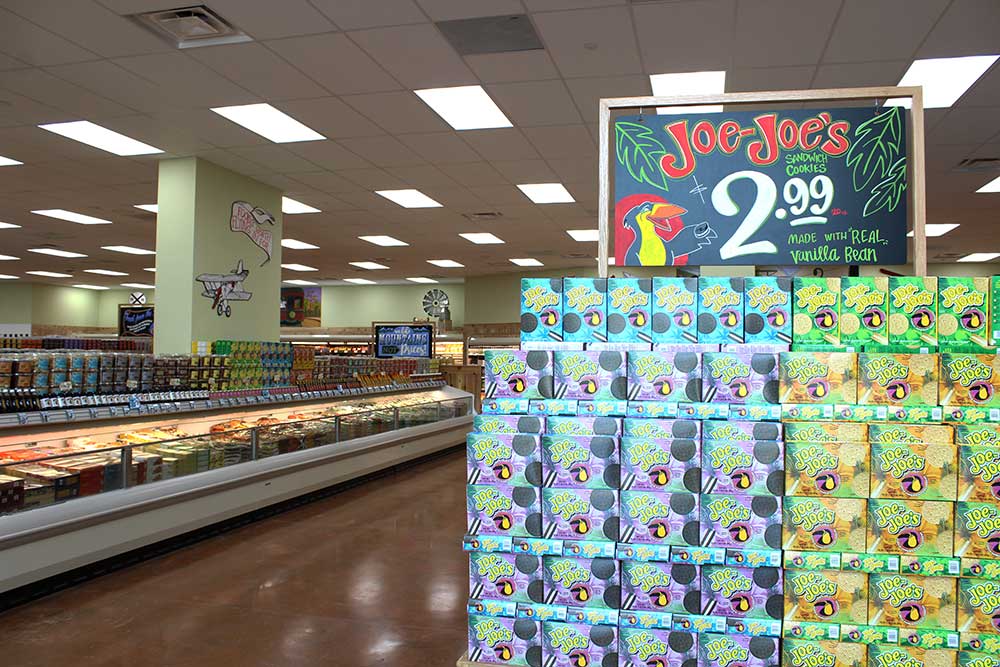 Many of Trader Joe’s most popular products are placed on the endcaps throughout the store so customers can easily find their favorites on opening day. 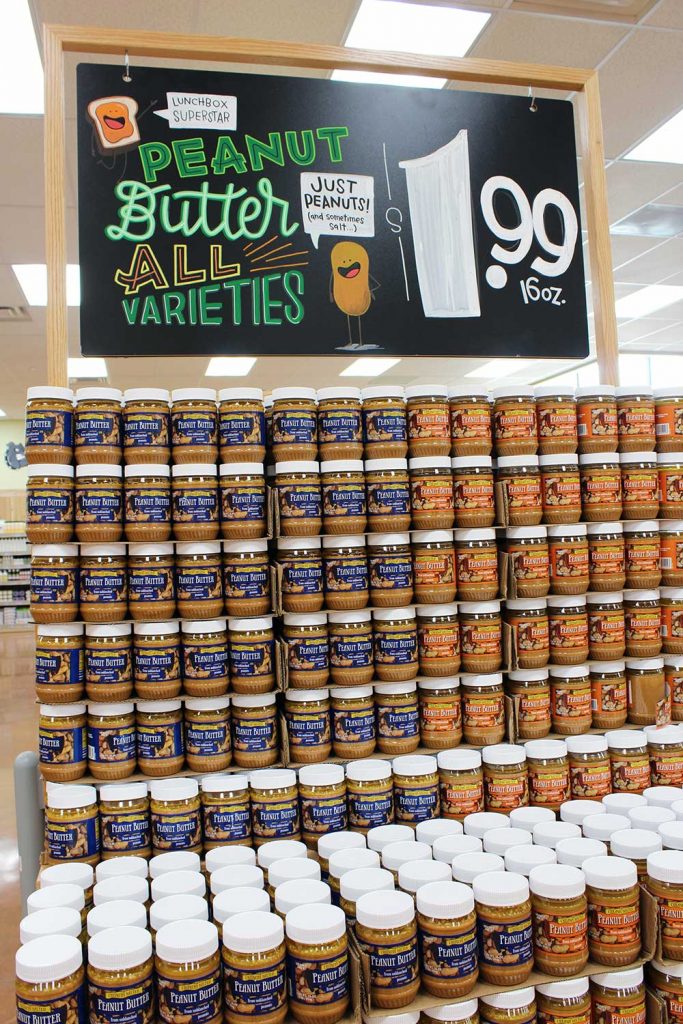 Trader Joe’s is known for its original trademarked products. “Trader Joe’s has about 80 percent Trader Joe’s labeled product, which means we bought directly from the manufacturer,” Huff said. “We eliminate the middle man, which we cut a lot of the costs that way. Then we go through and we eliminate the preservatives and GMOs and all the other artificial stuff out of our products and then put them in our label.”

Endcaps for the win 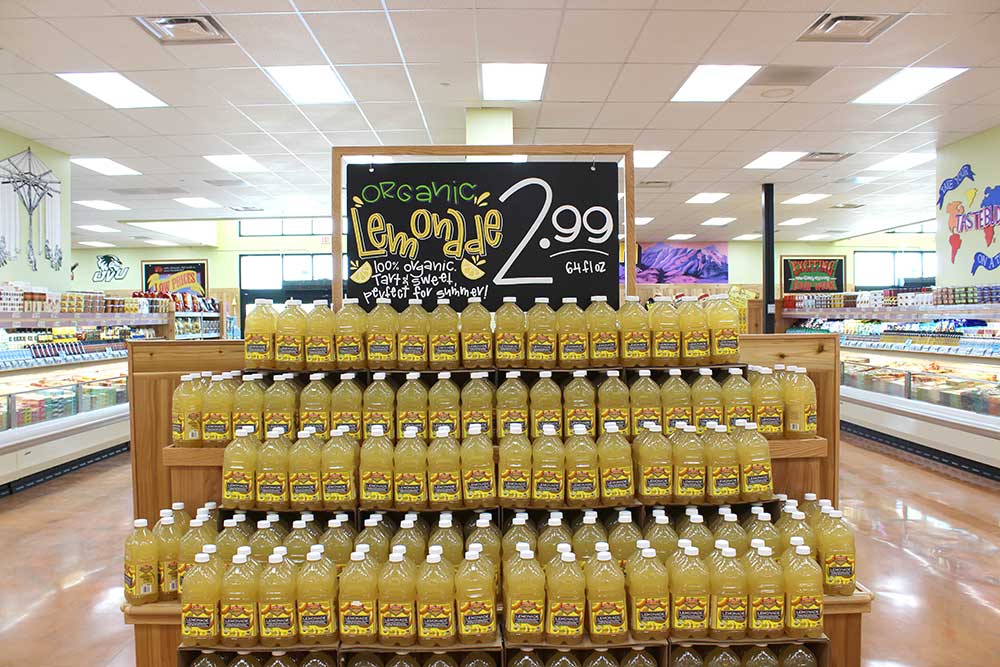 Huff said many of the frozen dishes, which are in the aisles beside the lemonade, are popular at Trader Joe’s. 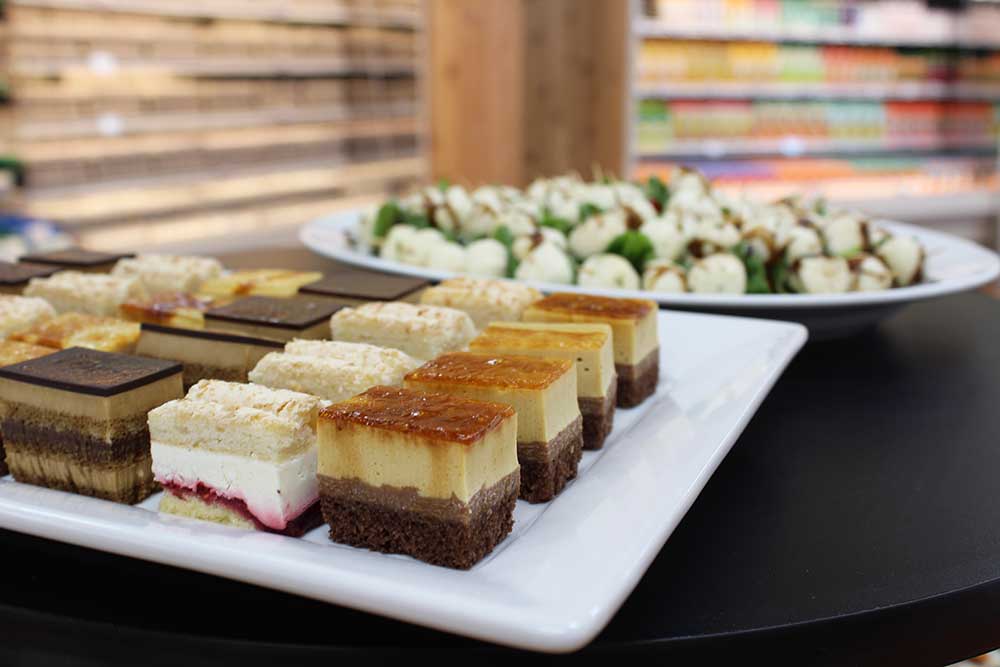 Before Trader Joe’s officially opens its doors on Friday morning, there will be a ribbon cutting at 7:45 a.m. There will be music outside as well as visits from college mascots in the morning. Plus, the store will be giving out samples during the grand opening.

Lindsey Stirling reflects on learning to love herself Previous post

UTA won't be done with UVX construction until fall Next post